Everyone is a winner... 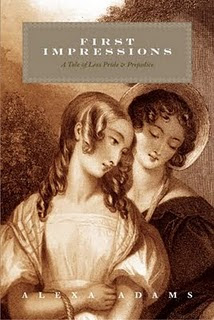 That is, everyone who entered. As there were only two participants in this, my final giveaway, I have decided to give both Giada M and Luthien84 a copy of First Impressions. They have been constant participants and deserve reward. So I only had to draw a name for The Darcy Cousins by Monica Fairview, and the winner is:


Giada M
Congratulations! I will get in touch with both you and Luthien84 via email in order to learn you mailing addresses. Thank you to everyone who has participated in the giveaways over the last month. It has been delightful.

Georgiana, during the course of a carriage ride to Rosings, listens as her obviously infatuated brother enumerates the many problems in seeking Elizabeth Bennet's hand in marriage in growing frustration. Boldly, she questions his hesitation, making several arguments against delay. They are (roughly) as follows:

1) Anyone whom Mr. Darcy loves must be extraordinary

2) The very nature of the trip to Rosings reveals the extent of Mr. Darcy's attachment

3) A lady like Elizabeth will not be available for indefinitely - other men will want to marry her.

4) Such hesitation is an insult to Elizabeth

5) Hertfordshire is situated at a great distance from Derbyshire

Here is the passage. Enjoy!

Rain pummelled the carriage as it departed London for Rosings, rendering the ride slow and dreary, but Mr. Darcy kept his sister well entertained by honoring her request to share every detail of his interactions with the extraordinary woman he had met in Hertfordshire. Unfortunately, in order for the account to be complete, it necessitated the inclusion of George Wickham, for he might never have declared his regard for Elizabeth Bennet had that man not made such an unwelcome appearance. He hesitated to mention him but recognized that if Georgiana faced the possibility of finding herself in the same neighborhood as Wickham, say for a wedding, perhaps, she best be forewarned. Georgiana took the news quietly, after several thoughtful moments eventually musing, “Perhaps then he has finally done some good in the world, if he helped you recognize your feelings.”
Darcy was proud and touched by her charitable response, but deemed it best to steer the conversation back towards more pleasant topics, “Does that mean I have your approval of the lady I have described?”
Eagerly forsaking thoughts of Wickham, Georgiana reviewed the details she had gathered on Elizabeth Bennet. Though they had never met, she felt instantly enamored with the woman who had such an astonishing effect on her brother, rendering him very nearly giddy. It had been many years since he had been so jovial – how could she not approve? Furthermore, she had always dreaded the idea of Darcy marrying one of the many Miss Bingley's who inhabited their world and a Miss Bingley seemed to be precisely what Miss Bennet was not.
“Oh most assuredly Fitzwilliam.” She leaned forward and asked quietly, with an air of secrecy, “Did she really walk three miles in mud to attend her sick sister?”
“She most certainly did and, it must be acknowledged, looked positively delightful upon arrival,” he smiled at the remembrance. “That does not mean that you should take to any similar notion should I ever fall ill. Sisterly devotion does not justify her behavior – she should not have proceeded thusly though, I cannot deny, I am awfully glad she did.”
“Well I think she sounds like a delightful lady, muddy petticoats and all. Of course, anyone upon whom you could bestow your love must be worthy.”
“I feared you might disapprove of her social status."
"You happiness is paramount with me, Brother."
"Miss Bingley just recently regaled me with the many horrors to be borne by an unmarried lady whose brother marries into the Bennet family.” He frowned and said quietly, “They certainly can be an unnerving clan.”
“But you do intend to ask for her hand?” Georgiana ventured.
“I certainly believe I will, though I have no intention of yet broaching the subject with Aunt Catherine. When I depict her for you, her family and circumstances seem insignificant obstacles: the mere backdrop to a comic theatric. It is in their company that I  wonder what foolishness this is I am entertaining. But then Miss Elizabeth walks into the room and I have eyes and ears for no one else. What is a man to do?”
“If you have so many doubts Fitzwilliam, than what madness is this that we pursue – rushing off to Rosings to put an end, once and for all, to Aunt Catherine's matrimonial ambitions? And on behalf of her rector, a man your profess to be adverse to, but whom you indulge for no reason whatsoever other than his relationship to a lady of unsuitable background?“
Darcy gave what for him was a sheepish smile, “I do not believe I ever used the word unsuitable.”
“Then why do you hesitate? Never have I observed a lady to have near this effect on you. I have longed for a sister such as you describe. If she is really as wonderful as you say, certainly she will not wait forever for you to make up your mind. She has a duty, after all, especially when one considers her familial circumstances, to marry well. She must find it rather insulting that you look so far down upon her relations; do you really believe she will remain available once another man has expressed his interest?” Georgiana had never spoken to her brother so forcibly and was surprised he did not seem to mind, let alone not call an immediate end to the conversation, as she had feared.
“Miss Elizabeth seeks not a mercenary marriage,” he replied with a slightest tinge of petulant indignation. “She wants what I do, a loving relationship. Were she able to find one in Hertfordshire, I have no doubt she would already be married. And indeed, she feels much the same about her relations as I do. The poor woman has been suffering their company all her life and I assure you, she is often mortified by it.”
The vehemence of his defense only served to convince Georgiana that he had better hurry up and marry the lady. She breathed deeply before proceeding: “Then why not rescue her from her predicament?”
Darcy sighed, “Would marriage rescue her? When you stretch an arm towards a drowning man, the odds are you shall soon both be floundering in the water.”
“But we live in Derbyshire, they in Hertfordshire!” Georgiana was beginning to feel exasperated with her brother. “Surely you would rarely see her family.”
“There is truth in that,” he mused reflectively. “When did you become such a wise young lady?”
“I have had the benefit of my brother's excellent example to guide me.” They shared a loving smile and the conversation ceased, both siblings consumed with their own thoughts for the remainder of the journey.
Posted by Alexa Adams at 7:20 AM