The Importance of Being Emma by Juliet Archer 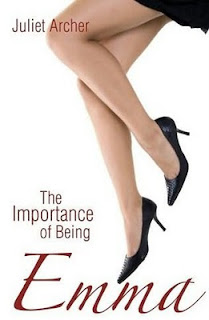 The Importance of Being Emma is the first Austen modernization I have read that I absolutely adored. Having long been reluctant to read modernizations, the first few I have tentatively pursued were enjoyable, but not mind boggling. Juliet Archer has boggled my mind. The thing is, I believe that reading The Importance of Being Emma has taught me something fundamental about Emma that I never knew before: how to hate Emma Woodhouse.

I have never really understood why everyone seems to dislikes Miss Woodhouse so much. Yes, she's egotistical and meddlesome, but I identify with her more than with any of Austen's other heroines and proudly display my badge bearing Gwynth Paltrow's picture from the "Which Austen heroine are you?" quiz (see the sidebar). Yet Ms. Archer's modern portrayal of her made my skin crawl. I need to dwell on this for a moment, though I do not mean to criticize the novel, which I loved. Please do not misunderstand the nature of the following rather snippy complaints. It is just that the opportunity to lend my voice to the ranks of those who detest Emma is too novel to waste.

Emma Woodhouse is the new marketing director at Highbury Foods, her family's business. Fresh from an impressive college career, she sets out to bring the old fashioned company her father runs into the 21st century. Perhaps her cause would be aided if she dressed a bit more professionally. As the book opens, she is dismayed by a magazine article featuring a very leggy image of herself but does not learn from this incident to present herself less sexually. The descriptions of her clothing are remarkable. Stilettos, plunging necklines, and skintight skirts are apparently quite unexceptional office attire. I love what she wears to the company Christmas party:

Stunning dress, white and strapless and hugging her body as though she'd been poured into it. Hair falling in glossy waves around her face. Eyes and lips provocatively defined, as if daring someone to accuse her of wearing too much make-up.

Such an ensemble doesn't exactly correspond to what all the female executives I have ever known are likely to wear at a company function, especially those who work at conservative, family-run businesses. Furthermore, she's caddy, selfish, and, in summation, the kind of woman I wouldn't be adverse to running over with my car. Is this not what most fans feel for Austen's Emma Woodhouse?

So why did I love this book so much while positively loathing the heroine? It has everything to do with Mark Knightley. This too makes me feel at one with many of my fellow Janeites, all adoration for Mr. Knightley while despising his lady love. Ms. Archer's development of his character takes him beyond the staid Regency gentleman we know and love, presenting him as an incredibly passionate, socially conscious, and far from perfect modern man. The book is structured so the point of view switches back and forth between Emma and Mark, allowing us inside his head and revealing the not so very gentlemanly thoughts he has. When reading period JAFF, I have a very hard time with the heroes and heroines being presented sexually, but have found that sexual content does not bother me nearly so much when the stories are transposed to the modern era. Mark Knightley is an extremely sexy and sensual character. I found myself unable to put the book down as I waited for Emma to stop scheming and the perspective to flip back to Mark and his struggle over his feelings for Emma. All the intense emotion we imagine Austen's George Knightley to masterly repress is conveyed in indulgent detail through Mark's voice. For example, note the clarity of his emotions upon meeting the modern Frank Churchill:


I walked into the room and stopped short.


They were on the sofa together, their knees almost touching; he was half turned towards her, his hand on her arm. Her cheeks were flushed and her eyes sparkled. I couldn't see all of his face, but I knew who he was, instantly.


Several seconds passed before Emma noticed me. 'Oh, there you are,' she said, dismissively, and looked straight back at him. 'Flynn, this is Mark Knightley, I'm sure Tom will have mentioned the name.'


He jumped to his feet and tried to win me over with the same engaging grin I'd seen in that photo-shrine on the Westons' sideboard. We shook hands - he wasn't as limp-wristed as I'd have liked - and I schooled my features into a mask of polite indifference; inside, I was wishing him miles away.


So he'd finally shown up in Highbury, after all those false boasts and empty promises. Putting the Westons to great inconvenience, no doubt; I vaguely remembered Emma saying he wasn't expected until the end of the week. And, with impeccable timing, he'd decided to visit Hartfield at a critical moment between Emma and me.


I took a seat opposite them and willed her to look at me. All in vain; it became increasingly obvious that I may as well not be in the room. He was centre stage, the focus of her attention.


I'd only just met him, yet I hated him - more than I'd ever hated anyone in my life.

The book held me totally riveted from beginning to end. A nice touch were the chapter titles, named in honor of the food industry interests of the Woodhouse and Knightley families, each a course in the grand feast Ms. Archer presents for our delectation. Though I will continue to love and defend Austen's Emma Woodhouse, I have to admit that I never thought I would enjoy disliking a version of her so much. It has been a most enlightening experience, and I cannot wait to see if Ms. Archer causes a similar revolution in my persepective of Persuasion, my favorite Austen novel, in her next book in the Jane Austen in the 21st Century series, Persuade Me. You can learn more about the series and read an excerpt on Ms. Archer's website.
Posted by Alexa Adams at 5:56 PM