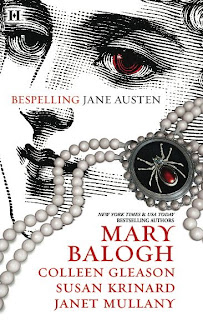 For my last review in honor of Halloween, I turn to an anthology of four romance writers' supernatural interpretations of Jane Austen's stories. Bespelling Jane Austen is an amusing collection with many highlights, but also a few drawbacks. It seems only appropriate to explore each tale in turn.

Almost Persuaded by Mary Balogh opens the book. It is a loose take on the Persuasion story, the characters having different names and slightly different back stories. The supernatural premise focuses on reincarnation, the Anne and Wentworth characters (Jane Everett and Captain Mitford) being soul mates: doomed to fall in love, life after life, and always tragically separated. Special insight into their plight, however, allows them the opportunity to maybe get it right this time. This is a very sweet and romantic story which had me hooked from the first page, but, as frequently happens, I was a bit uncomfortable with the amount and type of sexual content incorporated into a Regency period piece. Some of the choices the characters have to make felt, to me, to be negated by over excited libidos, but I imagine that most people would not find this aspect problematic.

The second story is Northanger Castle by Colleen Gleason, and I think it was probably my favorite in the collection. A Catherine Moreland based character, Caroline Merrill, visits Bath with her mind full of Gothic tales, in particular a vampire novel called "The Venator" about a sect of vampire hunters and their prey, the Tutela. Everywhere she goes she sees people who seem to fit into the profile of the characters in her novels, but it begins to seem that Caro is more than just an imaginative young lady, and that her flights of fancy have some basis in fact. I really enjoyed this story, but I have one HUGE complaint that almost made me throw down the book in annoyance. The story begins with an assembly in the Pump Room. An assembly in the Pump Room? Perhaps a reader with greater knowledge of Bath history will be able to shine some light on this, for as far as I know, such events were never held in this public gathering place.

Story number three is Blood and Prejudice by Susan Krinard, who is the force behind this collection of stories. It's a cute modernization of Pride and Prejudice with a vampiric twist, namely that both Darcy and Wickham (and Lady Catherine) are members of the undead. Though shortened, it largely follows the original storyline, which I found pleasing. I particularly liked that Darcy was still the same Regency gentleman we know and love, though transposed into a modern setting and extremely old.

The final story is by Janet Mullany. Just yesterday, I reviewed Ms. Mullany's Jane and the Damned (read it here), which I highly enjoyed. Unfortunately, Little to Hex Her, a modernization of Emma, incorporating all kinds of supernatural creatures, held little appeal for me. The problem mostly derives from Ms. Mullany's blatant dislike for both Emma and Knightley. In this story, Emma runs a dating agency (almost too appropriate) in Washington D.C. for vampires (Frank Churchill), werewolves (Harriet Smith and Robert Martin), elves (the Eltons), witches (Emma, Knightley, "Missy" Bates, and Jane Fairfax, and naiads (none of our main characters). It could have been amusing, but I just felt all the characterizations were wrong. Emma is completely lacking in confidence, as is Knightley, while "Missy" Bates rambles endlessly without making any sense, unlike Austen's character, who reveals a great deal of extremely pertinent information. I found it an anticlimactic end to the collection.

Overall, there is lots of fun to be had in this book, and it was supremely appropriate holiday reading. Happy Halloween everybody!
Posted by Alexa Adams at 7:32 PM