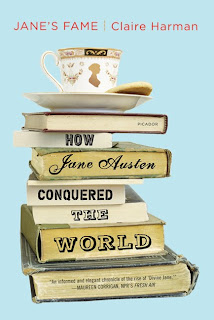 The incredible height of my TBR pile prompted me to postpone reading Jane'e Fame: How Jane Austen Conquered The World when it was first released, but when the kind people at Picador (check them out on Facebook at www.facebook.com/picadorbookclub)offered me a free copy for review, I bumped Claire Harman's exploration of the meteoric rise of Austen's reputation to the top of my priority list. Despite my great appreciation for and love of any free book, I really wish I had broken down and bought a copy in order to read this sooner. I found it absolutely fascinating and far more informative than yet another biography, which is what I had been led to largely expect. While the book does offer much information regarding Austen's life, the focus always remains on her notoriety, particularly how an unmarried lady from Hampshire went from a moderately successful novelist who, after her early death, began to fade into obscurity, into the massively popular cultural phenomenon that she is today. While many of us Janeites are highly familiar with the end of this tale (and I found it highly gratifying to read the names of some of my favorite Austen blogs towards the end of the book), the light Harman sheds on the years that really solidified Austen's renown, from about the middle of the 19th century though the early years of the 20th, was a revelation to me. I highly recommend this absorbing account to anyone with a love for the "Devine Jane".

The information included in the book is far too dense to recount in detail here, so I will instead focus on the aspect of it that I found most remarkable: the massive diversity of those who have found in Austen both solace in times of turmoil and political justification of their causes. The most astounding example of the first is probably the fact that Winston Churchill, when planning the-day operation with Roosevelt and Stalin, suffered from a severe fever which he weathered by reading Pride and Prejudice. Overall, this book offers a wonderful new argument for me to leverage against all those who so frequently claim that Austen is strictly chick-lit. Harman recounts her popularity amongst troops in the trenches during World War I, for whom Austen represented the calm and peace that was so absent from their lives. She was also recommended reading to soldiers recovering from wounds, as her novels were considered therapeutic. This is a far cry from the modern image of bonnet-wearing, cat-loving Janeites who swoon over Colin Firth in a wet shirt (not that there is anything wrong with that), and I loved every detail of  Harman's stereotype busting narrative. I was further mesmerized by Harman's highlighting of the ability political opponents have to leverage Austen in the name of the disparate causes. Suffregettes looked to her as an example of the powerful nature of the feminine mind, while their opponents held up her values as ideals of traditional femininity. The latter argument was further complicated by her popularity amongst anarchists, who saw in her wit an execration of the bourgeois lifestyle. Harman proves over and over again that Austen can be all things to all people. Her novels are open to as large a variety of interpretations of the Bible.

And here is your opportunity to be similarly delighted by your very own free copy of this intriguing book. For those of you who might shy away from the notion of reading non-fiction, let me assure you that Harman is highly readable and accessible to all, not just those with an academic bent. If you love Jane, I find it hard to believe you will not be enthralled by Jane's Fame. For your chance to win simply leave a comment, including your email address, by Wednesday, March 16th. For a second opportunity to win, let me know why you think Austen's novels have such a broad and lasting appeal. Good luck to all who enter. The lucky winner will be the owner of a wonderful celebration of Austen's unprecedented popularity.
Posted by Alexa Adams at 8:00 PM