The Three Weissmanns of Westport by Cathleen Schine 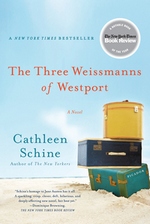 This is going to be a difficult review to articulate. To put it bluntly, while I really enjoyed The Three Weissmanns of Westport as a work of fiction, I have great issues with it as a Sense and Sensibility modernization. While certain characters and plot twists are, undoubtedly, based upon Austen's first published novel, thematically it is worlds away. So while I feel the need to critique Cathleen Schine's departure from Austen, I also have to praise her for writing a novel that touched me deeply.

Here's the premise. Joseph Weissmann, successful businessman, falls in love with an employee, Felicity, and decides to divorce his wife of forty-eight years, Betty. Betty has two daughters from a previous marriage, Annie and Miranda, who were raised by Joe as his own. Annie, the elder sister, has two grown sons who she has raised on her own, her husband having long ago disappeared and subsequently died. Miranda has flit from one love affair to the next while relishing her lifestyle as a literary agent, a career which falls apart in conjunction with her parents divorce. In the scene that most resembles Sense and Sensibility, Joe and Felicity (whose relationship is not shared with the Weissmann ladies) have the conversation that leads to Betty abandoning her Central Park West apartment and relocating to Westport, Connecticut, accompanied by her daughters:

"I will be generous to my wife," Joe told Felicity. "After all, I did spend almost fifty years of my life with the woman." When he said the words "my wife", it made Felicity glare at him. But he didn't notice, for when he said the word "fifty" it made him sad and confused. That was more than half his ife. What was he doing? He was too old to be starting out fresh. But when the word "old" passed through his thoughts, that heavy, gloomy syllable, followed so closely by the word "fresh", his doubt passed and he uttered the word "woman" as if Betty were a rude ticket taker at a tollbooth, a stranger with her unmanicured hand out, and Felicity's glare softened.

"Of course you'll be generous," Felicity said. "You are a generous man. Anything you do will be generous, Joe." She took his hand and kissed it. "And I will help you, Joe," she said. "I'll help you be generous."

"Naturally I'll give her the apartment," Joe said. "It seems only right. We've lived in it all our lives. She's put so mch work into it. It's her baby."

Felicity had seen the apartment. In a magazine. It sparkled and gleamed with a comforting Old World charm. Or so the magazine said. To Felicity, it just looked big and luscious, though the various shades of cream could do with a splash of color, and some of the furniture seemed a bit rickety, antique or no antique. She would like to live in such an apartment. But she said, "Naturally." Then she looked thoughtfully at Joe, who sat on her own sofa in her own living room, a perfectly respectable place in Lincoln Towers that had once had a view of the Hudson River. She stood up and peered out the window at the Trump Towers that now blocked that view. "You bought that place for a song, didn't you?" she asked.

Joe smiled. "We did. We never missed a mortgage payment, either."

"You never missed a mortgage payment," Felicity corrected him.


"Paid it from your salary?"


"Well, who else's salary would there be?" he asked. "Betty never worked a day in her life. Never had to. You know that."


Felicity did know that. She, on the other hand, had worked many days in her life.


"But it was her money that made the down payment," Joe added. He though of himself as a fair man.


"A mere song," Felicity said. "You said so yourself."


Joe considered this. "Yes. Five thousand dollars down. Can you imagine?"


"And now the apartment is worth - what? Three million?"


Felicity was silent, letting the implication sink in.


"That's quite a return on a five-thousand-dollar investment, isn't it?" he said.


"I suppose the upkeep is very high these days."


"She ought to downsize," Joe said. "We should sell the place, and she can take her share and buy something a little more realistic."


"Joe, you really are a generous man," Felicity said. "And self-sacrificing, too."


He looked at her blankly. He knew he was generous and self-sacrificing, but just for a moment he could not quite make out how this act of taking half her proceeds, rather than none, fit that description. Then Felicity said, "But what about the taxes? There will be hardly anything left from the sale after taxes. Poor Betty." She saw it was six o'clock and made him his drink. "It really will be a burden on her, much more than on you. You have so many deductions. She doesn't. Not having a business."


Joe was not a stupid man; but he loved that big, airy apartment Betty had made so comfortable for him, and he loved Felicity. Obviously the apartment would be too much for Betty to handle, he told himself. How could he have been so thoughtless, so insensitive?


"At her age," Felicity murmured again, as if reading his thoughts.


The apartment was far more suitable for him and Felicity. She was young and energetic. He was neithr, but he was so used to the place. Was it fair that he should be thrown out of his own home just to pay good money to the government? It would be very bad judgement. It would bankrupt Betty with taxes. It would be cruel.


And so it was decided. Joe would be generous and keep the apartment.

This vividly invokes that remarkable second chapter of Sense and Sensibility, in which John and Fanny Dashwood discuss how to (or not to) assist Mrs. Dashwood and her daughters, and, to be fair, Felicity is the character in this novel who most resembles her model, consistently reminding readers of the odious Fanny. But this passage also begins to reveal the stark difference between Ms. Schine's story and Austen's. While Fanny's manipulation of John is highly humorous in its duplicity, Felicity's maneuvers are depressing. I am the daughter of divorcees and know far too well how a man, no matter how good his intentions, can be worked upon to take a perspective detrimental to his former family. Maybe this book holds more comedy in it for a reader who does not relate so well to the situation, as the testimonies on the cover praise its hilarity, wit, and satire. I found nothing humorous in this novel. It was moving, yes, but it made me want to cry, not laugh.

Let's return, for the moment, to the ways in which the story mimics Sense and Sensibility. The male cast is fairly consistent. We have an Edward (Felicty's brother, Frederick Barrow), a Willoughby (Kit Maybank), a pretty accurate Colonel Brandon (who goes by his last name, Roberts, alone), and even a Sir John Middleton (Cousin Lou, who owns the bungalow in Westport that the Weissmanns retreat to). We also, out of necessity, have our Lucy Steele, reincarnated as Amber (I don't think she is ever given a last name). Yet our heroines don't exactly match up. Annie is far less resigned than Elinor. Though unmistakably the pragmatic sister, she resents that role, and is more inclined to bicker with Miranda like a child than to try and actively improve her. Miranda might have all the flightiness of Marianne, but not being a teenager, she comes off as rather shallow instead of the deeply feeling character Austen created. Furthermore, the end is nothing like that of Sense and Sensibility. These characters, in their modern guises, do not follow the same course as their Regency counterparts, and the result is far less happy and conclusive.

What made me read this book almost straight through, staying up until the early morning hours in order to finish it, had little to do with Jane Austen. I must admit that a lot of my fascination with the book has to do with the fact that we are dealing with secular, East Coast Jews, who in so many ways resemble my own relatives. Betty, with her optimistic outlook in the face of impending disaster, and her care taking tendencies, reminds me so much of my maternal grandmother, who I lived with for many years and lost in 2004. Since my pregnancy, I have missed her more than ever. Annie and Miranda, too, could almost be my mother and her older sister: one stoically practical, and the other unpredictably emotional, yet irresistibly charming. This book is so real; for me, it is painfully so. I don't know if all Janeites will find Ms. Schine's novel as relateable as I do. In fact, I rather doubt it. But it is a wonderful piece of fiction, capturing the personalities and attitudes of a particular American experience in heartrending detail. This book provides my forth review for the The Sense and Sensibility Bicentenary Challenge, hosted by Austenprose. I was fortunate enough to receive my copy of the book for free, courtesy of the publisher, Picador (follow their book club at http://www.facebook.com/PicadorBookClub), and I will now be passing it along to my mother. I cannot wait to hear her thoughts on it.
Posted by Alexa Adams at 1:25 PM