Bit of a Rant Regarding Mark Twain and Jane Austen 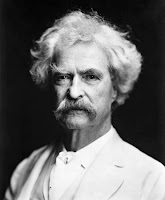 Earlier this week, Vic of Jane Austen Today quoted a Times Online review of Emma 2009 from last October by A.A. Gill, in which this gentleman (not sure that is the correct term) says some rather scathing things about our dear, beloved Jane:

Last week in this newspaper, I read that Mark Twain had said if he knew where Jane Austen was buried, he’d dig her up and beat in her skull with her own femur. My sentiments entirely. The world can be, and indeed should be, split between those for Jane and those for Twain.

Upon reading this, my first thought was, "Who is to say that fans of Mark Twain cannot be fans of Jane Austen?" I greatly enjoy Twain, though I am certainly not obsessed with his work to the degree I am with Austen's. Why must admirers of an author agree with all that said author had to say? Just because Twain, or Charlotte Bronte for that matter, didn't care for Austen, are their tastes to dictate what others enjoy? Certainly not. What would possess a writer to record such an inane proposal?

I am house/dog sitting for my parents this week, providing me with the novel and dubious luxury of not just a television, but digital cable. I woke up this morning to a TMC broadcast of The Adventures of Mark Twain (1944), a film I had never seen before but really enjoyed (once I overcame the extremely dated and offensive characterizations of African-Americans). An extremely moving portrayal of the great humorist, the movie reminded me of the great joy his work imparts to the reader. Known for his wit, cynicism, and hyperbole, I must ask if Twain really despised Austen as much as he professed. He is known, after all, to have read her books repeatedly and, based upon his character, it seems quite believable that he derided Austen in hopes of wrangling his audience.

Let's examine some of what the man had to say about Austen, beginning with this quote Mr. Gill refers to:

I haven't any right to criticise books, and I don't do it except when I hate them. I often want to criticise Jane Austen, but her books madden me so that I can't conceal my frenzy from the reader; and therefore I have to stop every time I begin. Everytime I read 'Pride and Prejudice' I want to dig her up and beat her over the skull with her own shin-bone.

So he wants to criticize Austen, but somehow just can't manage to? I take this as an admission of not actually hating her. Could this mad frenzy be the result of an internal conflict - did he want to hate her but just couldn't quite manage it? Some ten years ago, The Virginia Quarterly Review published a fascinating essay entitled "A Barkeeper Entering the Kingdom of Heaven": Did Mark Twain Really Hate Jane Austen? in which Emily Auerbach makes the argument that Twain was really closeted Austenite by exploring one of these unfinished criticisms of Austen. She says:

Twain obviously enjoyed taking verbal pot shots at "classic" authors. In his famous essay "Fenimore Cooper's Literary Offenses," Twain lambasted Cooper for scoring "114 offenses against literary art out of a possible 115" and committing "a crime against the language" through his stilted diction and sentimentalized characterizations. Perhaps Twain planned a similar essay to pillory the much-praised Jane Austen: an incomplete and unpublished fragment called "Jane Austen" is now housed in the Mark Twain papers at the University of California-Berkeley Library. Why might Twain have become uncomfortable with a vitriolic attack on the "impossible Jane Austin"? Could it be that he found too much common ground?

It is very hard to imagine that Twain would not agree wholeheartedly with Austen's famous statement, from a letter to her niece, Fanny Knight, "Pictures of perfection, as you know, make me sick and wicked ...", but as her letters were not published until well after his death, it is doubtful he had the benefit of wholehearted agreement on this point. Still, is it possible that someone with his wry sense of humor could not see through the morality of Austen, which he professed to despise, and perceive the satire behind it? In fact this seems to be exactly what he is hinting at in this fragment of an essay analyzed by Auerbach:

Whenever I take up "Pride and Prejudice" or "Sense and Sensibility," I feel like a barkeeper entering the Kingdom of Heaven. I mean, I feel as he would probably feel, would almost certainly feel. I am quite sure I know what his sensations would be -- and his private comments. He would be certain to curl his lip, as those ultra-good Presbyterians went filing self-complacently along. ...

It is the images of perfection that irritate him and, as all careful reader's of Austen know, her characters are never so perfect as they might, on the surface, appear.

This is exactly what Gill doesn't get. It pains me to print this, but let's look at what he goes on to say about Emma:

There is nobody to like. There is nobody you could even bear. The eponymous heroine is the most worthlessly loathsome in all fiction. She is manipulative, vain, selfish, arch, shallow, insensitive, capricious and a bully. Her only mitigating feature is a vaunting snobbery so absurd and overweening, so hopelessly eugenic, that it could only be a medical condition. It’s not even that she can claim to be naive or misunderstood or well meaning. She’s a knowing, arrogant little bitch, and we’re supposed to watch and care about her until she reaches a wholly undeserved happy ending and marries that wet bloke who argues with her all the time, as if you hadn’t already guessed. If you hadn’t already guessed, then I’ve just given you a reason to go and do something useful instead. Nobody in this confection of simpering is likeable or forgivable, because none of them has the guts to hack Emma’s leg off and beat her brains out with the bloody stump.

Like the most seasoned Washington politicians, Mr. Gill takes a quote out of context, spins it in an outrageous direction, and produces something completely inconsistent with the original intent. I have to imagine that his description of Emma would have left Mr. Twain aching to read the book.

Jane Austen? Why I go so far as to say that any library is a good library that does not contain a volume by Jane Austen. Even if it contains no other book.

Jane Austen's books, too, are absent from this library. Just that one omission alone would make a fairly good library out of a library that hadn't a book in it.

Yet he obviously read and reread at least Pride and Prejudice and Sense and Sensibility, making it hard to believe these novels were not a part of his personal library. It seems there is far more common ground between the two authors than haters of Austen would like to admit. Like Elizabeth Bennet, it Twain was apt to "find great enjoyment in occasionally professing opinions which in fact [were] not [his] own."

Twain also said:
Posted by Alexa Adams at 8:00 AM