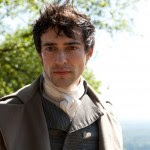 Tonight's the night that the fun begins and one of the things I am most anticipating is the joy of watching the very handsome Blake Ritson (who we remember in the role of Edmund Bertram, a very different clergyman, in the 2007 ITV production of Mansfield Park) play Mr. Elton. In my opinion, his is the outstanding performance of the cast, capturing Mr. Elton in a manner no one else yet has. He's a tricky character to portray, much more difficult than his Pride and Prejudice counterpart, Mr. Collins, who only has to be a buffoon. Mr. Elton is far more complex. At his core, he and Mr. Collins are very much alike: both are clergyman, both think rather too highly of themselves, and both are overly gallant to the ladies. They share the status of rejected suitor and respond with resentment, rushing off to sooth their indignation through marriage to the next available female. But Mr. Elton must first appear perfectly amiable, only slowly revealing his absurdities until, upon marriage, he fully exposes his lack of gentility and ill-nature. Blake Ritson does this phenomenally.

When Emma first describes Mr. Elton, it is in terms that he would heartily agree with ("There is nobody in Highbury who deserves him"), and she goes on to endow him with a multitude of characteristics that later prove almost entirely imaginary:

Mr. Elton's situation was most suitable, quite the gentleman himself, and without low connexions; at the same time, not of any family that could fairly object to the doubtful birth of Harriet. He had a comfortable home for her, and Emma imagined a very sufficient income; for though the vicarage of Highbury was not large, he was known to have some independent property; and she thought very highly of him as a good-humoured, well-meaning, respectable young man, without any deficiency of useful understanding or knowledge of the world.

Very soon, however, the careful reader will observe the inanity of Mr. Elton's compliments, as even Emma begins to notice his shortcomings, though she is still inclined to indulge him for Harriet's sake and is totally blinded to his real purpose:

"This man is almost too gallant to be in love," thought Emma. "I should say so, but that I suppose there may be a hundred different ways of being in love. He is an excellent young man, and will suit Harriet exactly; it will be an 'Exactly so,' as he says himself; but he does sigh and languish, and study for compliments rather more than I could endure as a principal. I come in for a pretty good share as a second. But it is his gratitude on Harriet's account."

It is Mr. John Knightley who first exposes the man for who he really is: a flatterer of the worst kind, as imbecilic as Mr. Collins, "suggesting and arranging such little elegant compliments as may be adapted to ordinary occasions" with the aim of ingratiating himself with the "fairer" sex:

"I never in my life saw a man more intent on being agreeable than Mr. Elton. It is downright labour to him where ladies are concerned. With men he can be rational and unaffected, but when he has ladies to please, every feature works."

Not long after this assessment, Emma is forced to acknowledge the justice of this assessment. Following Mr. Elton's ill-fated proposal, she becomes fully cognizant of his true character, though the depths of his depravity have yet to be revealed:

Certainly she had often, especially of late, thought his manners to herself unnecessarily gallant; but it had passed as his way, as a mere error of judgment, of knowledge, of taste, as one proof among others that he had not always lived in the best society, that with all the gentleness of his address, true elegance was sometimes wanting; but, till this very day, she had never, for an instant, suspected it to mean any thing but grateful respect to her as Harriet's friend.

To Mr. John Knightley was she indebted for her first idea on the subject, for the first start of its possibility. There was no denying that those brothers had penetration. She remembered what Mr. Knightley had once said to her about Mr. Elton, the caution he had given, the conviction he had professed that Mr. Elton would never marry indiscreetly; and blushed to think how much truer a knowledge of his character had been there shewn than any she had reached herself. It was dreadfully mortifying; but Mr. Elton was proving himself, in many respects, the very reverse of what she had meant and believed him; proud, assuming, conceited; very full of his own claims, and little concerned about the feelings of others.

But it is not until he marries his lovely wife (and she really is lovely in this version, to look at I mean, portrayed by Christina Cole, the sexual ambiguous Miss Bingley of Lost in Austen) that Mr. Elton fully exposes his ungentlemanly qualities, establishing the couple as one of the most hateful in all of Austen. The great authoress revels in exposing character through action and it is Mr. Elton's intentional snub of Harriet - indeed, a snub almost as studied as his former compliments - that allows the people of Highbury, as well as the reader, to truly understand him:

"Escape, however, was not his plan. He came to the part of the room where the sitters-by were collected, spoke to some, and walked about in front of them, as if to shew his liberty, and his resolution of maintaining it. He did not omit being sometimes directly before Miss Smith, or speaking to those who were close to her.--Emma saw it. She was not yet dancing; she was working her way up from the bottom, and had therefore leisure to look around, and by only turning her head a little she saw it all. When she was half-way up the set, the whole group were exactly behind her, and she would no longer allow her eyes to watch; but Mr. Elton was so near, that she heard every syllable of a dialogue which just then took place between him and Mrs. Weston; and she perceived that his wife, who was standing immediately above her, was not only listening also, but even encouraging him by significant glances.--The kind-hearted, gentle Mrs. Weston had left her seat to join him and say, "Do not you dance, Mr. Elton?" to which his prompt reply was, "Most readily, Mrs. Weston, if you will dance with me."

"If Mrs. Gilbert wishes to dance," said he, "I shall have great pleasure, I am sure--for, though beginning to feel myself rather an old married man, and that my dancing days are over, it would give me very great pleasure at any time to stand up with an old friend like Mrs. Gilbert."

"Mrs. Gilbert does not mean to dance, but there is a young lady disengaged whom I should be very glad to see dancing--Miss Smith."

Mrs. Weston said no more; and Emma could imagine with what surprize and mortification she must be returning to her seat. This was Mr. Elton! the amiable, obliging, gentle Mr. Elton.--She looked round for a moment; he had joined Mr. Knightley at a little distance, and was arranging himself for settled conversation, while smiles of high glee passed between him and his wife."

Yes that was Mr. Elton, his colors flying high for all to see - completely devoid of good-nature and composed of nothing but the pettiness of those who delight in tormenting easy targets. This is the transformation, or perhaps it is more appropriate to say slide, that Blake Ritson so accurately portrays.

My favorite scene with him will air tonight, 9:00 on PBS. Emma and Harriet are improving themselves by painting landscapes on the grounds at Hartfield when Mr. Elton arrives. He studies Harriet's work over her shoulder before declaring, with great solemnity and an out stretched finger, "That is a very good tree." Just thinking of the absurdity of the moment (increased by the very deficient nature of said tree) leaves me chuckling. Enjoy it everyone!
Posted by Alexa Adams at 6:06 AM