The Pemberley Chronicles: Part One

I am going to do a two part post in response to Postscript from Pemberley, Book Seven in The Pemberley Chronicles series by Rebecca Ann Collins, mostly because I haven't been blogging long enough to have commented on her work before. In my next post I will review her latest book, Postscript from Pemberley, while in this one I will reflect on her previous six books as a body, without revealing any spoilers for those who have not read them.

The series follows the characters of Pride and Prejudice from the time of Elizabeth and Jane Bennet's weddings through the Victorian period. The Darcys, Bingleys, Gardners, and Fitzwilliams all live in close proximity to each other and share values which permanently bind them, namely honor, community service, and a strong bent towards reformist politics. Several characters serve in parliament, resulting in the inclusion of lots of politics, almost undetectable in Austen. It is a bit of a modern leap that Ms. Collins takes, aligning her cast so closely to "radical" reform, but it seems to work as an extrapolation on the virtues of charity and coexistence which Austen promotes.

The books are extremely tasteful - nothing here to make Jane blush. I greatly appreciating the tact with which Ms. Collins handles Austen's beloved characters (her account of their lives is thoroughly sweet) but frankly I sometimes find these books boring. This was particularly true for the first two, The Pemberley Chronicles and The Women of Pemberley. It is very nice and pleasant to follow the characters through their daily lives, as they work to improve their communities and endure both the joys and heartbreaks of parenthood, but it is not always gripping material. Ms. Collins can be a bit repetitious in her prose while much of her dialog is expository and, consequently, sometimes rather dry. Nevertheless, there is comfort to be found in such humdrum activity, especially when the characters at its center are Fitzwilliam and Elizabeth Darcy. As the books progress and the next generation matures, the business of falling in love becomes the focus of the plot and things get more exciting.

I much preferred the third, forth, and fifth books in the series - Netherfield Park Revisted, The Ladies of Longbourn, and Mr. Darcy's Daughter - to the first two. The pace moves faster in these books, the story is more intricate, and the joys and sorrows of life are handle with better balance, making the entire reading experience more pleasant. Perhaps this is why I was so disappointed in Book Six, My Cousin Caroline, which while useful as a recap of the entire series thus far, provides very little in the way of new material. Reading this book put me right back back into the doldrums of the first two books, leaving me rather reluctant to read Book Seven. However, after a slow start, Ms. Collins succeeded in fully engaging my attention in Postscript from Pemberley. I look forward to reflecting on the story tomorrow. 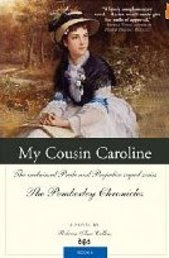 bizarre movie on which I have yet to really reflect. In the course of 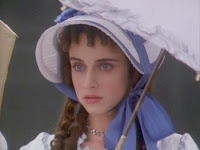 writing this post today, I happened to notice that the woman gracing the cover of My Cousin Caroline kind of looks an awful lot like Katharine Schlesinger as Catherine Morland. What do you think? Is this serendipity or have I finally lost my mind?
Posted by Alexa Adams at 10:56 AM