"The finest child in the world"

So I planned to write another post about Emma today - either about the role of blunders in the story, Mr. Elton, or Harriet Smith - but instead I have some news that I am most anxious to share with all my Janeite friends. I am pregnant with my first child, due in September. Since I found out I have absolutely no concentration for anything other than babies (even Austen is on the back burner) so you'll have to forgive my flightiness until I finally settle back down into a semi-normal routine. Between the book, the house, and now a baby, my cup is truly running over. What can I do but ransack Austen in search of baby references?

My thoughts turn immediately to Mr. and Mrs. Palmer of Sense and Sensibility and that gentleman's unreasonable attitude to his first-born offspring:

"Mr. Palmer maintained the common, but unfatherly opinion among his sex, of all infants being alike; and though she could plainly perceive, at different times, the most striking resemblance between this baby and every one of his relations on both sides, there was no convincing his father of it; no persuading him to believe that it was not exactly like every other baby of the same age; nor could he even be brought to acknowledge the simple proposition of its being the finest child in the world."

I have great hopes that my husband, who is actually more excited than I am, will be far more natural in his praise of our child as the most perfect amongst its kind. He has had some rather troubling opinions of infants in the past, likening them to little, pink ... best not quote him. As I dare not pollute this forum with such an ugly word, let's just say it's thoroughly uncharitable. I hold to my belief, nonetheless, that once he gazes upon his own child his opinion will forever alter. Besides, I always thought Mr. Palmer said such things just to be provoking and really did delight in his baby (an impression enhanced by Hugh Laurie's portrayal of the character in 1995).

A bit back on the topic of the week, Emma provides far more gratifying images of parenthood. The Westons are equally pleased with their child, and I simple adore this depiction of the lady:

Mrs. Weston, with her baby on her knee, indulging in such reflections as these, was one of the happiest women in the world. If any thing could increase her delight, it was perceiving that the baby would soon have outgrown its first set of caps.

Now this is how it should be. I hope to find in motherhood a kind of joy far surpassing all I have previously experienced. In my own home, with my own child (having also long been in the field of taking care of other people's children), I intend to at least equate, if not surpass, her contentment.

Another lovely picture, certainly one more in keeping with my present circumstances, is that of Emma and Knightley as they dote on their little niece. I love this exchange: 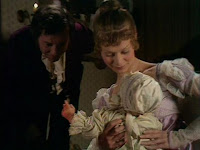 "Tell your aunt, little Emma, that she ought to set you a better example than to be renewing old grievances, and that if she were not wrong before, she is now."

"That's true," she cried—"very true. Little Emma, grow up a better woman than your aunt. Be infinitely cleverer and not half so conceited."

Yes little baby, heed Auntie Emma's words and be better than both she and your mother. This is my earnest hope for the future and I will do my best to make it so.

One last thing - I have no idea what the child will be named if it's a boy, but we long ago decided that we have a girl she will be Eliza, named in honor of two of my favorite characters, Eliza Doolittle and Elizabeth Bennet. And yes, we will call her Lizzy.
Posted by Alexa Adams at 9:54 AM