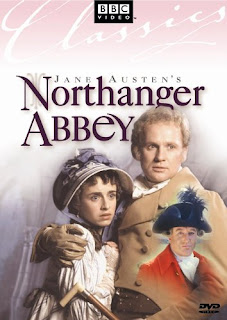 I have watched this film 3 times since I received it at Christmas, never having seen it before, and only now can I, with great timidly, attempt to compose a coherent response to it. The 1986 adaptation of Northanger Abbey is unquestionably the most bizarre of the many films depicting Jane Austen's novels (although Patricia Rozema's Mansfield Park comes in a close second). Despite huge prejudices against this movie, I find I actually kind of like it, though there were a medley of obstacles to overcome before I reached such a sanguine perspective. I cannot comment on it without dwelling on its oddities and fear this review, as a result, might come off as rather negative. It is not my intention to dissuaded anyone from seeing it, as I desperately want to discuss it, so please keep an open mind.

Let me begin by recalling that although Northanger Abbey is Austen's shortest novel, at some 77,000 words, shrinking it into 88 minutes is no small feat. Unlike the other films in my BBC Austen Collection box set, this one makes no attempt to present, almost unadulterated, the entire text of the novel. Not wanting to disappoint either Catherine or its mid-80's viewership, the creators of this film make the Abbey perfectly Gothic, saving us all from the disappointment of modernizations and elegant furnishings by providing all the "painted glass, dirt, and cobwebs" that Catherine's imagination could desire. Of course Udolpho is made much of, complete with "quite horrid" dream sequences of Catherine wrapped in a sacrificial sheet, swooning in the arms of a devilish man who happens to look like General Tilney. The most bizarre of these goes beyond the realm of what I can recall from Radcliffe, showing Mrs. Allen calmly sewing her fingers together. I have no idea what this is supposed to signify, but it reminded me of something out of Un Chien Andalou. The film is set in 1803, allowing some elder members of Bath society to add to the film's creepiness by adhering to their powder and patches, and the whole thing is orchestrated to a truly awful 80's score that feels something like a cross between Top Gun, The Neverending Story, and V.

The strangest scene, the like of which had never before and has never since been seen in Austen cinema, is the one in the Roman Baths. As some of you may know, I studied Classical civilization in college, and had first watched this scene a long time ago, when searching for images of the Baths that gave the town immortalized by Austen it's name. Now, this was quite sometime before my Austen fascination reached it's current, dizzying heights, but I had read Northanger Abbey and Persuasion (the latter several times), and had studied the 19th century in depth enough for this scene to shock me. It set me against ever seeing the movie, a resolution I would surely have stuck to if I hadn't acquired the DVD as part of a collection. Instead of strolling around the Pump Room, as they should be, they are taking a dip in the hot baths - and they are all still wearing their bonnets! On the other hand, the trays of aromatics and orange gowns are period, and apparently the King's Baths were a coed environment (though I believe, by this time period, some others were more private?). Vic of Jane Austen's World did a post about it a few years back, entitled Public Bathing in Bath. The scene is just remarkably weird.

That lecherous man at the end? That, of course, is John Thorpe, one of the highlights of the adaptation, played by Jonathan Coy. He's horrifically creepy, as is Isabella, played by Cassie Stuart. Overall, the casting is pretty well done, though Peter Firth is not my ideal Henry Tilney, though a great actor, nor is Katherine Schlesinger my image of Catherine Moreland (in her defense, she looks much better without a bonnet). The script too, while taking a lot of license, is admirable, keeping in tact most of Mr. Tilney witty repartee, though some of his banter is subscribed to the General (Robert Hardy), who isn't portrayed as sinisterly as he could be. The film really is worth watching, though I thank heaven for the 2007 version, which is far superior. As I can never have too much Austen, it is gratifying to have this campy and mystifying version on hand.
Posted by Alexa Adams at 9:17 AM