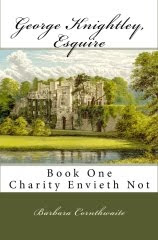 Book One of George Knightley, Esquire is probably the best Emma retelling I have read, my former top runner (not including Joan Austen-Leigh's books about Mrs. Goddard, which stand alone) being Joan Ellen Delman's Lovers' Perjuries: Or, The Clandestine Courtship of Jane Fairfax and Frank Churchill. I would have to reread the latter text to be certain which I prefer, but with the prospect of a whole additional novel from Barbara Cornthwaite on the horizon, I fear Ms. Delman has little chance of regaining her standing. Besides, Mr. Knightley is an infinitely more fascinating subject than either Jane Fairfax or Frank Churchill.
Charity Envieth Not recounts Emma from Mr. Knightley's perspective until the point when Frank Chruchill's initial visit to Highbury comes to an end, shortly before the arrival of the new Mrs. Elton. Ms. Cornthwaite has meticulously dissected the original text, creating Mr. Knightley's entire world - much more expansive than Emma's - out of the tiny hints Austen drops here and there. The accuracy with which she adheres to the novel is impressive, resulting in a beutifully fleshed out George Knightley who is everything devotees could wish him to be: the piercingly perceptive, unvaryingly kind, and totally besotted hero.
I love how Emma shines through Mr. Knightley's eyes. Yes, she is the same old Emma, officious and egotistical, but I challenge those who despise her to not be charmed by Ms. Cornthwaite's depiction. Mr. John Knightley also benefits from this treatment. When viewed as an affectionate father and younger brother he is far easier to love. The letters he and Mr. Knightley exchange provide reliable comic relief throughout the course of the book, such as this one (Madam Duval is the long, white-haired cat foisted upon Mr. Knighltey by his niece):

I wonder if you might spare us a short visit when the quarter sessions have finished with you. We are not far from Newington, after all, and there is a matter on which I should like your advice.

You will come, won't you?

Most Emma adaptations focus on life in Highbury, Austen's most detailed neighborhood. Ms. Cornthwaite, while also providing those comfortable glimpses of the familiar town, necessarily focuses on the residents of Donwell, with it's own parish, attending rector (Dr. Hughes), a new curate, our old friends the Martins, William Larkins, and an array of colorful tenants. The world she depicts is as alive in my mind as Highbury after reading this book. While incorporating the masculine experience and perspective, Ms. Cornwaithe maintains that microscopic feeling of Austen's "two inches of ivory", a place where humdrum human interactions reveal great truths about mankind. I believe that the best Austen inspired literature provides commentary on those original six, blessed novels, enhancing the joy we experience as we read, reread, and then read them yet again. In that sense, Charity Envieth Not is a triumph.
Posted by Alexa Adams at 6:28 AM