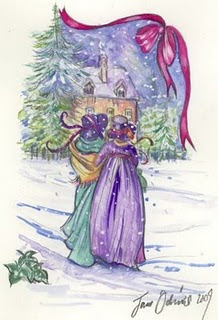 We currently have about 14 inches of snow at 8:30 AM and it's not supposed to stop until 4! Poor Mr. Woodhouse must have been petrified with concern for both the horses and his family on the rare occasions when such a storm came his way. Southern England isn't known for massive snow fall, but only last February Surrey did get a whopping 32 cm (just over a foot). The event inspired Jane Odiwe (author of Lydia Bennet's Story, Willoughby's Return, Effusions of Fancy, and painter of this wintry representation of Jane and Cassandra, of which I am the proud owner) to write this post reflecting back on the year 1795 and how Jane Austen might have employed her time. The winter of 1795 is one of the coldest on record and is the same year in which George IV married Caroline of Brunswick and the Pump Room was opened in Bath by the Duchess of York, Frederica Charlotte of Prussia. It wasn't until 1963 that the weather was more adverse than in that notable year. Mr. Woodhouse must have been overcome with anxiety as diminutive versions of Emma, Isabella, John, and George Knightley frolicked in the snow around Hartfield, very much as the gentlemen are portrayed doing as adults in one of my favorite scenes from the new film.

I have a soft spot in my heart for Austen's curmudgeonly gentlemen, like John Knightly and Mr. Palmer. It's not very charitable or feeling of me, but I sympathize with (and enjoy) John's provocation of his overly worrisome father-in-law in this classic scene:

She had not time to know how Mr. Elton took the reproof, so rapidly did another subject succeed; for Mr. John Knightley now came into the room from examining the weather, and opened on them all with the information of the ground being covered with snow, and of its still snowing fast, with a strong drifting wind; concluding with these words to Mr. Woodhouse:

"This will prove a spirited beginning of your winter engagements, sir. Something new for your coachman and horses to be making their way through a storm of snow."

Poor Mr. Woodhouse was silent from consternation; but every body else had something to say; every body was either surprized or not surprized, and had some question to ask, or some comfort to offer. Mrs. Weston and Emma tried earnestly to cheer him and turn his attention from his son-in-law, who was pursuing his triumph rather unfeelingly.

"I admired your resolution very much, sir," said he, "in venturing out in such weather, for of course you saw there would be snow very soon. Every body must have seen the snow coming on. I admired your spirit; and I dare say we shall get home very well. Another hour or two's snow can hardly make the road impassable; and we are two carriages; if one is blown over in the bleak part of the common field there will be the other at hand. I dare say we shall be all safe at Hartfield before midnight."

I'm off to make hot chocolate and curl up by the fire with my husband. I expect it will be a lovely day.