So a while back I did this to Emma and now I intend to commit the same folly with Mansfield Park. Before I do, however, it is imperative that I rant and rave for a moment. There are three adaptations of this most misunderstood of Jane Austen's novels, only one of which I find satisfying: the 1983 BBC mini-series. The two more recent adaptations, the 1999 Hollywood version, courtesy of the Weinstein brothers, and the 2008 TV version both offend me, in different ways. I believe the latter to be somewhat hampered by budget (not a problem for the Weinsteins), hence no ball room and no trip to Portsmouth. Even a hair dresser was apparently too expensive. Nevertheless, both films have something in common - what I can only describe as a hatred for Fanny Price as Austen created her. I understand that many over the years have maligned this character as dull and priggish but does that give those adapting a masterpiece of literature the right to completely alter the very essence of the main character? I do not think so. Let me state clearly that Fanny Price is a timid young woman, totally unlikely to run, skip, and jump in the hoydenish manner she has been shown doing in film. She also has not a jot of wit. That being said, I will (largely) refrain from further explicit commentary and let my selections speak for themselves.

Fanny Price - As indicated by my above comments, I have to pick Sylvestra Le Touzel from the 1983 version as she is the only actress who actually plays the character I know as Fanny Price. She captures all the appropriate timidity, affection, and sensibility of the character. If I think she looks better before she is supposed to have blossomed (that emergence being indicated in this film by the addition of curls to her coiffure) it is a moot point.

Edmund Bertram - I have a bias towards Blake Ritson, who I consider the indisputable shinning star of the 2008 version. He is certainly the most handsome actor to have played Edmund, which doesn't hurt, plus he's incredibly talented. His portrayal of Edmund has all the appropriate seriousness while also capturing the character's innate naivety. 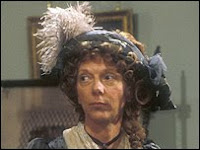 Aunt Norris - I love Anna Massey in this role from the '83 version! She busily bustles about, totally unaware of her own meanness, exactly as Austen intended. It certainly helps that almost all of her dialogue from the book is in tact. Aunt Norris is a character I find rather fascinating - Austen makes her both despicable and rather hilarious simultaneously, no small feat. Ms. Massey is the only portrayer of the role who has captured both aspects of her personality. 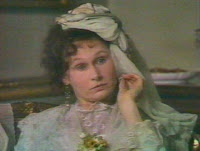 Lady Bertram - Angela Pleasence ('83 again) is the ultimate Lady Bertram. I laugh rather hysterically every time I watch her in the role. The voice she uses, so insipidly languid, is perfection. She is my favorite character in this film, achieving what the best film portrayals do: adding depth to a character while remaining true to its essence.

mas Bertram - I have to choose Bernard Hepton of the '83 adaptation because, as is the case with Fanny, his is the only portrayal of the real Sir Thomas. He is a very complex character and, while he largely fails as a patriarch, he is the most effective father in all of Austen. Yes, he can be tyrannical, but he always acts with the best interest of his family at heart. Mr. Hepton, wonderful actor that he is, aptly captures Sir Thomas' struggle. I cannot control myself - I must add that Harold Pinter's portrayal in '99 leaves me sick with fury.

Mary Crawford - This was a hard call as all the portrayals of Mary are rather good, each in their own way, but again I go back to the '83 version. Jackie Smith-Wood is the only actress who manages to capture the softer aspects of the role. Mary might have a multitude of worldly faults but she truly cares for Fanny and Edmund. The more recent adaptations only convey her mercenary side, to the neglect of her affections. The result is that she comes off too cold, lacking in the playfulness inherent to the character. I wish I could find a picture that did justice to Ms. Smith-Wood but this is the best I could do. 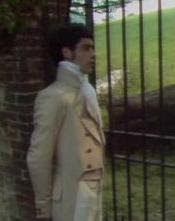 Henry Crawford - This is not turning into much of a mashup as I again select a member of the '83 cast. Robert Burbage is an excellent Henry, smug and charming, with none of the unseemly intensity of emotion that marks the later portrayals. He has a sparkle to his eyes that aptly bespeaks the mischief he pursues. Also, for those who have been paying attention, I like both my Austen heroes and villains alike to be dark and Mr. Burbage is the only Henry to fulfill that qualification. What else can I do? Another terrible picture, unfortunately.

Maria Bertram - I really enjoyed Michelle Ryan as Maria in the '08 adaptation (in spite of the silly, lank locks that hang by her ears throughout the majority of the film). She brings an appropriate sauciness to the role and has all the beauty one could want in a Maria Bertram. That's a rather devilish hat she's wearing, isn't it? Her riding habit is my favorite costume in the film. 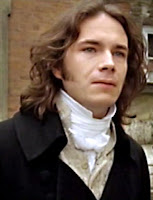 Tom Bertram - OK. So I really just like his last name, but James D'Arcy ('08) does do an admirable job as Tom. The kind of hyperactivity he portrays is very appropriate to the character. He is every inch the young man about town.

Julia Bertram - I love Justine Waddell ('99) in this role, mostly because I think she's a wonderful actress and is much better to look at than my two other options (she's actually probably too pretty, out shinning Victoria Hamilton as Maria). Her portrayal of Laura Fairlie in the '97 version of The Woman in White still haunts me.

Mr. Rushworth - This is another difficult call, all the actors who have portrayed Mr. Rushworth having done so admirably, but I have to say Hugh Bonneville of the 1999 adaptation. Honestly, he just looks the most like Mr. Rushworth to me: fat, happy, and silly.

Mr. Yates - I cannot find a picture of him but Allan Hendrick in the 1983 version is the ultimate Mr. Yates. He doesn't have a lot of competition as the character is not included in the '08 version and Charles Edwards portrayal is merely that of an amiable young man, totally lacking in the affectation and pomposity required of Mr. Yates. I do wish I had a picture; his hair is marvelous.

n there is a shortage of options here as William is totally absent from the '99 plot. I choose Joseph Morgan ('08) because he both looks the part and has all the animation of character with which Austen endowed him. I love it when he reenacts a naval battle at the dinner table using a spoon and a salt shaker.

Susan Price - Only two options again. This time it was

the '08 version that deemed a character expendable (apparently Fanny can only have one sibling at a time). Though I really enjoyed Eryl Maynard's portrayal of this character in the '83 version, so exactly like the book, I choose Sophia Myles because she thoroughly charmed me and I choose to indulge my prejudices. She lacks the brashness the character has when we first meet her so I must think of her more as the lady Susan becomes rather than as a product of the Price household.

Mrs. Price - Lindsay Duncan played both Lady Bertram and Mrs. Price in the '99 adaptation but I can only find pictures of her in the former role. As Mrs. Price she is so raw, weary, and weather beaten that it's quite heart breaking. Perhaps she is too aware of the miseries of her situation, when compared with the book, but that does not prevent her from being the image I see whenever I reread it, a true sign of a successful portrayal.

Mr. Price - I like David Buck in the 1983 version. He is utterly disgusting.

I shall end by embedding a clip from the 1983 version, encompassing the dinner party at the Grants (who I chose not to include in my lineup as this is the only version that includes them) and the scenes in which both Mary and Edmund give Fanny chains for her cross. I provide it mostly so you can get a better view of the Crawfords than those miserable pictures above, but it also has most of my favorites in action.