I'm slowly plowing my way through A Truth Universally Acknowledged: 33 Writers on Why We Read Jane Austen, reading an essay or two a week. Of course, it begs the question: why do I read Jane Austen? There are too many reasons to enumerate here (I'm squeezing this post in between the constant travel and parties that have filled my life for the last week -I know, poor me) but the most obvious is that Austen's heroine's have, since I was a teenager, provided me with both a model for my own behavior and a code of morality to follow. Austen has taught me much but there is still so much more to learn. If I ever want to even approach the perfection that is Anne Elliot, I must continue to take these strictures to heart. Therefore, my New Year's resolution is to internalize a lesson from each of Jane Austen's heroines. I like to keep me resolutions attainable, so these are small goals whose significance is certainly lost on anyone who isn't a Austenite. Some will diet and exercise while others quit smoking or drinking, but in 2010 I plan on ... 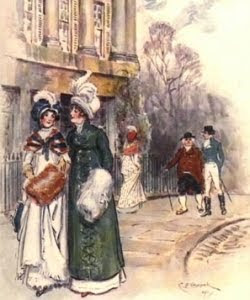 ys judging and acting in future with the greatest good sense," and when that fails, "to forgive [myself] and be happier than ever ... ", just like Catherine Moreland.

... being a bit more like the Dashwood sisters, though my "feelings [are] strong" I shall endeavor "to govern them." To that end, "I have laid down my plan, and if I am capable of adhering to it--my feelings shall be governed and my temper improved. They shall no longer worry others, nor torture myself."

... invoking Elizabeth Bennet's spirit when "frightened at the will of others." I shall hope that my "courage always rises with every attempt to intimidate me."

... cultivating Fanny Price's sense of the sublime and hopes for mankind: "When I look out on such a night as this, I feel as if there could be neither wickedness nor sorrow in the world; and there certainly would be less of both if the sublimity of Nature were more attended to, and people were carried more out of themselves by contemplating such a scene."

... being thoroughly contrite and intent on setting things right when I do err, like Emma Woodhouse: "She had been often remiss, her conscience told her so; remiss, perhaps, more in thought than fact; scornful, ungracious. But it should be so no more."

... fully appreciating and relishing both "the happiness of such misery, or the misery of such happiness" that life brings my way, just like my dearest Anne Elliot.

Happy New Year everybody! May all your hopes and desires for the future come to fruition.

(The above illustration, borrowed from Mollands Circulating Library, is by C.E. Brock and depicts Catherine Moreland and Isabella Tilney strolling the streets of Bath)