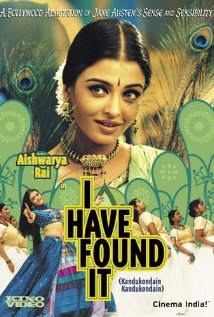 I watched Kandukondain Kandukondain (I Have Found It) for the Sense and Sensibility Bicentenary Challenge hosted by Laurel Ann of Austenprose. As soon as I signed up for the challenge, I knew this film would be the subject of one of my posts, as I am something of a Bollywood freak. Though this movie is technically a Tamil musical, it still follows the same conventions of Bollywood and features many faces that will be familiar to fans of Indian cinema, most prominently the gorgeous Aishwarya Rai, also known to Austenites as the actress who played the Elizabeth Bennet character (Lalita Bakshi) in 2004's Bride and Prejudice. Though this latter film is far more famous, I must say I far preferred Kandoukondain Kondukondain. While the storyline has been altered to reflect both modern times and a rather different culture, the main characters are largely true to their original counterparts, resulting in a charmingly successful adaptation.

Our story begins in a manner that fundamentally grounds the film in Tamil culture. A helicopter descends before a magnificent waterfall, paratroopers leaping down to make their way through a dense woods. These are members of the IPKF (Indian Peace Keeping Force), who were deployed by India into Sri Lanka during the late 80's in an attempt to being an end to the Sri Lankan Civil War. The troops are lead by Major Bala (played by Mammootty, also a megastar in India), who is our Colonel Brandon character. When lingering by a school, one student opens fire upon the military, and as Bala runs back through the forest he triggers a land mind, resulting in the loss of his leg. It is this event that shapes his character, as opposed to the history of Eliza that molds Colonel Brandon's.

We then cut to a film set in an urban environment, where our Edward Ferrars character, the far more socially adept Manohar (Ajith), is working in pursuit of his dream of being a director, much to the chagrin of his wealthy parents who sent him to the United States for college, where he studied to be an engineer. In the course of filming Manohar is asked to request permission to shoot in a village temple from the royal family of the area, and this is when we finally meet our Dashwoods. Mahalakshmi (Srividya) has returned to her father's home after a rupture, the result of her marrying against his wishes, to care for him, bringing her three daughters along. The cause of the patriarch's illness is not defined, but his incapacitated state suggest he has had a stroke. For months he has been muttering the same word over and over again (will) without being able to convey his desires to his daughter and granddaughters, who think he has lost his senses. Meanwhile, Mahalakshmi is determined to marry her eldest daughter, Sowmya (Tabu), who certainly resembles Eleanor in her pragmatism and emotional conservativeness, but differs from Austen's character in being tainted by the label "unlucky", the result of the death of her former fiance. The family is expecting a potential groom (one of many) when Manohar arrives seeking permission to film in the temple and confuse his purpose, much to Sowmya's embarrassment, but this mix up results in Manohar's pursuit of Sowmya, to whom he is instantly attracted.

While Sowmya is dutifully fulfilling her obligations as daughter, which includes running the college the family owns, the next sister, Meenakshi (Aishwarya's role), is dreaming of being swept off her feet by a romantic hero. Her passions are music and poetry, and it is when he hears her sing that Bala, a successful local florist, becomes infatuated with her. Urging her to pursue more serious music, Meenakshi mocks him for drunkenness (which seems to be his means of dealing with his crippled state and disillusionment). Bala soon reforms and begins to court her, developing a friendship with the family, but when Srikanth (Abbas), a high profile investment banker, comes to the town, he sweeps Meenakshi off her feet (just like Willoughby, literally), bonding with her over their mutual love of poetry. It is easy to see where his downfall will lie, as he is promising outlandish returns on investments made by the village's poor and innocent population, but otherwise I would say this is the character whose storyline most resembles that of his original counterpart. Bala, unlike Colonel Brandon, shows his love for Meenakshi by doing all he can to facilitate her happiness, even when this means trying to unite her with a man he knows is less worthy of her affections.

It is only halfway through the movie that the family patriarch finally dies, right upon the youngest daughter having finally discovered for what he has been asking. The tragedy of this circumstance reveals itself upon the will being read, which leaves everything to Mahalakshmi's brother, who has not been to visit their father in ten years. Completely dominated by his wife, the couple take control of the family holdings, quickly reducing their sister and nieces to the role of servants in their former home. I must say that, if you can believe it possible, this rendition of Fanny Dashwood is even more odious than Austen's. The ladies have nothing, but pride drives them from their ancestral home to take up residence in the capital city of Madras (now Chennai), where they are forced into a transient lifestyle while the girls try to find work. Eventually, Bala and Manohar locate the family, allowing our romances to progress, while Sowmya's ability to find a job as a software developer and Meenakshi's success as a musician and singer stabilize the family finances. There is far more to the plot than revealed here, but I have gone into this level of detail specifically to demonstrate the ways in which the film stays true to the plot of Sense and Sensibility while altering it to fit both the modern and Indian context.

Now if you do not care for the conventions of Bollywood, this movie is unlikely to gratify you. Yes, the characters burst into spontaneous, massively choreographed musical numbers, often taking place in completely disjointed settings (why are we suddenly in Egypt or a European castle?), and our heroines first appear dramatically emerging from the water. However, the stereotypical use of rain to increase dramatic tension is very similar to the manner in which that same atmospheric phenomenon was used by both Ang Lee and John Alexander when they directed the 1995 and 2008 adaptations, respectively. I highly recommend that those who hold prejudices against such tactics try to overcome them by embracing the camp, for there is so much to enjoy this adorable film, let alone in the Indian film industry as a whole, but if such attempts are beyond you, I suppose you will just have to resign yourself to missing out. I, for one, imagine I will be watching and rewatching this movie for years to come, and I must send a big thank you to Laurel Ann for hosting a challenge that brought this overlooked gem to my attention.
Posted by Alexa Adams at 11:41 AM