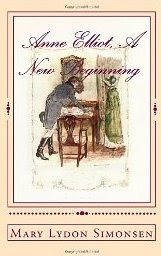 I just finished reading one of the most unusual pieces of JAFF  I have yet encountered. I am not sure if I should call it a "What if?" (if so, it's the first I have read that is not Pride and Prejudice based) or a mash up, though there is not a monster in sight. Stylistically, it reminds me more of Forrest Gump than anything else. I plan to spend this dreary morning exploring my feelings about Mary Lydon Simonsen's newest book, Anne Elliot, A New Beginning, and her two main characters, an almost unrecognizable woman who responds to the moniker Flash and her romantic interest, Rick.

This is really wild new terrain on which we trod. Instead of the brow beaten and melancholy Anne Elliot of the beginning of Persuasion, Ms. Simonsen's Anne has found empowerment in long distance running, effectively inventing the art of jogging. When Captain Wentworth comes to Kellynch he finds a bold and confident Anne, allowing their lost love to reemerge far faster than in the original story. I must assume that this story was at least in part inspired by the 2007 film adaptation of Persuasion, largely due to all this running about, but there are other similarities as well. The following scene reminds me of the film (which falls right before the five minute point in this YouTube episode):


"Miss Elliot, I am sure you are tired," cried Mrs. Croft. "Do let us have the pleasure of taking you home. Here there is room for three, and if we were all like you, I believe we might sit four."

"No, thank you, Mrs. Croft. I appreciate the offer, but my preference is to walk," but then Mrs. Croft whispered something to her brother. With everyone insisting that she was too tired to continue, and before she could say no, Fredrick, with his arms around her waist, had lifted Anne onto a board that ran behind the seat of the gig. But she was no longer a docile creature who would do as she was told or allow others to make decisions for her, and so she hopped back off the gig, right into Fredrick's arms, and found herself looking at his chest. All she could manage to say was, "You have very large buttons."

"Yes, so I have been told," he answered, surprised to find his arms around Anne's waist.

Anne looked into his blue eyes and said, "I think we are talking about different things. I was referring to the buttons on your coat."


Yes, this is a very different Anne, and yes, there is a lot more sexual innuendo in this book than I am typically comfortable with, but in never really gets far beyond innuendo. I am far more uncomfortable with Anne using the word "turd" as a descriptive for Mr. Elliot than the slightly adult content. However, as Ms. Simonsen is deliberately working without concern for historical accuracy or adherence to the original storyline, I got over my distaste for some of her language. She takes Anne and Fredrick, rechristened by a charming street urchin named Swoosh as Flash and Rick, into a world of her own invention, where her love of history, so very apparent in her previous book, Searching for Pemberley, playfully manifests itself in a Mary Musgrove transformed into (and working with) Florence Nightingale and Clara Barton, an Elizabeth Elliot who invents Avon cosmetics (and sells them in her fine drawing rooms), a sketch artist named Jimmy Whistler who likes to draw his mother, and a Mr. John Bradford Goode (Johnny B. Goode), Samaritan. Once I accepted the "Gumpian" nature of the novel, I was easily able to settle back and enjoy the ride.


This is a fun story, but not one for Austen purists. As mentioned before, it has the feeling of a mash up, with all its farcical attributes, and if you have no tolerance for mummies and werewolves, you probably wont enjoy "Flash" skulking through the worsts parts of Bath, tracking Mr. Elliot in his nefarious pursuits, much either. But if you are amongst those who can relax your pride and prejudices enough to entertain whimsy, I recommend this book. It's a radically unusual tale.
Posted by Alexa Adams at 10:35 AM

Labels: Persuasion, Reviews, What If?