Sense and Sensibility and Sea Monsters by Ben H. Winters 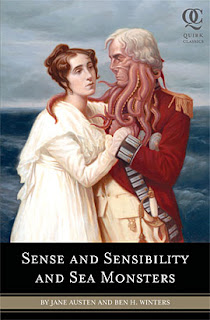 Let me begin by explaining why I have not, in my title for this post, credited this book as a collaborative effort, as is done on the cover. You see, while the basic framework for the tale is undoubtedly that of Jane Austen's original book, the story is so fundamentally altered, and in such a thoroughly bizarre manner, that we really must, in all fairness, put the entire burden of both its triumphs and tribulations solely upon Ben H. Winters. And yes, that was an admission that the book does have moments of triumph, despite the  extreme skepticism with which I approached it. I first began to read Sense and Sensibility and Sea Monsters two years ago, when it first came out, but only one chapter in I abandoned it in fury, a thing I have only done three times in my life - that's how horrible I thought the book was going to be. I decided to pick it up again in fulfillment of the Sense and Sensibility Bicentenary Challenge, hosted by Austenprose, as it was already sitting on my bookshelf. Maybe this is just the happy pregnancy hormones speaking, but I was pleasantly surprised. The same elements that filled me with disgust when I first tried to read the book were no less present than before, but this time around I was able to discern in the book a satiric critique of Austen that I can't help but acknowledge as justified, even though it does rankle.

The fact of the matter is that Jane Austen strictly wrote about the tranquil lives of genteel men and women, never allowing the turbulence of the outside world to interfere with their relatively peaceful existences, despite the fact that she lived in a time of massive social upheaval. This is actually one of the essential elements that makes me love her novels so much: they are an excellent means of escapism. In Mr. Winters' tale, on the other hand, the hostility of the world is ever present. All the characters live in a constant state of imminent peril, such as to render the relatively mundane concerns of society, particularly love and romance, trivial in comparison. Is this a fair critique of Austen? Absolutely, but to take such an approach while billing the novel as a collaborative project (surely for no better reason than that having Austen's name on the cover is publishing gold) seems rather misleading to me.

Instead of the honorable world of Austen's gentlemen and ladies, Mr. Winters takes the reader to a savage place - part fantasy, part horror, and part steampunk - in which humans are engaged in a constant struggle for survival against the creatures of the water. Now one might think that, if all the fish in the sea were determined upon inflicting bodily harm, that people would avoid interacting with them at all costs, but in Mr. Winters' world such logic does not prevail. The humans in this story spend far more time in nautical pursuits than their original counterparts, tempting fate at every turn by embarking on underwater explorations, pleasure boat rides, and even going so far as replacing the role that the metropolis of London played at the time with an underwater city, entrapped in a great glass dome, called Sub-Marine Station Beta. This disregard for life and limb extends to the manner in which servants are treated, who are far more like slaves than freemen, and an unquenchable blood lust, expressed through bloody public spectacles resembling those in which the ancient Romans so greedily indulged. While I am able to rationalize such elements as a deliberate reversal of Austen's portrayal of the world, what I have a far harder time coping with is the insensibility Mr. Winters' attributes to her (I suppose I should say his) characters. Both Marianne and Eleanor constantly ignore blatant signs of danger, consumed instead in their own petty cares, an attribute of obliviousness totally at odds with the characteristics that define not only these two, but all of Austen's heroines. Of course, no one in Austen, regardless of their moral fiber, would pick their teeth, let alone with a cuttlefish bone just hacked up out of one's throat, in the manner that Marianne is here portrayed doing, but perhaps such qualms ignore the spirit of Mr. Winters' project.

Overall, I must admit to thinking this a far better book than the more profitable Pride and Prejudice and Zombies, as Mr. Winters, unlike Seth Grahame-Smith, at least displays a creditable knowledge of Austen original work, his commentary displaying a legitimate engagement in the text rather than a random insertion of desperate elements for the sole purpose of marketing power. However, even disregarding the aspects of the novel that are inherently repulsive to me, it would have been much more successful if some of the newly inserted side plots came to some sort of fruition in the end. Elements such as the Devonshire Fang-Beast and Margaret Dashwood's strange story (neither of which I will elaborate upon, so as to avoid spoilers) prove to have little purpose in the end. Yet as far as monster mashups are concerned, this could have been far worse than it was, and I do not regret, as I feared I would, reading it. A rather lukewarm recommendation, I know, but remarkably generous considering my previous feelings on the genre.
Posted by Alexa Adams at 3:50 PM