Northanger Abbey and Angels and Dragons by Vera Nazarian 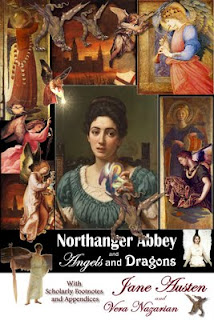 I have expressed my reservations about the infusion of monsters into Austen's novels frequently enough to not feel compelled to restate those feelings now, so as I begin this review I will only reiterate the notion that any writer who approaches rewriting her books with love and respect for the original texts, as opposed to merely capitalizing on her fame, is, from my perspective, worthy of reading. Vera Nazarian certainly falls into this latter category, and having hugely enjoyed Mansfield Park and Mummies (read my review here), I have been anxiously awaiting my opportunity to read the second book in her series, The Collected Supernatural Jane Austen: Northanger Abbey and Angels and Dragons. Before sharing my thoughts on this novel, let me just say how very much it pleases me that Ms. Nazarian began her series with Austen's two most overlooked and under-appreciated novels, especially as they rank amongst my most favorite (when forced to choose) of her works. In a world where publishers are reluctant to market anything but JAFF premised upon Pride and Prejudice, for the very legitimate reason that nothing else sells so well, this was a gutsy move, and one I highly appreciate.

Following both the plot and text of Northanger Abbey almost verbatim, Ms. Nazarian makes this story her own by endowing Catherine Morland with a unique gift: the ability to see and talk to the guardian angels that  protect all humans in this book. While done in an extremely tongue-in-cheek manner, this narrative works, in the same way that endowing Fanny Price with the ability to perceive the presence of zombies and vampires worked in the previous book, because all of Austen's heroines are already portrayed as superior beings, able to perceive truths that lesser persons are oblivious to, although in Catherine's case this attribute is conveyed through a haze of naivety. Also very organic is Ms. Nazarian's development of John and Isabella Thorpe, whose questionable personalities are taken to an extreme by casting them as demonic. My only qualms about this characterization lies in Catherine's continued tolerance of these two, a fact which adherence to the original story requires, despite her knowledge of their true natures. Nevertheless, I absolutely relished the depiction of John Thorpe, whom I consider the most odious of all Austen's men, and I cannot help but wonder if his portrayal was influenced by the 1986 movie (read my review here), in which he was so masterfully played by Jonathan Coy:


Preceeding him came the heat of a furnace. But even before it struck full force, Catherine saw him, and muttered, "Oh dear, he is an ogre!"


It was indeed the frightful truth. Seen with clarity of supernatural vision that Catherine now enjoyed, he was a large bulky gentleman with limbs like trunks and a torso like a barrel of old port. His skin was coarse and elephantine, swarthier than his sister's, and with an even more greenish tint - a few degrees more and his complexion might have rivaled a toad. His hair stuck out like dry straw from underneath the edges of his otherwise stylish hat, and had a suspiciously fire-tinged ruddy tint, as though it's been through a curtain of flames. And when he grinned, his teeth were simply enormous -


Oh dear, Catherine thought. Indeed, she was so struck by the oddity before her that she forgot to be properly frightened or alarmed, and unabashedly stared in amazement (a behavior which later she comprehended to be hardly appropriate on her part; no wonder the gentleman may have gotten certain ideas).

Ms. Nazarian also cleverly plays upon Austen's use of the Gothic, particularly the Udolpho references in the story, imparting Catheirne's obsession to the entire population of Bath, all of whom become consumed with the notion of deciphering a "Udolpho Code", which is said to lead to hidden treasure. This results in the gentleman of the town abandoning their walking sticks for shovels, and the newest fashions for ladies including bells and tubers. The entire notion is so absurd that it is impossible to imagine Austen not heartily approving, though I do wish this aspect of the storyline, for all its ridiculousness, ended in a more satisfactory manner than it does.

I do have a few other complaints, which cannot be addressed without including spoilers, so those who wish to preserve all the surprises this narrative has to offer for their own perusal of it, please skip this paragraph. Rather than all of Catherine's imaginative meanderings, upon her arrival at Northanger, proving perfectly normal and mundane, her explorations into the suspicious furnishings of her room, in particular, result in the unleashing of a demonic force which reappears on several occasion, demanding the Whore of Babylon (which proves to be a reference to Isabella). Eventually, the horde is expelled merely by Catherine's command that it do so, and I found the entire episode not only unnecessary to the plot, but also an entirely pointless distraction. I wish it had proven more meaningful. My other issue is with the role of the dragons, which prove to be not only General Tilney (a characterization which I feel was successful), but also Henry Tilney, whose true nature is only revealed once his love for Catherine drives him to passionately defend his "treasure". While such extreme attachment on his part is touching, I'm not sure it is in keeping with the thoroughly rational and staid hero Austen created.

I hate to dwell on such minor irritations when reviewing a book I truly enjoyed, but I cannot help but express my increased annoyance with the footnotes, as one book of snide references to sexual innuendos was enough for me. The fact that more of the same are sure to be found throughout the remainder of the series makes me groan. I also feel the need to take this opportunity to beg Ms. Nazarian, should she favor this review with her attention, to please abandon her rather constant use of the word "verily". While the word may cast a sense of dated language upon her manuscript, it surely can be employed with moderation, and I cannot help but note that Austen only twice, as far as I am able to discern, uses the word in any of her writings: once in Northanger Abbey, in which it is spoken by Isabella, and again in Pride and Prejudice, when George Wickham uses it. Perhaps if the word is so very favored by our modern authoress, she could at least reserve its use to only despicable characters?

Over all, this is an amusing and farcical take on Northanger Abbey, which I have no hesitation in recommending to fans of both the novel and of monster mashups. I do think that Ms. Nazarian's adaptation of Mansfield Park was more successful than this second book, but I attribute that to the fact that Mansfield, which is a less perfected novel, intrinsically allows for more manipulation of its plot. Northanger, which Austen had years and years to rewrite and edit, does not provide the same opportunities. This makes me highly curious to see how Ms. Nazarian will apply her approach to the remaining novels, which I will most certainly read (I'm rather anxious to learn if we will ever the origin and purpose of the Brighton Duck). Next on the list is Pride and Platypus: Mr. Darcy's Dreadful Secret, a title which has me nervously praying that my favorite hero does not prove to be a hybrid of a duck, a beaver, and an otter, as such a portrayal would put a massive damper on my romantic fantasies. I think I am most anticipating the final book in the series, Lady Susan, Succubus, which just seems too perfect not to be a roaring success.
Posted by Alexa Adams at 1:01 PM