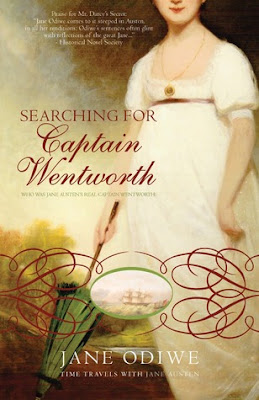 Despite the appearance of grey cloud, briefly overhead, the sun decided to challenge the densest vapor, evaporating all into whipped confections like floating meringues in the cobalt sky. The sisters returned. Jane's mood was bright, but if anything she was overly talkative and I wasn't completely convinced that she was as happy as she appeared. She sat down a little way in front, looking out a the view across Bath. I watched Cassandra reach inside her basket producing a pocket sketchbook, a pencil, a bottle of water and a small box of paints.

"Do not move, Jane," she called. "I shall picture you for posterity ... a portrait of unwearied contemplation."

"Just as long as you do not paint my face!" Jane called, turning her back to us, arranging her dress and striking a pose.

"I would not dare ... I know how much you dislike sitting for me. No, I shall not ask you to turn. I shall capture the folds in the back of your gown instead and paint your elegant bonnet."

With swift strokes of her pencil, Jane's figure was outlined. Dressed in turquoise blue with her bonnet strings undone, she sat upon the grass, one neat little foot poking out from under her gown, her hand resting upon her knee. Only the most tantalizing curve of her cheek was displayed so it was impossible to guess her expression or sense any emotion. After a few minutes, she protested at sitting still for so long. Ignoring her sister's request to sit for five minutes longer, she was on her feet in a second and came over to my side. Ever restless, Jane held out her hand to me.


I begin my review of Jane Odiwe's newest book, Searching for Captain Wentworth, with this quote from the beginning of Chapter 23 because it is the kind of stuff to make a Janeite weep. I was already entranced by this novel when I came to this scene, having stayed up way past the time I ought to have already been asleep in order to read it, but this moment overwhelmed me. To be a fly on the wall when Cassandra Austen painted her enigmatic portrait of Jane! This book is as close as one will ever get.

I've read fictionalized accounts of Jane Austen before, but usually I find such portrayals disappointing. The best I came across prior to this book was Janet Mullaney's Jane and the Damned, but as Austen is a vampire in that novel, though a very engaging one, all sense of the historical figure gets submerged by fantasy. Not so here. Ms. Odiwe has brought my favorite writer to life in a way I have seen no one else accomplish, endowing her with nervous energy, a rebellious tongue, and infinite charm. She is just as I like to imagine her, and it was an absolute joy to spend three hundred pages in her presence.

But this book isn't about Jane Austen. The main character, Sophie Elliot, is a modern woman and an aspiring writer. After a bad breakup, she seeks refuge in the house her family has owned in Bath since the 18th century. Quickly discovering how she can pass from her own time into the Regency Era, she inhabits the body of her ancestor and namesake, who just so happens to live next door to the Austen family. At first her experiences terrify her, but Sophie finds the desire to return to the past irresistible, and even when she tries to remain in one time or the next, happenstance intervenes to send her hurtling back. One of the biggest lures of the 19th century is her growing friendship with Charles Austen, who is visiting his family while on leave from the Navy, but how can she allow herself to fall in love with a man who has been dead for two hundred years?


As I have read other novels featuring Austen as a character, so have I read Austenesque books involving time travel. Ms. Odiwe's stab at the genre is as good as the best of these, beautifully depicting a historical time and place. My husband and I (both confirmed food geeks) have an ongoing discussion regarding the value of sauces, and so I particularly got a kick out of this passage:


I chanced to look up from the plate of food that I wasn't entirely certain about. Everything had arrived on the table at once. Arranged symmetrically on white gilded Wedgewood with a laurel motif, the mahogany table gleamed under candlelight, bearing plates of salmon with bulging, glassy eyes, jellied tongue glistening with gelatine, Florentine rabbits complete with heads and furry ears, oily mackerel that stared at me balefully from my plate. Was it my imagination or was the green gooseberry preserve that covered it doing more to disguise the fact that the fish had not seen the sea for quite some time?

Though the food be rancid, there is so much to relish in this book! Truly something for everyone, Searching for Captain Wentworth beautifully combines echoes of Persuasion with paranormal fantasy and history. Reality interposes as well. Ms. Odiwe has been championing The Rice Portrait of Jane Austen (featured on the book's cover) on her blog for some time now, and the painting itself plays a role in her plot. Her depiction of Jane Austen also seems inspired by it, as in this first description of the authoress: "The girl whose broad smile reached her twinkling eyes had round rosy cheeks like a painted doll and unruly chestnut curls dancing under the brim of her bonnet in the breeze." Ms. Odiwe's novels usually feature artwork and very appropriately, as Ms. Odiwe is the artist behind some of the most touching Austen inspired renderings I have seen. One of my favorites is her version of Cassnadra's portrait, in which she shows Jane glancing back at us. This book is like that painting, provinding a tantalizing glimpse of Jane. Paintings like Cassandra's watercolor and The Rice Portrait provide a foundation for Ms. Odiwe's story, bridging the distance between past and present.


If you have not had the pleasure of reading Ms. Odiwe's books, let me recommend them to you with enthusiasm. I have loved each of her novels, from Lydia Bennet's Story (one of the first Austenesque books I ever read, which is why I never reviewed it on this blog, even though it is amongst my favorites) and Willoughby's Return (which was one of my first reviews) to Mr. Darcy's Secret. Each is an entirely different undertaking from the next, and  is a remarkable addition to an already diverse body of work. I cannot wait to find out in what manner Ms. Odiwe will delight us next!
Posted by Alexa Adams at 2:45 PM