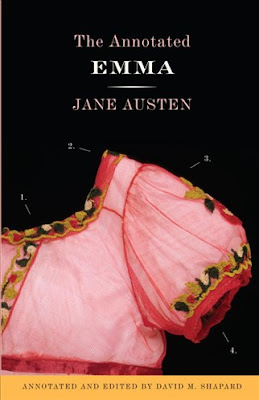 I have raved about the excellence of David M. Shapard's annotated edition of Austen novels before. Though I was not yet writing when I read The Annotated Pride & Prejudice, I have often acknowledged that it was the inspiration for First Impressions: A Tale of Less Pride and Prejudice. Without his meticulous chronology, I would never have been able to write the story in the manner I did. A new revised and expanded edition comes out on November 13th (order it here), and I will certainly be purchasing it and reviewing it on this blog. Even if my first edition weren't ragged and worn, a condition testament to the adoration of its reader, I would still be buying this invaluable book. I believe it the most useful tool any writer of Pride & Prejudice fan fiction can own.

When he next released The Annotated Persuasion, followed by The Annotated Sense & Sensibility, I wrote rather extensively on how his annotations illuminate the text in manners informative to even the most devoted Janeite, using as an example his notes on Nurse Rooke in my review of Persuasion, and his translation of The Cult of Sensibility for a modern audience in my review of Sense & Sensibility. Now tackling The Annotated Emma, I wish to focus less on the value of his annotations in and of themselves, instead dwelling on the fabulous reading experience he provides. In doing so, I am treating Mr. Shapard a bit more like a fiction author in his own right, rather than just an expert. This is a little strange, I know, but I hope the end result will be its own defense.

I've read Emma countless times, but of all Jane Austen's novels, it is probably the one I turn to the least. That does not mean I do not adore it, but Miss Woodhouse and I have some personal issues. I think most would agree that a quintessential aspect of any Austen novel is a heroine confronting either a previously unknown or unacceptable part of herself, forcing her to conquer her feelings or behavior. As Mr. Shapard puts it in his note on a line in Volume III Chapter XI, "To understand, thoroughly understand her own heart, was the first endeavor.":


The need for self-knowledge is a crucial part of a Jane Austen heroine. At a critical moment, when she realizes her past errors ... Elizabeth Bennet, declares, "Till this moment, I never knew myself." In Emma's case her willingness immediately before this to acknowledge that she has deceived herself even more than others have deceived her - in other words, that she has been the principal author of her trouble - represents an important step in the direction of better self-knowledge.

As readers of Austen, we join her heroines on their journeys of self-discovery, and from each one I have learned something about how I want to conduct myself. This lesson is hardest for me with Emma, because she is the heroine I most resemble. As unpleasant as it is for Miss Woodhouse to confront her own failings, so is reading her story rather upsetting to me. It all hits too close to home, recalling miserable moments in my own life, and those regrets that plague me most persistently. Perhaps it is for this reason that I often defend Miss Woodhouse to those who revile her as meddling, conceited, and, let's face the nasty word, "a bitch", for I am defending my own character, which I maintain is mostly good in spite my flaws, just like Emma. Yet if her story pains me, it also gives me hope, as Mr. Shapard writes at the novel's climax: " ... even at this moment of supreme personal importance and happiness, Emma thinks of another person, an act that, like her encouraging Mr. Knightley to speak out of concern for him, shows her morally deserving of happiness." So you see, we're not all bad.

Yet this reading of Emma, with Mr. Shapard's observation by my side, caused me to come to a harrowing conclusion. Miss Woodhouse resembles another creature in Austen, and one who is found to be not so deserving: Miss Mary Crawford of Mansfield Park. Just as I have often defended Emma, so have I spoken out on behalf of poor Fanny Price, a creature who really does not deserve the censure she receives from so many. Countless times have I argued that the Crawfords, both Mary and Henry, are unworthy the sympathy they receive from readers. I have called them selfish, morally bankrupt, and vile, but as I read the end of Emma, the following line made me pause: "Oh! I always deserve the best treatment, because I never put up with any other". Mr. Shapard does not comment on the statement itself, and though I have often pondered this quote before (it may even be scrolling by in the sidebar right now), for some reason, my mind attuned to new notions by the careful reading his annotations demand, this time I was instantly struck by the affinity between this statement and Mary's, "Selfishness must always be forgiven, you know, because there is no hope of a cure." The two might even be paraphrases of the same notion, the essence being that bad behavior deserves some sort of reward. Oh Mr. Shapard! "Till this moment, I never knew myself," indeed!

From here a onslaught of resemblances pummeled my brain. Does not Frank Churchill occupy somewhat the same role in Emma as Henry Crawford does in Mansfield Park, and is not Emma's relationship to Mr. Churchill similar to that shared between the brother and sister? If nothing else, the indulgence and leniency Emma shows towards Mr. Churchill is certainly like Mary's to her brother, so very repugnant as it is to Edmund Bertram. Does not Mary's willingness to manipulate, as displayed when she uses subterfuge to give Fanny the necklace from Henry, echo Emma's presumption in arranging Harriet Smith's destiny? If anything, Emma is the far more privileged character, and therefore more blameworthy in having failed to imbibed the strong morality by which she is surrounded. My "mind had never been in such perturbation"!

"To youth and natural cheerfulness like Emma's, though under temporary gloom at night, the return of day will hardly fail to bring return of spirits." And so the morning brought better thoughts. Emma, and perhaps Mary, too, has many good qualities. As already established,  she is "morally deserving of happiness." Perhaps I have been too hash a critic of Miss Crawford, who though not blessed with redemption, certainly learns her lesson (Austen writes of "the better taste she had acquired at Mansfield, whose character and manners could authorise a hope of the domestic happiness she had there learned to estimate..."). What solution to my predicament is there but to resolve, as I have after previous readings of Emma, to guard against future bouts of "blunders" and "folly", to be mindful of my own arrogance, and to learn from the mistakes of the past. Are not such lessons precisely why I read Austen?

A similarity Mr. Shapard does dwell upon is that between Emma and Mrs. Elton. Uh oh! I dare not open that can of worms. Enough about me, for though this has been a rather fitting demonstration of my selfishness, I feel something must be said of the book's structure. Emma had the most drawn out ending of Austen's novels, six chapters following the climax of the story. I always find myself sort of checking out after [SPOILER ALERT] Emma and Mr. Knightley declare their love for each other. W still have to sit through an entire chapter of Frank Churchill's letter to Mrs. Weston, and yet another on Mr. Knightley's reaction to it. It is all very well done, of course, but knowing how everything concludes, I admit to finding it all a bit boring. Even Harriet's engagement to Mr. Martin, though satisfying in its tidiness, is pretty anti-climatic after the intense emotion of the proposal scene. As I read this edition, I wondered if Mr. Shapard did not agree. Though he never says anything of the sort, it is only in the last few chapters of this novel that I have ever perceived any inconsistency in his meticulousness. Suddenly there are illustrations inserted that do not really seem relevant to the text. In one image depicting "clothing from a slightly earlier period" a thing he always notes, there is no mention of the discrepancy, which struck me as odd. I may be over analyzing his analysis, but it seems confirmation of my long standing belief that the end of the novel is rather superfluous in the reread. I also wonder if Mr. Shapard did not find this book a bit harder to annotate than his others, as there are so many opportunities for spoilers. He studiously alerts the first time reader before prematurely exposing any essential detail of the plot, using the same format which I borrowed above, but the very nature of Emma as a proto-detective novel renders his task awkward.

I think it notable that The Annotated Emma, just like The Annotated Pride & Prejudice, has inspired me to write a "What-if?" retelling of the story. Again, Mr. Shapard chronology was absolutely necessary to the undertaking. In case you have not yet heard, I intend to post Emma & Elton: Something Truly Horrid on this blog. It will be in eight parts, beginning on October 24th and ending n Halloween. As you may gather from the title, my affinity for Miss Woodhouse does not preclude me from punishing her a little (actually, it may be my main impetus). Obviously, and despite any lessons in self-awareness I may have recently received, I am not above interrupting a perfectly sincere review to engage in shameless self-promotion. Enogh of my nonesens! Let me conclude by emphasizing once more how excellent a service Mr. Shapard has done the world by giving us these beautiful annotated editions. I eagerly anticipate more from him, though in regards to an annotated Mansfield Park, perhaps I should rather be feeling dread. No matter what conflicting emotions such a volume might cause me, be sure I will read and review it here.
Posted by Alexa Adams at 1:03 PM