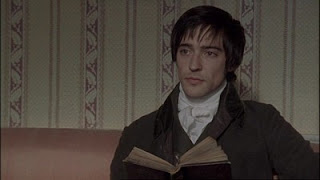 Edmund's friendship never failed her: his leaving Eton for Oxford made no change in his kind dispositions, and only afforded more frequent opportunities of proving them. Without any display of doing more than the rest, or any fear of doing too much, he was always true to her interests, and considerate of her feelings, trying to make her good qualities understood, and to conquer the diffidence which prevented their being more apparent; giving her advice, consolation, and encouragement.

Hobbies: Reading, star gazing, listening to the harp, and moralizing.

Most charming quality: General goodness, combined with a perception for the best in others.

Prospects: For a second son, quite good. He has the living of Thornton Lacy, worth 700 pounds, to which he adds Mansfield, worth "less than a thousand a year". 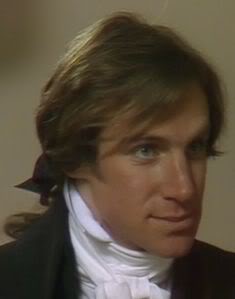 "My dear little cousin," said he, with all the gentleness of an excellent nature, "what can be the matter?"


"Poor Fanny! not allowed to cheat herself as she wishes!"

"If you are against me, I ought to distrust myself..."

"She does not think evil, but she speaks it, speaks it in playfulness; and though I know it to be playfulness, it grieves me to the soul."


"You are the only being upon earth to whom I should say what I have said; but you have always known my opinion of her; you can bear me witness, Fanny, that I have never been blinded."

"I was playing the fool with my eyes open."

Observant followers might notice that I avoided the descriptive "favorite", per my habit, when listing quotations taken from Mr. Bertram. It is not that he doesn't say anything I particularly enjoy (though that is very nearly true), but I have opted to take this character sketch in a slightly different direction. In the name of disclosure, let me loudly proclaim that Edmund is my least favorite of all Austen's heroes, and while I find him agonizingly frustrating, it does not mean that I do not care for him at all. My challenge here is to articulate what it is that redeems him, and I hope the quotes selected above will assist me in that effort.

Above all else, Edmund is worthy of his hero status because of his ability to properly value Fanny.  It is upon this fact that Austen builds her entire premise for his being worthy of the heroine's affection. Though Austen illustrates his good qualities throughout the book, it is mostly through acts of kindness to his cousin. As I looked at his statements in the text, I was struck by the fact that pretty much all  of the quotes I preferred were addressed to Fanny. Granted, the story is from her perspective, but he says a great deal in conversation with others (actually speaking far more than most of Austen's heroes). So I began with those quotations which seemed to best illustrate his relationship to Fanny, for here lies his foundation. 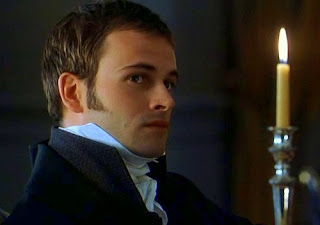 Part of the problem with Edmund is that outside of his appreciation for and care of Fanny, we are asked to pretty much take it for granted that he is a superior man. Austen always demands that we look to a character's behavior when sketching them, so it is particularly notable that Edmund never does anything even remotely astounding to illustrate his worth. In fact, in his biggest moment of moral dilemma, regarding the play, he proves himself inferior. He also fails to discern what is lacking in the Crawfords and his sisters, almost willfully assuming everyone is as innocent as he. He proves a terrible judge of character in almost every instance but in regards to Fanny. Even when he acknowledges misgivings about Mary Crawford, he remains stubborn in his blindness. The pain he inflicts on Fanny by dismissing her scruples when she tries to give him warning is insulting to her good sense, let alone that he suppresses internally. The bulk of the quotes I selected speak to his lack of self-knowledge.

Interesting that in Mansfield Park, while Austen usually subjects all her heroes and heroines to some sort of journey towards self-discovery, we meet a Fanny Price already fully self-aware. It instead becomes Edmund's burden (shared with his father) to illustrate the all importance of knowing thyself, and I'm not sure he succeeds. He says when recounting his last leave of Mary:


I only said in reply, that from my heart I wished her well, and earnestly hoped that she might soon learn to think more justly, and not owe the most valuable knowledge we could any of us acquire, the knowledge of ourselves and of our duty, to the lessons of affliction, and immediately left the room.

This is just like him - to make declarative statements and offer advice without applying any of it to himself. How ironic that such recommendation of self-discovery comes from this most obtuse gentleman! In the same speech he argues with Fanny over Mary's cruelty, as if his opinion on the subject can still can be considered credible. Further, he is so oblivious that he actually considers that speaking of Mr. Crawford might pain Fanny, as if she ever had the slightest attachment to him and wasn't the one to mistrust him from the very first! I have no patience for him at all. I will conclude by repeating the notion that Edmund is only worthy because Fanny finds him so. In her judgement, certainly, we can have faith.