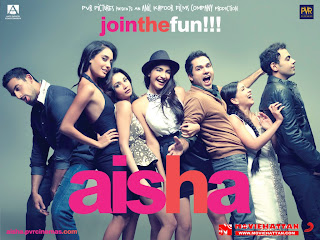 I've been wanting to watch this movie ever since it came out, but as its release corresponded with my pregnancy(ies), I never got to it. Some may recall that I have a thing for Bollywood. It's a passion I discussed in my review of Kandukondain Kandukondain (I Have Found It), a fabulous adaptation of Sense and Sensibility. While Aisha is not as satisfying a film, it is a pretty faithful representation of Emma. The gorgeous Sonam Kapoor plays Aisha, the younger daughter of a wealthy and benevolent father (M.K. Raina - no mention of mom made it into the subtitles). Her older sister is married to the guy who grew up next door, and with his brother Arjun (Abhay Deol), she has an antagonistic and brotherly relationship. The movie begins with the marriage of her aunt, the maternal figure in her life, to the groom of Aisha's choice. Not only did our heroine make the match, she also planned the wedding, and now intends to pursue non-profit event planning as an occupation. We never see this benevolent entrepreneurial endeavor develop anywhere beyond a few sign designs and a determined effort to find a husband for her countrified and awkward cousin, Shefali (Amrita Puri).

Aisha has time for lots of projects. We see her draw, cook, garden, volunteer at an animal shelter, and plot her friends' futures, but mostly she goes shopping. The influence of Clueless can be felt in both Aisha's character and the addition of a best friend to our ensemble, Pinky (Ira Bose), who I really liked despite inconsistent character development. She is one of the only deviations from the structure of Austen's novel, as well as from what I am accustomed to seeing in Indian movies. She's quirky, outspoken, sexually daring, has an edgy fashion sense: much more of a Hollywood party girl than a Bollywood siren.

Everyone else in this cast is immediately identifiable with their Austen counterpart. We are only missing Mrs. Elton and Miss Bates. Perhaps if they were represented, more of the comedy would be preserved. As a Janeite, it's still a lot of fun to see Austen's story modernized and set in a new environment, but I'm not sure the movie would hold a lot of interest for anyone else, and I still have my complaints (I always do - critique is in my DNA). Like Cher of Clueless, Aisha is far more shallow than Emma Woodhouse. I can buy that as a valid interpretation, but not Aisha taking advantage of her father, upsetting his equilibrium with enormous credit card bills and threats of sexual promiscuity. Miss Woodhouse would be appalled, her devotion and solicitude for her father being one of her defining characteristics. Also, her maneuvering to bring together Shefali and the Mr. Elton character (Cyrus Sahukar) involves far more than a broken shoelace, thrusting her supposed friend into a totally compromising situation. I'm not sure the full implications of her actions will be perceived by a non-Indian audience. The film is very Western in both its morality and appearance, and it is almost completely devoid of the elaborate dance scenes for which Bollywood is most known. Nevertheless, the music is very well done. I wish I was better able to speak to how this film fits into a broader evolution in Indian film making, but my interest is far too dilettantish to even dare to try. 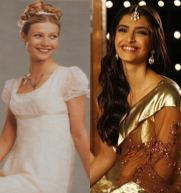 I cannot conclude this post without mentioning the physical resemblance between Sonam Kapoor to Gwyneth Paltrow, or that Abhey Deol looks not dissimilar from Jeremy Northam. No idea if this was a conscious decision, but it is clear that the film makers were influenced by not just Austen, but also those who previously adapted Emma for the screen. As previously indicated, this film will hold the happy interest of a Janeite, but it does nothing to add to our understanding or conception of the novel upon which it is based. Still Aisha is like an old friend, and there is comfort to be found in the familiar.