I have a cover for First Impresions! I'm so excited and would love to share it but, as I still need to pay for the rights to the pictures, I will have to be patient. The process of designing a book cover and interior has totally changed the way I think of books. I have always been uptight about page layout, paper quality, and typeset but I never before broke down all those elements and thought about how they were constructed. My main interest has always been the words on the page (which, of course, it still is) and as a result I have often ignored the details that have caused me to prefer one publication to another. With these thoughts in mind, I present for your gratification my favorite cover designs (not necessarily my favorite editions, which are almost always Norton Critical) for each of Austen's novels.

Note: Deidre Gilbert has a wonderful essay entitled "From Cover to Cover: Packaging Jane Austen from Egerton to Kindle" that was published in the Winter 2008 edition of Persuasions. Follow this link to jasna.org to learn more about the history of Jane Austen cover designs.

I don't actually own this Everyman's Library edition (hardback) of Northanger Abbey and have been unable to determine where the artwork came from but the naivety of Catherine Moreland is well represented by the young lady pictured. This might be what she looked like when she first arrived in bath, before updating her wardrobe with Mrs. Allen

I love the cover of The Modern Library Classics edition of Sense and Sensibility. While I'm not crazy about the repetition of the main image behind the title field the picture is so prefect it overrides that complaint. This is exactly how I picture Elinor and Marianne (probably influenced by Kate Winslet's portrayal of the latter). The picture is entitled The McEven Sisters and was painted by the American portraitist Thomas Sully. 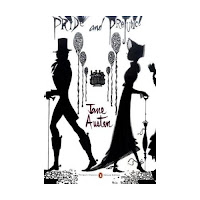 This Penguin Classics Deluxe Edition of Pride and Prejudice designed by Ruben Toledo is on my wish list. I love the use of period silhouettes (just like the beautiful opening credits for the BBC's new Emma) and the wonderful tension between the two figures, nicely capturing the dynamic between Elizabeth and Darcy. It sort of reminds me of Aubrey Beardsley, whose work I adore.

The Arcturus Paperback Classic cover of Mansfield Park appeals to me for a number of reasons. The approaching storminess of the sky seems to invoke the more troubling content of this novel. In regards to the stylized trees, I can almost hear Fanny exclaiming, "The evergreen!-How beautiful, how welcome, how wonderful the evergreen!-When one thinks of it, how astonishing the variety of nature!" The picture used is entitled The Manor House and is attributed to an unnamed artist of the English School. 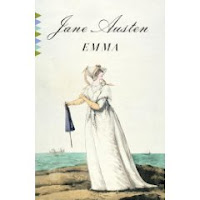 I don't exactly love this cover but as I can't find an Emma with a cover I do love I thought I might as well throw out the Vintage Classics's version. I am generally drawn to their Austen covers, all of which are done in this same style, reminiscent of period watercolors (like the one Cassandra did of Jane from behind). You can see all the covers in this series at the Adventures in Reading blog. 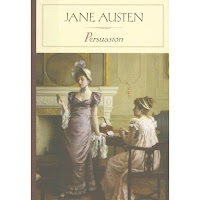 I really adore the cover of this Barnes & Nobel Classic Series edition of Persuasion. Again, I don't own the book and haven't been able to learn where the artwork came form but the standing lady seems to me a perfect Elizabeth Elliot, in all her haughtiness, while the seated figure could easily be the long-suffering Anne. I can't say I am as fond of the back of the book, which I could access online. The blurb is the first paragraph of the introduction by Susan Ostrov Weisser in which she says that "Persuasion has often been seen as the thinking reader's Pride and Prejudice." Can this be true? Despite the fact that Persuasion is my favorite Austen novel, I find this sentiment rather offensive. The entire intro is available on the Google Books preview for this edition. While Ms. Weisser makes a wonderful argument for the complexity of Persuasion, I believe the intricacies she highlights are found in all of Austen's work, not just her "autumnal" novel.
Posted by Alexa Adams at 10:44 AM