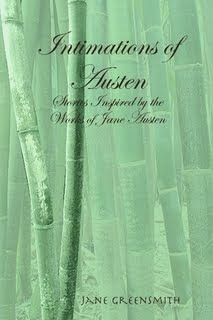 Earlier this week I read this wonderful collection of short stories entitled Intimations of Austen by Jane Greensmith. I really enjoyed these surprisingly modern "backstories, sequels, and what-ifs", all of which play with the basic assumptions we make about Austen, the best in a manner which adds new dimensions to the way we analyze the complete body of Austen's work. My two favorite stories were Three Sisters, which provides a new perspective on Mansfield Park and Persuasion (and which hits on a point raised in the first class I ever took on Austen, much to my delight), and Heaven Can Wait, which imagines an entire love affair out of Mrs. Bennet's mention at Netherfield that Jane Bennet once was courted by a man who "wrote some verses on her, and very pretty they were."

I must admit that some of these tales made me cringe a bit, largely because they were premised upon ideas that made me uncomfortable. For example, I was frustrated with Ms. Greensmith's portrayal of a rather incompetent Fanny Price (now Bertram) in Bird of Paradise as I believe her to have largely run Mansfield, especially at the end of the book, rendering Thornton Lacey an easy house for her to manage. Similarly, while I was absolutely enthralled with the concept behind All I do, a "What If?" story of Elizabeth and Darcy that has them just finding each other in middle age, I couldn't reconcile myself to the absence of decorum between the characters, especially as we're now talking about a Victorian Darcy and Elizabeth who should be even more socially inhibited than their youthful selves. Cringing aside, these stories caused me to think deeply about the characters in ways I hadn't previously. My petty complaints should really be ignored; the entire book is thoroughly worthwhile.

This is a literary collection. The stories are written in a manner that at first seems shockingly stark but that is just because the modern language and prose style is in such huge contrast to Austen's writing and the conventions usually adapted in Austen fan fiction. The prose are simple and poetic, not at all something that could have been written before the 20th century. I would love to go through this book, story by story, and write an essay on each one but that would ruin them for those who have yet to read the book. Instead I will urge anyone with a passion for Austen to bump this book to the top of their reading lists so they can relish Ms. Greensmith's unique rethinking of these beloved stories as soon as possible. Maybe sometime down the road I'll pull the stories apart in detail. They are just begging for close analysis.
Posted by Alexa Adams at 9:32 AM