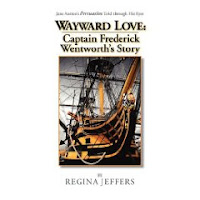 I read Wayward Love: Captain Wentworth's Story last weekend and have waited to blog about it until I could finish rereading Darcy's Passions by this same author. The fact of the matter is that I have now read four books by Regina Jeffers and, for the most part, I have greatly enjoyed them. So in this post I not only want to review her newest book but also think a bit about her career publishing Austen fan fiction.

Ms. Jeffers' first book, Darcy's Passions: Fitzwilliam Darcy's Story, was written in response to a challenge from one of her students while she was teaching Pride & Prejudice. Though the concept has been done several times before, this book is one of my favorite versions. I love her take on Darcy. As she explains in the Preface:

Most believe George Wickham to be the villain in this classic tale, but I am of the persuasion Darcy is both villain and hero - disdainful pride to benevolent rescue. Yet, I also do not believe that anyone changes completely; Darcy's transformation must be based in all his previous experiences. The disagreeable social facade and the potential lover lie within the same man. This is the tale one finds in Darcy's Passions.

Being amongst those who are guilty of thinking far too well of Fitzwillaim Darcy, this perspective of Darc

y as "the bad guy" is both refreshing and perfectly in keeping with the original story. I only wish she had ended the book with their marriage instead of pressing on. This is largely because I did not at all enjoy the second volume Ms. Jeffers wrote, Darcy's Dreams: A Sequel to the Fitzwilliam Darcy Story, the plot of which is set up at the end of the first book. Now it's not that this book is bad, it's just that its subject is so distressing to me I hate to even think about it. After all the emotional turmoil Elizabeth and Darcy go through to reach the happily married state, Ms. Jeffers sends Darcy off to have an accident in which he looses his recent memory and cannot fathom what on earth would have possessed him to marry Elizabeth Bennet. It's so upsetting. Here's that "villain" from the

Meryton Assembly back in full force. I honestly found this book traumatizing which, I happily will admit, it would not have been was it poorly executed. Still, poor Elizabeth!

Darcy's Passions was first released in October of 2008 followed by Darcy's Dreams that June by Xlibris, a self-publishing company. They were then rereleased as Darcy's Passions: Pride and Prejudice Retold Through His Eyes in February of 2009 and Darcy's Temptations: A Sequel to Jane Austen'

s Pride and Prejudice in September of 2009 by Ulysses Press, a traditional publisher. The particularly strange thing about this is that both editions are still available. If you go to Ms. Jeffers' website you will be linked to the Xlibris site for purchase. I don't know much about Ulysses but it's very interesting that they would option a book without demanding full publication rights.

This is not the case for Vampire Darcy's Desire: A Pride and Prejudice Adaptation, which was released directly through Ulyssses Press in Oct

ober 2009 and so is not available for sale via Ms. Jeffers' website. This is by far my favorite of the monster takes on Austen. You can read my pseudo review in an earlier post, Jane Austen and the Gothic.

This brings us to the subject at hand. Wayward Love: Captain Fredrick Wentworth's Story, released by Xlibris in April 2009, is a wonderful retelling of Persuasion. The story begins a few months after Anne and Fredrick's marriage when they are on ship, the British Navy having been recalled following Napoleon having escape from Elba. Captain Wentworth is injured and, as he recuperates, he relives his courtship with Anne in his dreams. The story then follows them back to land where they begin to establish their married lives. Unlike the other books I have read of this nature, Captain Wentworth's Diary by Amanda Grange an 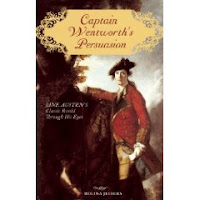 d the Fredrick Wentworth, Captain series, None But You (which, by the way, is phenomenal) and For You Alone by Susan Kaye, Wayward Love shows us what Anne and Fredrick's life might have been like after marriage, in the same manner as so many of the Pride & Prejudice sequels. I would love to see Ms. Jeffers write another volume, continuing the tale where she left off (as long as Captain Wentworth doesn't bump his head and develop amnesia that is).

This same book under a new title, Captain Wentworth's Persuasion: Jane Austen's Classic Retold Through His Eyes, is due out from Ulysses in March 2010. I'm seriously thinking about sending my manuscript to Ulysses and seeing if I can't cut a similar deal.
Posted by Alexa Adams at 9:37 AM