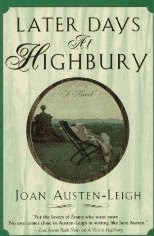 I just read this absolutely delightful epistolary novel by real life descendant of Jane Austen and co-founder of JASNA, Joan Austen-Leigh. Later Days at Highbury might be out of print - I have yet to confirm this and it does seem to be available direct form Barnes & Noble, though not at Amazon (where I was able to purchase a cheap used copy). The book is primarily the correspondence between Mrs. Goddard and a saucy younger sister in London, Mrs. Charlotte Pinkney, who has a tongue worthy of Elizabeth Bennet or Marianne Dashwood. There are occasional letters by secondary characters (including those exchanged between Mrs. Elton and her sister, Mrs. Suckling). The year is 1817 and great changes have come to Highbury since the end of Emma. We learn about the different fates of familiar characters but the story mostly focuses on the new players Ms. Austen-Leigh has introduced to the society.

I do not want to give away the details of this story, much preferring to urge others to read it themselves, but will disclose that there is a strong abolitionist narrative in the tale in order that I may wonder out loud if this might be a direct response to criticism of Mansfield Park (the author takes great pride in her heritage and Austen's legacy, as made evident in this pleasant article, My Aunt, Jane Austen, published in Persuasions #11, 1989). Instead of elaborating on the plot, I want to discuss the prose. Ms. Austen-Leigh has a voice distinct from that of her inimitable aunt but shares her ability to capture the simple truths of human existence. This struck me in a particularly personal way in Letter 46, in which Mrs. Pinkney explains to her husband something I have long struggled to express to mine:

Mr. Pinkney remarks that it is quite amazing the degree of pleasure a female appears to derive from the prospect of a new gown. I try to explain to him that there is more to it than the mere gown, itself. It has something to do with being a woman, a desire to have other people regard one with approval. He asks if I suppose that a stranger seeing me for the first time would discern any difference between my wearing a new gown or an old one. I tell him that a new gown gives a woman a presence, a radiance, an éclat. Because she knows she is looking her best she is affable and amiable, which indeed can be observed by everyone. This would not be the case, I assure him, if she were feeling inferior or dejected for being seen yet again in the same old dress.

Now this isn't exactly deep philosophy, but it is an interaction that has occurred millions of times between couples across the ages and it made me laugh aloud - not with the cackle Austen's wit inspires, just a polite chortle. As in those of Jane Austen, this book captures the simple pleasures and follies of human kind, wrapped in the comfort of early 19th century gentility and, in this case, the familiar pleasantries of Highbury. There is a deficit of Emma sequels available and this is one of the best. It is a safe recommendation for even the fiercest Austen purist's reading list.
Posted by Alexa Adams at 2:36 PM