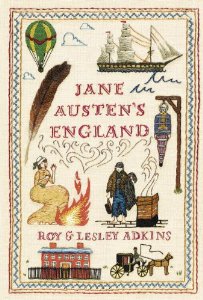 I received this book for review from Viking Press. Jane Austen's England will be released on August 15th, and it is one of several books by Roy and Leslie Adkins, a spousal writing partnership. Here they attempt to "show how the mass of ordinary people ... lived and worked in [Jane Austen's] England," focusing not on the genteel society she depicts, but the working people who supported such elegance. It was a time where horribly brutality was both commonplace and extremely public, and they relate detailed instances of babies drowning in cesspools, the market for corpses, the dreadful treatment of animals, and all the horror of child labor. It is a far cry from the ballrooms and parlors Jane Austen's name brings to mind.

Then again, maybe it really isn't. The Adkinses in many ways succeed in painting a vivid picture of what life was like for the majority, but they "have relied upon the words of people who lived at the time" to do so, and most of those who left such writings lived rather genteel lives. Pretty much all the first-hand accounts come from people who are easily comparable to both Austen's fictional characters and those amongst whom she lived. I found it somewhat irritating that the authors insisted on referring to these people as middle-class, when I would definitely describe them as gentry. The primary and most likable voice is that of Reverend James Woodforde, an unmarried clergyman who held the living at Weston Longville in Norfolk for most of his life, and whose life and times correspond pretty exactly to that of George Austen, Jane's father (Woodforde was a few years younger and died two years sooner). He was at least well off enough to be a sufferer from gout. Another major voice belongs to William Holland, another rector, and a rather curmudgeonly one. Most quotes from him involve criticism of his fellow beings, and it's is not until about two thirds of the way through the book that we learn the reason for his bad attitude: four of his five children died within two weeks of each other from scarlet fever. Until he so gained my sympathy, I pretty much had him and his wife pegged as Mr. and Mrs. Elton. Nevertheless, some of his writings are the most interesting included, providing great insight into the inescapable force of gossip during the era. Still more interesting to me were the observations of foreign travelers to England, like Carl Moritz from Germany and Bejamin Silliman from the United States. Georgette Heyer fans will get a kick out of the hostility with which Moritz was treated upon arriving on foot at a coaching inn. The one obscure woman quoted is Nelly Weeton, a governess, and much is made of her inclusion in both the intro to the book and the publicity for it. I suppose female voices are hard to find, and an impoverished governess must always be a figure of interest, but Bronte devotees might find her experiences disappointingly pleasant. Except when her student died in blaze of fire, she seems to have had a very pleasant situation in the Lake District, and she was retained by her employer as companion to the lady of the house (a marriage worthy of Heyer) after the child's decease.

Whenever relevant, Austen's letters are referenced. Her books are mentioned as well, but to less effect. Each chapter (organized by life events, from birth to death) begins with a quote from on of Austen's novels, but they don't always seem terribly well chosen. It is my suspicion that the authors are more familiar with her letters than her novels, which would make sense for the Adkinses, who are by profession archeologists, but Janeites reading this book might get frustrated with the simplified analysis of her writings. Unsurprisingly, it is usually Pride and Prejudice that is referenced. I admit to beginning this book with some suspicion as to why Jane Austen's name was in the title at all. Could this just be an attempt to capitalize on the Austen mania surrounding the 200th anniversary of P&P's publication? My concerns on that point were laid to rest in the chapter entitled "Dark Deeds," in which the authors tackle criminality. They make wonderful use of the case of Austen's aunt, Mrs. Leigh-Perrot, who was arrested on suspicion of stealing lace, to illustrate the massive inequalities of the justice system. Fascinatingly, William Holland wrote about the trial, assuming Mrs. Leigh-Perrot's guilt, even after she was found innocent. Here's red meat for the Janeite! Too bad they didn't leverage Cousin Eliza de Feuillide experience with the court system during William Hasting's impeachment trial to similar effect.

What the book attempts is impressive. I was particularly enthralled when menstruation came up, a topic on which I have never found any information. Unfortunately, neither did the authors, but their conjectures on how women might have handled the situation makes this the only resource I have ever found on the subject. Pretty much every detail of daily life is dealt with in depth, presenting an often gory picture of a massively unequal society. While I heartily recommend it, there is one caveat: if you read Austen's works to escape the harshness of reality (as I imagine is the case for most of my readers), than this is probably not the book for you. Though not much of what I encountered in Jane Austen's England was surprising, having it all illustrated so vividly introduces the very real problem of how to read her books without being haunted by images of rats, decomposing bodies, and sewage. Shall I ever be able to write a ball scene again without mentioning the unbearable stench of unwashed flesh and putrid breath? I certainly hope so!
Posted by Alexa Adams at 2:49 PM