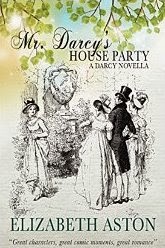 Just a short review of a quick and fun read: Mr. Darcy's House Party: A Darcy Novella by Elizabeth Aston. I have not reviewed her Darcy Series. I read it long before I began this blog, very early into a burgeoning JAFF addiction (I was still 20th century enough to be limited to the books I could find in a Barnes & Noble). I zoomed through the first four or five books in the series, both fascinated and irritated, having no idea I was reading my first Regency romance novel. I did not yet know such a genre existed! Page after page (and I couldn't stop turning) I kept looking for Mr. Darcy and Elizabeth, who are almost entirely non-existent in these stories. Instead, the focus is on distant cousins and the Darcys' five daughters (our dear couple are portrayed as having the supervisory skills of the man with the yellow hat). It was Ms. Aston who first introduced the word Almacks into my vocabulary, opening a whole new world for me to devour, but I had pretty much resigned myself to looking elsewhere for fine Austenesque, until last December when she released her first Darcy Novella: Mr. Darcy's Christmas (look for my review this holiday season).

With the Darcy Novellas, Ms. Aston has take her entire Darcy Series and anchored it to Pride & Prejudice in a far more satisfying manner. The best part, because these books are both prequels to the Darcy Series and sequels to Pride & Prejudice, is that you needn't have read the Darcy Series to find them perfectly satisfying (though a few names might seem odd). As ebooks, they are also inexpensive, but be warned: Ms. Aston's compelling storytelling might very well get you hooked, and the entire Darcy Series is not a cheap read. The Kindle editions start over $9, and there are six books in all. Just in case you were wondering, The Second Mrs. Darcy is my personal favorite, and it can definitely be read independent fromt he others.

Back to the house party - Mr. Darcy did not want one. He intended a quiet family weekend at Pemberley, just the Bingley's and themselves, but then the dashing Lady Sarah Fitzwilliam arrived and multitudes followed in her wake. The result is an uproarious romance much in the tradition of Georgette Heyer. Lady Catherine and Mr. Collins show up, too, which can only result in high entertainment. I love this interaction between Mr. Collins and the two eldest of the Darcy daughters, and I don't think it gives too much of the story away:


"A paradise," Octavius said admiringly, then stopped and looked down at Sarah.

They stood, gazing at each other for a long, long moment; hearts, eyes, feelings joined as one. Octavius took a step forward, and Sarah was about to fall into his embrace, when they heard the door of the hot house open and close and Letty's clear voice saying, "I saw them come in here, Mr. Collins."

They sprang apart and Sarah said, "That wretched child. She is one of those girls who cannot tell a lie, and she does not even have the sense to see that it is better never to say anything at all to Mr. Collins. Oh, lord, what a fix we are in!"

Octavius looked around and his eyes fell on a group of three large plants with broad leaves which were planted in huge pots. Seizing Sarah's hand, he pulled her behind them, and they knelt on the wooden slats of the walk-way.

They could hear Mr. Collins's heavy breathing - had he come here at a run? - and his even heavier footsteps.

Letty said, "What are you doing here, Camilla? You should be practicing the piano."

"I had ;earned my piece so well I was let off the rest of the practice."

"What are you doing in here, Mr. Collins?" Camilla asked. "Are you looking for something?"

Camilla said, "Oh, Cousin Sarah isn't in here. I came through the other hot house, and she was in there a moment ago."

Camilla said in tones of perfect innocence that Sarah knew concealed inner laughter, "Quite alone, Mr. Collins. She was admiring the jasmine. Its Latin name is Gardenia jasminoides, are you familiar with it?"

"You made that up," said Letty.

Sarah could see that Octavius was about to say something, but she laid a finger on his lips to prevent him. He caught her hand and pressed her palm to his own lips. They sat with bated breath while the footsteps dies away, Mr. Collins saying, "If she is alone, then there still may be time for me to prevent what would be a wholly inappropriate meeting."

Camilla's voice piped up, "My governess always used the word inappropriate, Mr. Collins. Pray tell me what it means."

Isn't that lovely? Guess which little Lizzy in the making is the focus of Mr. Darcy's Daughters, the first book in the Darcy Series.
Posted by Alexa Adams at 8:00 AM