The Prince Regent and Crew: Room 17 of the National Portrait Gallery, London 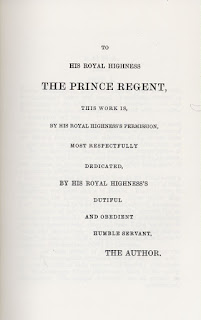 George IV doesn't get a lot of credit. Quite frankly, he's not very deserving of it. However, he did set the tone for the final years in which Austen lived, and though she spent most of her life under his father's rule, it is the Regency period with which we associate her. His best legacy is his patronage of the arts, and as an early admirer of Austen "suggested" she dedicate Emma to him. George IV might have been a ghastly leader, but he and his times maintain a hold on the collective imagination, and while I was exploring the National Portrait Gallery in London earlier this month I took particular interest in portraits of him, his contemporaries, and his associates. Here is a quick tour of Room 17 of the gallery, dedicated to George IV's regency and reign (1811-1830).

There are no less than four portraits of George IV in this room. I think that might be the most I saw of anyone in the entire museum. The two oldest are miniatures on display in a special case and date from the late 18th century. The first image portrays a younger, carefree prince, bright with promise of future mischief. He is about 20 years old, and it has been speculated that the miniature was commissioned for then-mistress Perdita Robinson. The second, in which he wears masquerade garb, was painted ten years later and is definitely a love token, as it is set in a locket with a a plait of hair on the back. The recipient might have been Maria Fitzherbert, the woman he illegally married in 1785, or another mistress. He officially parted with Mrs. Fitzherbert two years later (though they would later reconcile), that he might marry his cousin, Caroline of Brunswick, the following year. Desperately in debt, his father promised to bail him out if he went through with the marriage to a woman whom he had never met and came to despise.


George IV and his legitimate wife had one child, Charlotte Augusta of Wales, within a year of their marriage before separating. Princess Charlotte, unlike her parents, had the sympathy of the people, and when she died after days of agonizing childbirth at the age of 21 a massive public mourning was observed.


This flattering but unfinished portrait by Sir Thomas Lawrence was originally intended for use on a medal that was never struck. Lawrence was forced to defend this unbelievable likeness. Three years into his regency at the time it was painted, George IV had already reached his famously large proportions, years of decadence taking their toll. Still, it's a gorgeous painting. I have a thing for unfinished portraits.


Above find a work completed by Lawrence the following year. Again, it's very flattering (the Regent was well into his 50s), but I suppose that's what you have to do as portraitist to a monarch. I think this is how we often imagine George IV, in his elaborate military regalia. The Regency years saw Napoleons final defeat, but not because George IV was some sort of an awesome military leader, as portrayed in this portrait. He did, however, have a highly capable general and politician in Arthur Wellesley, 1st Duke of Wellington.


George III died in 1820, and the following year his son was finally coronated. Before he would ascend the throw, George IV attempted in vain to have his marriage to Queen Caroline annulled. Having been abroad for years, she hurriedly returned to England after George III's death and was greeted by exultant crowds. The matter was debated in the House of Lords, the painting below depicting the sixth day of the proceedings. When she was acquitted of adultery (of which she was most certainly guilty), George IV banned her from the coronation, on which day she fell ill. She died a few weeks later, claiming to have been poisoned.

Also displayed in Room 17 are portraits of George IV's brothers, busts of artists and politicians of the day, and a portrait of Horatio Nelson, whom I will address another day. I conclude with thoughts on why a tumultuous time period such as the Regency should have such romantic appeal to modern audiences. How much did George IV reflect and sculpt the times in which he lived? Is it the very chaos of his era that enthralls us? I could dwell on such questions forever, and this room of the gallery is the perfect place for such contemplations.