When posting my Twisted Austen story I am Lady Catherine way back in 2017, I received a lot of comments regarding a reference to an 18th century beauty treatment called pigeon water. This is indeed a real thing, used by none other than Marie Antoinette, who was said to have bathed her face in it every day. I hunted down the recipe for its preparation in the 1832 text The Toilette of Health, Beauty, and Fashion (read it here). This comprehensive book covers a wide swath of topics, as indicated by its incredibly lengthy subtitle (see the image of the cover page – it’s WAY too long to reproduce). I imagine it was mainly marketed to lady’s maids and valets. I found the history provided of both beauty treatments and fashion very interesting, though I should warn the modern reader that many of the comments are decidedly lacking in political correctness. I was inspired by the interest in pigeon water (see the recipe for Denmark Lotion below) to transcribe a few of the more outlandish preparations for both your amusement and revulsion, many of which are virtually impossible to imagine producing without an army of servants and were certain to wreck havoc on the health. I doubt it needs be said but for forms sake, I ask that you please do not attempt any of these at home.

Note: a drachm is a liquid measurement once used by apothecaries, equal to one eighth of an ounce. 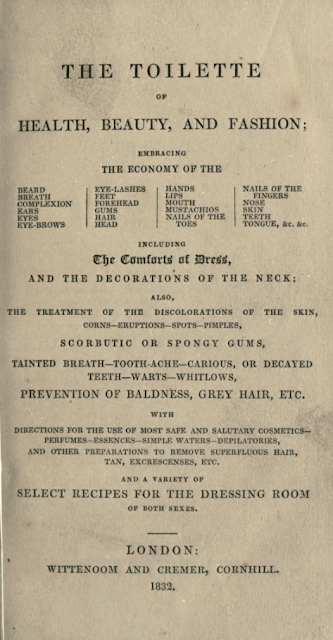 1.–Ointment for the Hair.
The editors of the “Dictionaire d’Industrie,” from which the following recipe is copied, assert that they have often witnessed the most surprising results from its use.

Take an ounce of beef marrow, to which add an ounce of grease skimmed from unsalted pot liquor, and boil them together in a pipkin. Strain this mixture, and add to it an ounce of the oil of ben. Let this be used occasionally, and the hair well combed and brushed, both before and after its use, to remove the previous scurf, and to work the preparation well into the roots of the hair, and along the tubes.

OBS.–Beef marrow applied moderately to the hair of the head nourishes it, and communicates to it a fine gloss, as may be frequently seen among butchers, who often apply it.  Whatever therefore nourishes, strengthens. The marrow also give it a disposition to curl. The oil of ben has long been entered into preparations for making the hair grow, and if a little of the essence of lemon, bergamot, or other other perfume were added, it would, at least, improve its fragrance, and preserve it against rancidity.

From Chapter VIII: Directions for Staining the Hair.

To stain Hair a light Chestnut Colour.
The hair is to be previously cleaned with dry bran, or warm water, in which alum has been dissolved. Then take two ounces of quick lime, which kill in the air; one ounce of litharge of gold, and half an ounce of lead ore. Reduce the hole to a powder, and sift it. Wet a small quantity of this powder with rose water ; rub the hair with it, and let it dry again in the air, and dry it with cloths a little warm. This powder does not stain the skin, like the wash made with aquafortis and assaying silver.

OBS.–It has been asserted that the hair may be stained black by impregnating it with lard, mixed with minium and lime ; but this composition, we apprehend, would produce only the chestnut colour of which we are here speaking. The hair may likewise be turned black by different vegetable substances boiled in wine, with which the hair is to be washed several times a day ; but this operation ought to be continued for some time. The substances usually preferred for the purpose are, leaves of the mulberry, myrtle, fig, senna, raspberry, arbutus, artichoke ; the roots of the caper tree ; the bark of the walnut and pomegranate ; the rinds of walnut, shumac, skins of beans, gall nuts, and cones of cypress. It is also necessary to use a leaden comb. The same object may be obtained by using a comb dipped in extract of lead.

From Chapter IX: On The Removal of Superfluous Hair

Depilatory of Ants Eggs.
A stronger depilatory is composed as follow: —
Take Gun of ivy, one once
Ants’ eggs }
Gum arabic } of each one drachm.
Orpiment }
Reduce these to a fine powder, and make it up into a liniment, with a sufficient quantity of vinegar. In pounding the materials, great precaution must be taken that the dust of the orpiment, which is a preparation of arsenic, be not inhaled.

OBS.–The formic acid, or acid of ants, may more easily be procured at the chemist’s, and will answer the purpose better than ants’ eggs, which are not to be had at all seasons.

To remove Hair from the Nostrils.
Take some very fine and clean wood ashes ; dilute them with a little water, and with the finger rub some of the mixture within the nostrils. The hair will be removed without causing the least pain.

OBS.– The hair of the nostrils, like those of the entrance to the ear, ought not to be removed, unless troublesome or unseemly ; they are the principal safeguards against the intrusion of insects, which might otherwise insinuate themselves into these delicate passages, to the great annoyance and danger of the individual thus invaded.

Denmark Lotion.
Take equal parts of bean-flower, and the water of the four cold seeds–namely, of pompion, melon, cucumber, and gourd, and of fresh cream ; beat the whole up together, adding a sufficient quantity of milk to make a wash, which apply to the face.

OBS.–This recipe is taken from the “Ami de Femmes.” Another writer says, that the cosmetic lotion used by the ladies of Denmark is totally different–it is what is called Eau de Pigeon (pigeon-water). It is composed as follows:–

“Take the juice of water-lilies, of melons, of cucumbers, of lemons, each one ounce; briony, wild succory, lily-flowers, borage, beans, of each a handful ; eight pigeons stewed. Put the whole mixture into an alembic, adding four ounces of lump sugar, well pounded, one drachm of borax, the same quantity of camphor, the crumb of three French rolls, and a pint of white wine. When the whole has remained in digestion for seventeen or eighteen days, proceed to distillation, and you will obtain pigeon-water, which is such an improvement on the complexion.”

A Pomatum to remove Redness, or Pimples in the Face.
Steep in clear water a pound of boar’s check till it becomes tolerably white ; drain it quite dry, and put it into a new glazed earthen pan with two or three hard pippins, quartered ; an ounce and a half of the four cold seeds, bruised, and a slice of veal about the size of the palm of your hand. Boil the whole together in a vapour bath for four hours, then with a string cloth squeeze out your pomatum into an earthen dish, placed upon hot ashes ; add to it an ounce of white bees’ wax and an ounce of the oil of sweet almonds, stir it with a wooden spatula till it becomes cold.

Another (Dentifrices).
Rub them with nettle or tobacco ashes, or with vine ashes, mixed with a little honey.

From Chapter XIX: Eyes and Nose.

For watery and inflamed Eyes.
Foment frequently with decoction of poppy heads ; when the irritation and inflammation occur, a teaspoonful of cogniac brandy, in four ounces of spring water, may be used three or four times in the course of the day as a strengthening lotion.

The growth of the eye-lashes has been promoted, where they have been lost by sore eyes, by the following simple ointment:–

Take ointment of nitric oxyde of mercury; 2 drachms
Hogs lard – – – – – – – – – – 1 drachm
Incorporate the ointment well with the lard, and anoint the edges of the eye-lids night and morning ; washing after each time with milk and water, warm.

From Chapter XXIII: The Hands and Nails.

For Chapped Hands.
Take three drachms of bole ammoniac–three drachms of myrrh, and a drachm of white lead.–Incorporate these with a sufficient quantity of goose-grease ; and with this anoint the parts affected; and wear worsted gloves.