As you may have gathered, Halloween is important to me. I love any excuse to dress up, so this is a holiday has always suited me perfectly. Unfortunately, the celebrations were very curtailed this year. We were able to participate in some very limited, socially distanced trick-or-treating, a feat rendered easier by the fact that most people do not celebrate Halloween in Switzerland, although it's catching on. 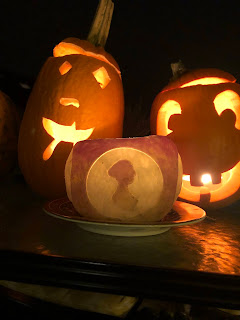 Even though Halloween is my own, much beloved way to celebrate the autumn, I think I was actually far more disappointed to miss out on our new tradition, adopted only since we relocated, and much more akin to the harvest festivals of millennia ago than the candy-fueled masquerade the English speaking world indulges in today. In a normal year, all the school children would have gathered at the top of the town last night (like so much of Switzerland, we’re built on a hill). All the lights would be turned off, revealing windows filled with the Swiss-German equivalent of jack-o-lanterns: Räbeliechtli (ra-ba-leekt-li). In English, this roughly translates "little turnip light." In my town, the school children build parade floats covered in the things, and each one carves a Räbeliechtli to carry, suspended from a string or mounted on a stick like a torch. They parade through the town (this is called the Räbeliechtliumzug), more children and adults joining in along the way, until we all descend en masse upon the main town square, where there is an award for the best float and free sausages for all the kids. It’s really hard to explain the experience, but take my word for it, it is absolutely magical, perhaps particularly because no one ever catches on fire or burns down the town. The atmosphere is perfectly fairytale. It's a tradition I have come to adore in the past five years. I'm really rather devastated it has been cancelled. I had high hopes, before the latest surge in the virus, that we would would still get to do it.
The videos embedded in this post will have to hold me over until next year (please, oh please may life be more normal by then!). Though they are not from my town’s celebration, I chose them because they begin to capture the experience (for images from the biggest Räbeliechtliumzug in Switzerland, check out these from Richterswil’s Räbeliechtlichilbi, not far from where I live). Enjoy them! Most of the songs you will hear are specific to this celebration and in Swiss German, like Räbelichtli, wo gahsch hii?, with a notable high German exception, Ich gehe mit meiner Lanterne, coopted from the St. Martin's celebrations that take place in Germany on November 11th. Hopefully, the clips work in all countries.
And does this have anything to do with Miss Austen? That picture of the top of the post suggests it does. Admittedly, I’m reaching more than a bit, but I look to the good people at the Jane Austen Centre in Bath for precedence. A few years ago, they published a fun article with instruction for carving your own “Jane-o-lantern,” including some history of Halloween. After providing the common origin story of the holiday, derived from the Celtic harvest festival Samhain, the author explains how these traditions were celebrated in Austen’s time:

During the night of spooks and ghosts, homes would be lit by rustic lanterns carved from turnips (known early on as neeps) beets and rutabagas. Pumpkins would be used later, as they were brought to Europe from the New World in the 17th century. These flickering lights were set out in hopes of welcoming home friendly souls and chasing away the evil spirits who wandered that night.

Jane Austen would have been aware of these celebrations and divination rites; however, as the daughter of an Anglican clergyman, it is doubtful that she would have partaken in such goings on…. She mentions neither these holidays or her feelings towards them.

There, at least, is the turnip connection. Often the last vegetable of the harvest, turnip lanterns were a natural choice for carving but more labor intensive than pumpkins (trust me on this: they are much less forgiving, you need a lot more of them, and they rot faster). The internet is alive with images of creepy turnips, carved by people harkening back to the past, often in the style of jack-o-lanterns. This is not what the Swiss do. They carve beautiful turnips, often decorated with Christmas images. The Christmas season has already begun here, though it needs a few more weeks to get into full gear (Samichlaus, the Swiss equivalent to Santa, has his big day December 6th, while the Christkind visits on the 24th).

If you’ve never carved a giant turnip before, the inside is solid and takes a bit of work to hollow. The smell is somewhat similar to horseradish, though not as intense. I imagine that if I had been doing this all my life, it would reek of childhood nostalgia. As it is, I need a pumpkin to conjure such sensations. There’s something about the texture of the pulpy seeds slipping between my fingers and that sweet, fresh scent. It’s kind of hard for a humble turnip to compete, but it is going to try, parade or no parade. I have two turnips waiting, one for each child, and we'll carve them tonight to display on the balcony. 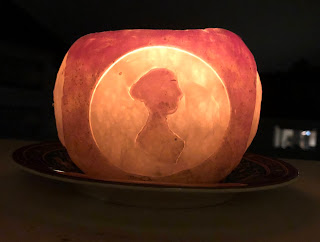 Last year I carved my own Räbeliechtli, instead of just helping my kids with theirs, inspired by the Jane-o-lantern concept. Not sure what to call it (Janeliechtli doesn’t really work), but of the thousands of turnips decorated in my town that week, I feel pretty confidant that I was the only one who opted for an Austen motif. I was pleased enough with the result to write this entire post about it, and it's been an exceedingly nostalgic and bitter sweet experience. My hopes are all for next year. It's such a beautiful tradition. Thanks for reminiscing with me.
Posted by Alexa Adams at 6:00 AM