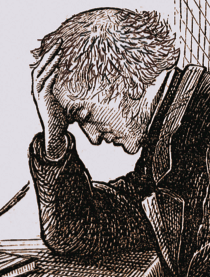 Happy New Year! When I last wrote, I was full of hope for 2022. Unfortunately, the year got off to a very disappointing start, as my family succumbed to COVID. I almost wrote finally succumbed. There was a definite sense of inevitability as it dawned on me, through heavy brain fog, what it was that ailed me. Today is the family's first day out of isolation, and I'm trying to get my head back on straight and process what happened to us. Forgive me as I completely abandon Austen for the moment and use this forum as a place to record and reflect on the experience.

It's really difficult to know where to begin.

My husband and I are double vaccinated. We had appointments to get boosters (now rescheduled for next week), but because of the Swiss system of eligibility, we could not have legally gotten them within this country in time to avoid infection. My brother-in-law, who lives in Germany and received his booster just about a week before we got sick, was with us over Christmas, while we were all infected, and repeatedly tested negative.

First my son got sick, and on his birthday, poor little guy, but it did not appear to be COVID. He had a sudden fever which went down quickly with medication and dissipated completely over the next 24 hours. No other symptoms. I wrote this off as another of the many common, mysterious childhood ailments that circulate in nursery schools. Fortunately, everyone was home for the holidays (when everything, including most test centers, are closed here) and not socializing outside the house, anyway. Then my daughter complained about headache, ear ache, and throat ache, but only when she was bored. As she danced about the house the rest of the time, I did not worry. She has a history of anxiety headaches, and she was starting a new school on January 3rd. This seemed the more reasonable explanation for her discomfort. Then, suddenly, my ears started to ache. I thought it could be sinus pressure, but it felt different. More like a dull ache in the ear canal itself than the far too customary throbbing from my sinus cavities. John said he felt off, maybe sick. Alarms were starting to knell in my head, but it was now his birthday, and he seemed to be rallying, so we proceeded with our cooking and feasting plans. Shortly before dinner, I said I needed a quick nap. I pretty much slept for the next 48 hrs. Fortunately, John was not as debilitated as me. He and the kids managed to enjoy a cozy New Year at home sans Mama, and for that I am grateful.

I do not know what variant we had because of the difficulty accessing full testing options over the holidays, but I can tell you what it felt like. It was certainly what is referred to as mild COVID. I had no fever or trouble breathing. It did not feel like the common cold or rhinovirus, to which I'm susceptible. The brain fog, as mentioned, was prevalent, but it wasn't only effecting the clarity of my thoughts. My entire head felt kind of vacuous: a strange sense of emptiness. "Fog" is an inadequate descriptive. The lack of mucous left my nose feeling voided, and the sensation seemed to penetrate outward until it pressed against my skull, causing a dull but constant pain. I had never felt anything like it before, and because of the novelty of the sensation, I pretty much knew exactly what I had before the test confirmed it. After I woke up and rejoined the world, I continued to have short waves of sickness over the next several days, despite otherwise feeling pretty normal. By the end of the week, this had passed, but then, seemingly suddenly, both John and I lost our sense of taste and smell.

This is terribly disconcerting.

I am the buyer and preparer of my children's food. How can I pick out fruit, when I can't even smell sour milk? I also can't tell if they need a bath, or smell smoke from the fire.

The good news is that we seem to be slowly regaining our sense of taste. I can now vaguely taste cheddar cheese (my favorite), when I couldn't a week ago. I can tell if I brushed my teeth or not. All this is a strong indicator that we will recover. I cling to that thought and look forward to the day that I can bring a vast new appreciation to every thing I taste and smell. May it be soon! We're a foodie family. I don't know what we do without that joy in our lives.

Other good news: though my daughter was horribly disappointed to not be able to begin school in person on the 3rd, we found the new school's home learning plan massively superior to what we had before. She was very happy and surprisingly calm when I dropped her off this morning. This afternoon, she takes her first ever school bus ride (they are not common here). She's so excited, and so I am. I can't wait to hear all about it.

So that's the bulk of my saga. To cope with isolation, we went ahead and celebrated Christmas again last weekend. We made gifts for each other and cooked up another feast (which the kids tell us tasted good). We also watched the entire Harry Potter film collection while running about the place on broomsticks fashioned out of old wrapping paper rolls. We had fun, but thank goodness it's over.

Now to start picking up the dropped pieces of my life. I should probably start by taking down the Christmas tree. It's dried to a crisp, and I can't smell smoke.

May 2022 fulfil all my best hopes for it, despite this inauspicious start. I wish you all health, happiness, and Austen galore. Next week ...