Thoughts composed after rereading Forster's Where Angels Fear to Tread 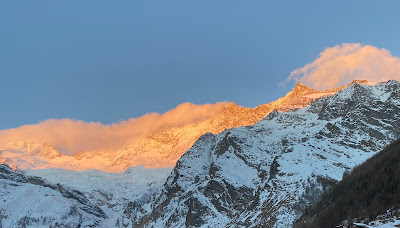 We just returned from what has become an annual ski vacation. I even skied this time, for the first time, I believe, since 1985. It went ... ok I guess? I'm even considering trying it again next year, but this time I must insist on a proper instructor, not my husband and daughter.

We were at the same resort two years ago, when COVID was just hitting the news. Having had a lifelong fear of epidemics/pandemics, it had already on my radar for five or six weeks in February 2020, especially when Jack got sick with flu-like symptoms that trip. We were there again last year, masked but unvaccinated. So it felt like we were coming full circle this year, when the Swiss government lifted the vast bulk of regulations on the 17th. The hospitality workers were quite giddy, though still only cautiously hopeful that the end of this pandemic really might be approaching. Everyone is so tired and traumatised. I do so hope that we all find the time to heal. 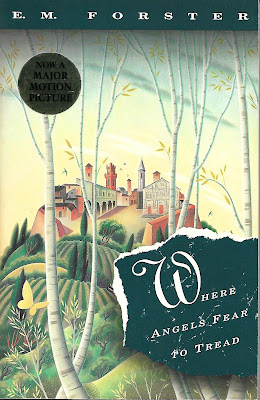 That simmering optimism was at odds with my reading material (to say nothing of the news cycle, which I did pay some modicum of attention to). I hadn't read any E.M. Forster in a good many years and sort of thoughtlessly threw a copy of Where Angels Fear to Tread in my bag. I was curious to reread an old favorite author, to see how my perspective on his works might have changed with both social progress and age. It is his novel that I had read longest ago and only once, when I was still in high school, and I did not recall much about it. It just so happens to also be his first novel, and I am feeling some temptation to continue through his work chronologically, if I can find the time.

Such an endeavor really should be accompanied by a survey of modern literary criticism of his work. I really am not sure what current scholars have to say of him. His glaring imperialism can be incredibly disturbing. It seems amazingly unconscious on his part, his presumption of British supremacy is so thickly woven into his plots. At the same time, his voice is vitally important as one of the very few gay voices represented in the English literary canon, and those same plots, infuriating in their arrogance, tell heartbreaking tales of isolation, fractured identity, and the torture conventional society can inflict on those forced to adhere to its strictures. At the climax of Where Angels Fear to Tread, I threw the book from me and ferociously paced the room, weeping hysterically. The pain was so, so raw. How did I not recall it? I must have been far too young to understand what I was reading.

My grand takeaway was a violent warning against overly managing parents, more concerned with reputation than their children's well-being.

Austen also addresses these themes, in the horrors of Eliza William's fate in Sense and Sensibility and Sir Thomas' hubris in Mansfield Park. Such potential simmers in characters like General Tilney of Northanger Abbey, Lady Catherine of Pride and Prejudice, and Lady Russell of Persuasion.

The darkness of the text and its imperialist perspective notwithstanding, the story somehow still manages to include absolutely brilliant comical moments, most accessible to me in the clash between English and Italian cultures. There is one scene in particular, where three English travellers in Italy go to the opera, that perfectly resemble real exchanges I have witnessed in my travels. His depiction brought particularly to mind a visit to the Arena di Verona in 1999 to see Aida, where the large contingency of Germans in the audience took exception to the more raucous behavior of the Italian attendees (the latter were adept at perfectly ignoring the former). In the book, the performance is Lucia di Lammermore. I've always wanted to see this, as The Bride of Lammermoor, upon which it is based, is my favorite Sir Walter Scott novel (in keeping with my well-established penchant for books about insanity). Perhaps that contributes to my delight in this moment:

Harriet, meanwhile, had been coughing ominously at the drop-scene, which presently rose on the grounds of Ravenswood, and the chorus of Scotch retainers burst into cry. The audience accompanied with tappings and drummings, swaying in the melody like corn in the wind. Harriet, though she did not care for music, knew how to listen to it. She uttered an acid “Shish!”

“Shut it,” whispered her brother.

“We must make a stand from the beginning. They’re talking.”

“It is tiresome,” murmured Miss Abbott; “but perhaps it isn’t for us to interfere.”

Harriet shook her head and shished again. The people were quiet, not because it is wrong to talk during a chorus, but because it is natural to be civil to a visitor. For a little time she kept the whole house in order, and could smile at her brother complacently.

Her success annoyed him. He had grasped the principle of opera in Italy—it aims not at illusion but at entertainment—and he did not want this great evening-party to turn into a prayer-meeting. But soon the boxes began to fill, and Harriet’s power was over. Families greeted each other across the auditorium. People in the pit hailed their brothers and sons in the chorus, and told them how well they were singing. When Lucia appeared by the fountain there was loud applause, and cries of “Welcome to Monteriano!”

One can almost feel sorry for Harriet (but not really).

These were the literary musings that entertained me while on holiday. I wish I had been able to read more. We are supposed to go to Florence this spring ... A Room with a View might prove irresistible in its temptations.

I had better hurry up and find those modern essays on Forster. Any suggestions?