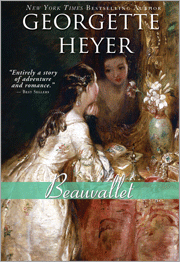 After celebrating Christmas a week early with my husband's family, the holiday itself proved unusually quiet, with little activity other than showing up at my aunt and uncle's house in order to stuff ourselves silly. We spent the very welcomed downtime (extended into today due to the timely snowstorm) with Georgette Heyer. Those of you who have been following my Heyer reviews know that my husband and I read her books aloud to each other - her light, adventurous tales and witty dialogue being fabulous for oral recitation - but in case any of you thought I was forcing him into this activity, I'd like to emphasize that it was he who asked if we had any more of her books on hand to read over the weekend, and when I replied in the negative, suggested a trip to the bookstore to procure a few. I find it important to emphasize this fact because of the number of men I encounter who scoff at romance as a purely feminine genre. Heyer's action pact stories are beautifully suited to both male and female sensibilities, and the thoroughly swashbuckling Beauvallet is a perfect example of this fact.

Our story begins aboard a grand Spanish ship, engaged in a seas battle with the notorious English ship, the Venture, captained by the infamous El Beauvallet, the scorge of Spain's armada. It is the Elizabethan Era, the Spanish Inquisition is in full swing, and El Beauvallet is regarded as not only a fierce pirate by the Spaniards, but also as a practitioner of witchcraft, his remarkable conquests and escape affording his enemies no more probable explanation. The haughty Spanish captain who believed he would be the one to capture the notorious pirate, foolishly challenging the Venture, faces defeat as the English crew boards his chip. What Sir Nicholas Beauvallet does not expect, as he brings the Spanish captain to his knees, is that his foe was so cocky as to engage in battle while escorting noble passengers, whose safety should have been his first priority: the former governor of Santiago, Don Manuel de Rada y Sylva, and his beautiful and indomitable daughter, Dona Dominica. Beauvallet, being a true English gentleman (no less than the son of baron and heir to his childless older brother) guarantees to sail the passengers safely to Spain, even though there is a price on his head in that country. Such acts of daring are commonplace to our hero, often known as "Mad Nick", as readers of this delightful book quickly learn.

While not as comic as some of Heyer's other novels, Beauvallet is so action pact that I defy anyone not to become completely enrapt within the Renaissance world it depicts. What humor there is in the tale mainly originates from Sir Nicholas' lacky, Joshua, who is his most constant companion in adventure, as well as the only man willing to criticize the great Beauvallet, and often serves as narrator to the story. Therefore, it seems fitting that Joshua introduces us to his master's character, as he says to a disdainful Dominica while helping her settle into her new quarters aboard the Venture:


"I have served him these fifteen years, and seen none equal him. And I have been about the world, mark you! Ay, we have done some junketting to and fro. I allow you Sir Francis Drake to be a man well enough, but lacking in some small matters wherein we have the advantage of him. His birth, for example, will not rank ours. By no means! Raleigh? Pshaw! he lacks our ready wit: we laugh at his sour countenance! Howard? A fig for him! I say no more, and leave you to judge. That popinjay, Leicester? Bah! A man of no weight. We, and we alone have never failed in our undertakings. And why, you ask? Very simply, senora: we reck not! The Queen's grace said it with her own August lips. 'God's death,' quoth she - her favorite oath, mark you! - 'God's death, Sir Nicholas, you should take Reck Not to be your watchword!' With reason, most gracious lady! Certain we reck not. We bite our glove in challenge to whosoever ye will. We take what we will: Beauvallet's way!"

Though visiting the Tudor court and meeting a great number of the impressive personages named by Joshua (as well as Walsingham and, later, King Philip II of Spain) adds to the excitement of the novel, it is nothing compared with the feats of daring Sir Nickolas seems to be constantly performing. The main plot revolves around his falling in love with Dona Dominica and pledging to return to Spain within the year to claim her as his wife, a task that proves to involve espionage, impersonation, prison breaks, and the 16th century equivalent of the police chase. There is not a dull moment to be had. I highly recommend this book to anyone seeking escape from the mundane limitations of our 21st century reality. A raucous romp with El Beauvallet is precisely what the doctor ordered.
Posted by Alexa Adams at 5:56 PM