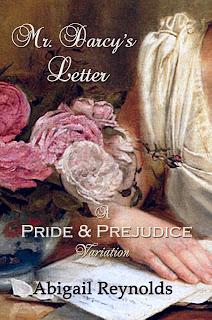 A new Pemberley Variation from Abigail Reynolds is always the cause of great excitement. I had been anxious to read Mr. Darcy's Letter since it came out last year, but it was not until we traveled to Texas for the Easter holiday that I found an opportunity to indulge myself. My anticipation for this novel was particularly high as I had read a draft snippet of the story a few years ago on Ms. Reynolds' blog, and I have been waiting ever since to learn where she would take it. Compound this with the fact that her last book I read, Mr. Darcy's Obsession (you can read my review here) was, in my opinion, the very best she has yet written, and you can begin to understand my towering expectations. Under such circumstances disappointment was, perhaps, inevitable, but such rationale doesn't lessen the sensation. It was a quick read, and it kept my attention, but Mr. Darcy's Letter is just not as well crafted as Ms. Reynolds' previous offerings.

The premise for the story is a good one: Elizabeth never reads the letter Darcy writes to her after his failed proposal at Hunsford. With her usual ease, Ms. Reynolds grabs our attention in the first few pages, twisting Austen's plot on its head:

He knew the instant that she saw him, for she became still, as if rooted to the ground. She began to retreat, as if hoping her presence had not been noticed, but he could not allow her to escape, not now. "Miss Bennet!" he called.

She stopped at the sound of his voice, but did not look up. She could have been a doe, poised on the brink of flight, held in check only by the gossamer bonds of good manners. Now was his moment. He forced his feet to move, first one step, then another, till he stood so close to her that her lavender scent wafted over him. She stood, her gaze averted.

She could still take his breath away. Even knowing she hated him, he longed to taste her soft lips under his - or perhaps to shake her until she saw sense. Instead, he held out the letter he had spent the entire night writing. Striving to keep his voice even, he said, "I have been walking the grove for some time in hope of meeting you. Will you do me the honour of reading this letter?"

Elizabeth reached out to take it, but froze with her fingers only inches away from it.  Her hand slowly closed onto itself and withdrew. "I cannot accept it." Her voice sounded strangled.

"I do not ask this of you lightly. There are matters in it of utmost importance," he said icily.

She folded her hands behind her back. "Mr. Darcy, you know as well as I that a single lady cannot receive correspondence from a gentleman. Your opinion of my family's manners may be low, but I assure you I understand that much of proper behavior."

He flushed. "This is not the time for foolishness. No one will know of it, and I must insist that you read it."

Her eyes widened and she took a step back. "You presume too much, Mr. Darcy. I wish you good day." She turned and hurried away, almost at a run.

Darcy does manage to get the letter into Elizabeth's hands, but she stubbornly burns it. When the two meet again at Pemberley, her opinion of both him and Wickham remains unchanged, leaving Mr. Darcy an uphill battle to win Elizabeth's affections. Fortunately, he is very capable, but when Elizabeth leaves Lambton before informing him of Lydia's elopement, things indeed look bleak for their future. We follow Elizabeth and Darcy through what has become the standard series of anxious moments and misunderstandings in "What If?' reimaginings. I see nothing wrong with sticking to a formula that works, but it certain helps when the outcomes are probable. This story relies on too many surprise devices [SPOILER ALERT], like an older Wickham brother, for believability. There are also some inconsistencies and non sequiturs in the book that further strain an already convoluted series of events. Perhaps this is the result of Ms. Reynolds having self-publishing this book and not having the benefits of Sourcebooks' excellent editors (a plight with which I can ready sympathize). Regardless, I would have enjoyed the novel far more if it were tidied up a bit. I could also wish Ms. Reynolds had not reverted back to her usual formula of anticipating the wedding vows, but I recognize that my preferences regarding such issues do not conform to the vast majority's. As it is an issue I've already dwelt on at length, I will endeavor to let it go on this occasion.

Adieu to disappointment and spleen! Despite my snippy complaints, I really must recommend this novel, and for several good reasons. First and foremost, this is Abigail Reynolds we are speaking of, to quote myself, "the Godmother of the 'What If?' genre", and all her books are great fun. Secondly, as this is a self-published offering, it behooves fans to support talented writers. And third I offer up the book itself, providing an entirely new and uncharted destiny for our favorite couple, even if the going gets a bit awkward. After all, one can never have enough Darcy and Elizabeth, can one?
Posted by Alexa Adams at 5:18 PM