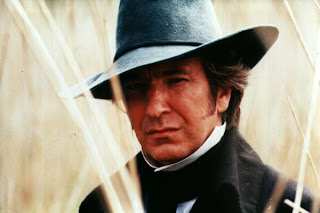 "Colonel Brandon, the friend of Sir John, seemed no more adapted by resemblance of manner to be his friend, than Lady Middleton was to be his wife, or Mrs. Jennings to be Lady Middleton's mother. He was silent and grave. His appearance however was not unpleasing, in spite of his being in the opinion of Marianne and Margaret an absolute old bachelor, for he was on the wrong side of five and thirty; but though his face was not handsome, his countenance was sensible, and his address was particularly gentlemanlike."

Name: Colonel Brandon. Austen tells us no more. (For more information, check out this fabulous post on the subject: https://janeausteninvermont.wordpress.com/2012/03/20/a-colonel-brandon-by-any-other-name/#comment-22998)

Hobbies: Reading, music appreciation, hunting, and saving damsels in distress (though he sometimes too late). 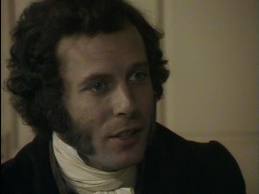 Most Detrimental Tendency: The Colonel is terribly lacking in a sense of self-esteem, a thing his bride has in abundance. Life has taught him to value himself rather cheaply, but other than his self-deprecation, he is almost entirely lacking in those flaws that render other Austen heroes interesting.

Greatest Strength: He is a perfect combination of those two qualities for which the novel is named, and which its heroines individually embody. As Elinor notes, he is sensible, hut he is also provided with an abundance of sensibility.

Truest Friend: We must suppose it to be Sir John Middleton, as he is the only friend to the Colonel of which we know. Furthermore, we must suppose this to be a very unequal friendship, as far as intellectual companionship goes (credit is due to Andrew Davies for making something more substantial out of this relationship in his 2008 adaptation).

Worst Enemy: As his father and brother have died, we are left with Willoughby. 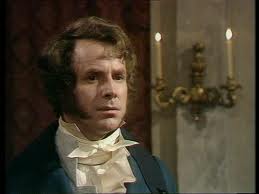 Prospects: Far better than he once expected. The passing of both father and older brother have left him in possession of Delaford, and following some five years of careful maintenance, he is presumed to have returned the estate to a condition in which it provides him with something like 2000 pounds a year, its value in its heyday. Of course, none of this provides the man with much personal satisfaction.

Favorite Quotations: "The cruelty, the impolitic cruelty,"--he replied, with great feeling,--"of dividing, or attempting to divide, two young people long attached to each other, is terrible.--Mrs. Ferrars does not know what she may be doing--what she may drive her son to."

"...where the mind is perhaps rather unwilling to be convinced, it will always find something to support its doubts..."

..."and yet there is something so amiable in the prejudices of a young mind, that one is sorry to see them give way to the reception of more general opinions."

"... though where so many hours have been spent in convincing myself that I am right, is there not some reason to fear I may be wrong?" 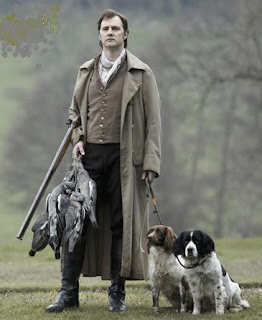 Musings: I have bee struck anew when writing this post at how little Colonel Brandon ever says for himself in the course of the novel. Outside of two or three longer speeches, in which he reveals his past and proves his goodness, he is virtually silent. This makes for easy portrayal of him in film as brooding and melancholic, but it renders my task here rather difficult. What Austen reveals about this hero is almost entirely secondhand - a very strange method for an author so meticulous in her character development. Granted, this is in keeping with her tendency to show character through action rather than relying on words alone, but the Colonel never comes to life in the manner of her other heroes. Rather than a distinct creation, he is almost a caricature of a romantic hero: hopelessly devoted to his love(s), the first to rescue those in distress, and the only Austen hero to ever even contemplate, let alone take part in, a duel. He is quite the knight in shinning armor, and perhaps the most interesting thing about him is that Marianne is so completely oblivious to his romantic potential, a classic example of the good guy being overshadowed by the bad boy. My strongest emotion in regards to Colonel Brandon is that of deep pity, for even after winning his lady love one must wonder if she will ever really comprehend him or be truly sympathetic to his plight. I fear marriage to Marianne will be just a new form of suffering for him to endure, and as I am loathe to write him of as a masochist, he has my heartfelt sympathy.