(Note to readers: I began writing this post last Monday, but my daughter has been sick all week, and I never managed to finish it until today. These circumstances have rendered the following content, like that of Northanger Abbey, is a bit dated upon publication, though the closer proximity to Valentine's Day is entirely appropriate for such a wonderful love story)

I meant to spend last weekend reading all twenty-six, frenzied posts from the one woman experiment in insanity that was my version of a Pride & Prejudice Readathon (I'm so out of the loop these days I did not even know the BBC was having their own Readathon on the 200th anniversary until the day before, and the realization only increased the already intensely isolating quality of the experience), but I do not yet have the courage to confront it all. Instead, I delved into the world of Donwell and Highbury with Barbara Cornthwaite, rereading George Knightley, Esquire Book One: Charity Envieth Not (read my review here), and tearing through Book Two: Lend Me Leave. One benefit of the Readathon seems to be the reclamation of my reading time. Hallelujah! May it only last. 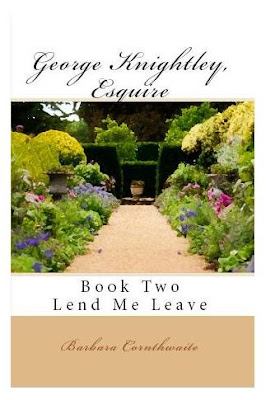 I've been aching to read this book for several years, and it is the kind of yearning the makes me nervous, for I have been burned before: adoring the first book of two in a series and finding its  conclusion disappointing. Not this time. Ms. Cornthwaite has again brought alive the world of Mr. Knightley with stunning clarity. In Emma, Austen gives us her most broadly developed community (thanks in no small part to Miss Bates), and Ms. Cornthwaite collects each and every detail, spinning and expounding them into a faithful narrative for our hero. Here is Mr. Knightley, lord of the manor, settling the disputes of his tenants, attending meetings at the Crown, fulfilling his function as magistrate, and generally making sure everyone in his realm has everything they require. Due to my long and abiding interest in the treatment of madness in the 19th century (which, synchronistically, plays a roll in the new P&P sequel I've been planning), I particularly enjoyed his efforts to establish a county asylum, an endeavor compelled by the blatant insanity of a tenant's sister. The book is chock full of similar episodes, anchored in history, of a benevolent landlord's daily occupations and concerns, but the plot's driving force remains those events original to Austen.

In the first book, the timing of Mr. Knightley's realization of his love for Emma was perfectly developed, and in book two we see him struggling with the consequences of this awakening, particularly his jealously of Frank Churchill. I admit to sensations of discomfort while watching Mr. Knightley lose his well-regulated mind to love. His passion is potent, verging on obsessive, and while I find Ms. Cornthwaite's depiction both believable and touching, it is not how I'm inclined to imagine Mr. Knightley coping with his emotions. I feel somewhat guilty recording this slight criticism, for overall the insight into his mind is blissful in its perfection. His observations of Mrs. Elton are priceless, as in this letter to brother John:


Yes, the new Mrs. Elton is now among us. I imagine that Isabella will soon hear from Emma on the subject, tho' I think Emma will likely moderate her words for her sister. You will have a fairly accurate picture of Mrs. Elton's character when I tell you about the call the Eltons paid to the Abbey today as they returned my wedding-visit. You will be pleased to learn that in her estimation, the Abbey compares favourably with Maple Grove, the seat of her sister's husband. You have never heard of the place before, you say? Neither had I, which now seems incredible, as I gather that it is the pride of Somerset. As Maple grove has been in existance for, I take it, something less than a century. and is evidently decorated in the first stare of fashion, the only resemblance Mrs. Elton could produce between Maple Grove ad Donwell is the air of refinement and - she almost said "wealth", but replaced it just in time with "Prosperity".

She is much disappointed with the card-parties in Highbury. Her hostesses, one and all, have neglected to serve ice at their gatherings (where does she suppose they will get it from? This is not Bath), and, worse, no one has taken the trouble to purchase new packs of cards for each table. She has evidently not grasped the fact that it is done in the large parties of Bath in order to prevent cheating, not as a proof of elegance. Or perhaps she has understood the reason, and is in fact suspicious of Mrs. Goddard or Mrs. Perry, supposing them to be regularly cheating the other ladies out of a sixpence or two. I could believe either of her.

I also love this scene on Box Hill, before Emma's rudeness, as it beautifully displays the keen capabilities of his heart:


"It is breathtaking, is it not, Mr. Knightley?" said Miss Bates at his side. "I was here many years ago - dear me, it must be twenty-years now - when I was rather a young lady. A small party of friends - Captain Fairfax and my sister, Mr. Prescott and his sister - my father's curate, you know."

Mr. Prescott... Good heavens, I had forgotten all about him, thought Knightley. Mr. Prescott had been the last curate in the parish of Highbury, before the town's population had diminished to the point where a curate was not needed. Knightley's memories of the man were verty dim, and he seemed to recall that he had been a tall man who had married a woman from Langham and soon afterwards been given a parish somewhere in Hampshire.

"My dear Jane," said Mrs. Elton, "Come and look at this! I believe you can see that church from here - remember the church with the odd tower we saw on the way here? Come and see if it the same one."

Miss Fairfax came dutifully to Mrs. Elton's side and looked out into the distance in the direction Mrs. Elton was pointing out.

"You may be right, Mrs. Elton," said Jane in so listless a tone that Knightley looked at her thoughtfully. Miss Fairfax had escaped Mrs. Elton's company yesterday by walking home, but she could hardly do the same today.

"My dear Augusta," said Elton, "ought the food baskets to be sitting in the sun there? I would have thought that the shade of a tree might be a better place."

"I told the servants to move the baskets - that shiftless Betty does not hear one word out of three that I say. I will go and see to it that things are done properly - servants can never be expected to think of these things."

She started off, with Elton at her heels, and Knightley saw his chance.

"Miss Bates, Miss Fairfax - will you join me in exploring the hill?"

"Yes, thank you, Mr. Knightley," said Jane, with the first smile he had seen from her all day.

"Have you heard anything of Mr. Prescott lately?" asked Knightley. "I have not thought of him these ten years or more. I believe he was living in Hampshire."

"Oh, yes - he has a parish near Petersfield. Sophia - his sister - writes to me. We used to go on drives quite often - we had the carriage then, and dear Papa would let us drive with - I think he rather hoped - ah, well. How long ago that was, to be sure!" There was a wistful note in her voice as she said the lasy.

Long ago, indeed. The Bates' had not had a carriage for the last decade, at least. Miss Bates had been a young lady then - he could not picture her as demure, for she would always have been talkative - but in her youth her leading characteristic must have been her enthusiasm. He had a vision of her as a young lady with a party of friends - bubbling over with good cheer, enthusiastic for every scheme proposed - perhaps being escorted by Mr. Prescott - who Mr. Bates evidently had hoped would marry his daughter. Knightley glanced at Miss Fairfax to see what she thought and was struck bu her inattention. She walked languidly and seemed to be indifferent to her surroundings. It might be that she was weary - the heat was oppressive and any exercise in it was liable to produce exhaustion in one who had been lately ill.

Like all the best Austenesque, the George Knightley, Esquire series illuminates the original book for a reader, shining new light on the nuances and intimations of the text, while providing what we most crave: more time with Austen's irresistable creations. I love that this genre has given devoted Janeites a new medium for discussing Austen's texts, and Ms. Cornthwaite has added admirably to the conversation.
Posted by Alexa Adams at 11:41 AM