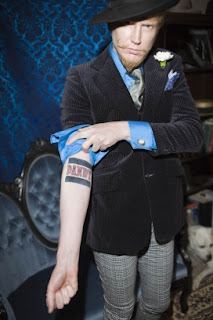 I was lucky to return to Providence, Rhode Island earlier this month, this time without my daughter, and went back to the RISD Museum to view the current exhibit - Artist / Rebel / Dandy: Men of Fashion - in more detail than my previous visit allowed (check out my first post on the exhibit here). I was particularly interested in getting a closer look at Richard Dighton's panoramic Mirror of Fashion, made in 1823 and featuring several prominent society gentlemen of that time. The exhibit is opened through August 18th, so there is still time to see it yourself, but for those who cannot get there, I thought I'd take this opportunity to detail this fascinating set of caricatures, as I was very sorry not to be able to find more information on it when I returned from my first viewing.

I can't find a complete picture of this rather bizarre scroll, but at it is not the artwork but the captions I find so interesting, perhaps this matters little. I did not transcribe it in its entirely, but I did pick out a few snippets to share, either for their humor or the familiarity of the persons represented. I will present them from left to right, beginning with the first that struck my particular interest. The bold type is the identification provided by Dighton.


A Good Whip
William Phillip Molynaux, 2nd Earl of Sefton certainly was a notable whip. As one of the founders of the Four-Horse club, he might well have been the basis for many of Georgette Heyer's "Corinthians". His wife was one of the founders of Almacks. A politician, perhaps his most memorable contribution to public life was his opposition to the railroad, so we'll remember him for driving through town at a reckless place with four horses instead.

An Indian Lake, Lord Lake
This is humorous because Francis Gerard Lake's father received the title Viscount for his service in India as Commander-in-Chief of the British forces. The 2nd Viscount Lake does not seem to have similarly distinguished himself, but we may assume by his presence here that he enjoyed the profits of his father's toil.

A Favorite Poodle
The Hon. Frederick Gerald Byng (I found a few mistakes by the RISD curator, and one was misidentifying him as George Byng, 2nd Earl of Strafford, another was listing Almack's as a gentlemen's club), was named "Poodle" Byng by Beau Brummell himself, who was mocking the dog that constantly accompanied his friend. A member of the "Bow Window Set" at White's, this caption probably mocks his status as a close associate of George IV, whom he served as page. The gentlemen is credited with improving London's sanitation system.

Kang = Kook
I can't find much information on Colonel H.F. Cooke, but I'm dying to know what this caption references. If anyone can explain Kang = Kook to me, I'd be ever so grateful. 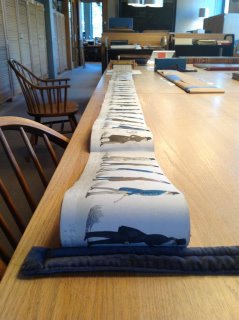 (skip ahead a few)

New = Gent, Lord M_____
This one poses another mystery. Presumably the man pictured was recently elevated to his status as lord whatever he was (Mumford?). If anyone can enlighten me, I'm all ears.

The Golden Ball, Ball Hughes
No mystery here. Ball Hughes is one of those famous dandy's who gambled and caroused his way through an enormous fortune until he had to move to France, where one could live more cheaply. Although I saw no specific mention of his contributions to fashion in the exhibit, he is credited with inventing the black cravat, which one would think would be worth noting. Look for him in Heyer's Sylvester.

Best Blood & Bottom of Westmorland
Totally unidentified, but as I believe Westmorland was known for hunting, the gentlemen must have been quite the Corinthian (if these terms have little meaning for you, please read more Heyer).


Lord Yarmouth, A View from Yarmouth to Hertfordshire
I was super excited to see Francis Seymour-Conway, 3rd Marquess of Hertford and Earl of Yarmouth pictured, as I have a print of his mother's picture (one of the Regent's many mistresses) hanging in my living room. The inscription indicates the extent of his power and influence. He was a considerable art collector, so it makes sense that he's now part of a collection.

A Welch Castle
I don't quite get this one, for it is identified as Lord Gwydyr, and despite the hard to pronounce name I can find no indication that he was at all associated with Wales. Maybe one of you can help? What is of interest for Janeites is his full name, for Peter Drummund-Burrell was also the 22nd Baron Willoughby de Eresby.

The Best Store in the Ordnance


-          The most well-know personage is none other than Arthur Wellesley, 1st Duke of Wellington. I think no further explanation is require.

A Princely Ambassador
-         Prince Paul III Anton Esterhazy is another character familiar from Heyer, as his wife was one of Almack's most famous patronesses. He was a prince and the ambassador from Austria. Go figure.

(One last leap to the section pictured below)

A Character in the School of Reform
-          John Cam Hobhouse, 1st Baron Broughton is one for the literary buffs, as the forth Canto of Childe Harold is dedicated to him. After traveling with his buddy Byron through Europe for several years, he began a career as Radical reformer, for which he is best known.

Catullus
-         George Lamb did a translation of Catullus' poems into English, but he's mostly interesting in the modern world as the little brother of William Lamb and husband of the Duke of Devonshire and Lady Elizabeth Foster's illegitimate daughter.

A Spice of Pepper from the Stick of Arden
-         William Arden, 2nd Baron Alvanley, as in "Alvanley, who's your fat friend?", which has to be the most famous cut of all time, having lost Beau Brummell his place in the Regent's circles. The Baron was another infamous dandy to plow through the family money, but he must have been a lot of fun to party with in his heyday, while I believe the rest of his family was of a more serious bent (his brother was a friend of William Wilberforce).

One of the Rakes of London
-          Thomas Raikes was a famous dandy and diarist. The artist's willingness to make a rather insulting pun upon the name Raike might be a liberty premised in its mercantile roots. I'm pretty sure this gentlemen makes his appearance in Heyer, too, but I can't figure out where. 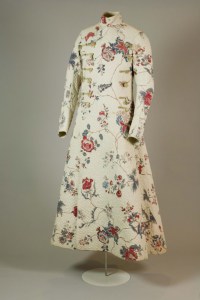 I had so much fun studying this! Any information a reader might wish to contribute to further this deciphering of an iconic image would be wonderful. I'm sorry I couldn't do the entire scroll, but there were others waiting on me.

One last highlight of the exhibit I failed to mention in the last post: this magnificent banyan worn by the Prince Regent in his thinner days is included. If you can get there, go visit the RISD Museum before August 18th. While in providence be sure not to miss the Athenaeum Library on Bennet St. That place is magical.
Posted by Alexa Adams at 9:00 AM