The Book is Done! Plus a Review of Bluebells in the Mourning by KaraLynne Mackrory 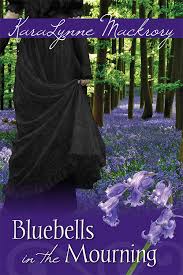 Sorry to usurp a review I should have written a month ago, when I first finished the book, but I just finished Holidays at Pemberley, or Third Encounters: A Tale of Less Pride & Prejudice Concludes! My interests may have never been so much in conflict before, but it is time to celebrate, nonetheless (well, almost: I still need to process the comments of my mother, sister, and mother-in-law, who really do a marvelous job cleaning up after this extremely careless writer). This book is a journey begun less than a year ago when I spontaneously decided to sign up for NaNoWriMo on November 1st, in response to the need to do something for Charlotte Lucas. I had no notion it would turn into a Christmas story, but I'm very pleased with the results. It wraps up the fates of all my other re-imagined Pride & Prejudice characters with particular focus on the Darcys and, to a lesser extent, the Wickhams. I hope it is as satisfying to those who have been following my tale as it is to me. Now I'm ready to move on, and I have something in mind for this year's NaNoWriMo. More to come on that this fall.

Now let's turn our attention to a book is certain to delight the reader: Bluebells in the Mourning by KaraLynne Mackrory. I bought this novel after reading a wonderful review of it at Austenesque Reviews, which does a far better job than I am about to do summarizing the plot (check it out here). The story has a bit of something for every Janeite (except for explicit sex scenes - thank you Ms. Mackrory!): desperate misunderstandings between Darcy and Elizabeth, beautiful development of side characters, especially Georgiana, mysteries to unravel, and a thoroughly despicable Wickham in need of defeat, which as an added bonus brings us into the depths of the 19th century London's underworld ...


He was disgusted with his surrounding - and even more so with the lack of punctuality of the person whom he was to meet - and Darcy's mood was taking a decided turn south. He dared not touch the soiled tablecloth covering the wobbly table in front of him. He had barely summoned the courage to order a glass of brandy from the grubby looking bar maid; her suggestive propositions and unwashed odors were making him ill. Where is that blasted man?

After eyeing the glass suspiciously and reminding himself why he must bear these mortifications, he tentatively took a sip of his drink. Upon his arrival at Netherfield, Darcy had sent his valet to gather information about Wickham or his whereabouts from within the exclusive, secretive world of the servant class. Some hard-earned confidences led Darcy to this fetid part of London.


Wickham nodded and straightened to his full height. He turned to the barkeep and said he would want a bottle sent to the table.

"What'll ya be drinkin' this time, Wick?"

He tendered a mischevious grin. "The regular for me, and a bit of your blue ruin for the chaps."

Wickham tapped the bar and walked over to the table with the officers just as Jem placed his winning cards on the stack. Wickham reached for the man's arm and lifted it up, pulling out the extra cards he knew the man kept hidden in his sleeve.

"I suppose these cards just fell into your coat, eh, Jem?"

As a readaptation of Pride & Prejudice, my favorite thing about Bluebells in the Mourning is the joyfulness of the story. Almost everyone finds an even happier fate that Austen provided, except for Lydia, who is dead. That's the the story's premise: What if Lydia Bennet conveniently fell off Oakham Mount while Elizabeth is at Hunsford, but before Mr. Darcy can make his first proposal? I felt kind of guilty reading about how everything could work out so well if only poor Lydia were disposed of, but it really does allow the Bennet family to become far less dysfunctional. She is rather a nuisance, I get it, but I can't help but feel a little uneasy about that part of the premise. It's my only complaint of the book, which provides a lovely reading experience. This is the kind of novel that is perfect for those readers of Austenesque who approach with caution, as it remains true to Austen's time and spirit throughout. Brava!

This is my seventh review for The Pride & Prejudice Bicentennial Celebration 2013, hosted by Austenprose. Check out my others below: