The greatest gift I received this holiday season was the ability to read two entire books. Yes - two whole books. Reading only one book cover to cover is a luxury I have not enjoyed since the birth of my daughter. When I have read, it has been piecemeal: a paragraph here and there, over a span of several weeks, maybe months. As I cannot bear to continue reading so little. My soul requires it, and hopefully participation in The Pride and Prejudice Bicentenary Challenge will help me reclaim this vital part of my self. 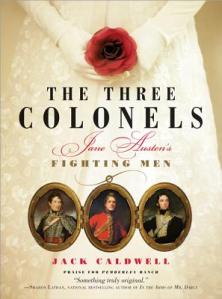 Writing reviews, on the other hand, is not intricate to my well-being, and knowing my best reviews are those I write immediately after finishing a book, I feel pretty guilty that it has taken so long for me to find the opportunity to record my thoughts on The Three Colonels by Jack Caldwell, for I know I will not do not justice.  I enjoyed Pemberley Ranch (read my review here) when I was pregnant, and eagerly looked forward to more of Mr. Caldwell's distinctly masculine adaptations of Austen's works. The Three Colonels in no way disappoints. On the contrary, I think I enjoyed it even more than it's predecessor.

This is a novel of Austen's army men - Colonel Fitzwilliam, Colonel Brandon, and Lieutenant Wickham - continuing their stories through Wellington's victory over Napoleon at Waterloo. Boney's presence looms large over the novel, providing a foundation for Mr. Caldwell to build his romance. Colonel Brandon and Marianne have a new family, Colonel Fitzwilliam and Anne de Bourgh are newly engaged, and an original character, Colonel Buford, serves as our newlywed. The name of the bride? Caroline Bingley.

I've read other redemption novels for Caroline Bingley and have always enjoyed them. There are parts of Mr. Caldwell's explanation of Caroline's improvement that I find unbelievable, but the creature he turns her into is magnificent. Colonel Buford equals her force, and their romance drives the first half of the book, until this abrupt interruption:


It was the middle of the night when Caroline awoke. The knock on her door and her husband arising to answer it had broken her slumber. She opened on eye slightly to see Sir John in a robe reading a letter by the fireplace. The stiffness in his posture caught her attention. Completely awake, she sat up in bed, the sheet falling away from her naked torso.

He turned to her, backlit by the fire, his expression unreadable.

"Bonaparte has escaped from Elba."

The three heroes convene in Belgium, Mr. Wickham in grudging tow, and their ladies must do their best in the absence of their gentlemen. Mr. Caldwell's depiction of their struggles at home, the complications involved in maintaining communication through the labyrinth of military bureaucracy, and the despair of the battlefield hold the reader's complete attention:


For two hours, the attacks came and came. Wickham lost count after ten. The crack of muskets and the roar of cannon fore had deafened him. It was good fortune, for he could hardly make out the screams and moans of wounded men and horses. All about him were dead and dying british soldiers; they had no time to evacuate them to the rear. Every time Wickham caught his breath, the French charged again.

Georgette Heyer fans will perceive echoes of An Infamous Army (which I discussed in my post "The Duke of Avon and his Descendants"), particularly in moments like the above where the battlefield is vividly depicted. I was grateful that Mr. Caldwell referenced this epic account of Waterloo in his suggested reading list at the end of his novel, for as I read The Three Colonels, I kept wondering out loud if the author was a Heyer fan. How gratifying to be right! Mr. Caldwell has once again beautifully blended grit and sweat into Austen's genteel world, and he does it all without sacrificing the view. I would recommend this book to Janeites and history buffs alike. Bravo!

This post is my first offering to The Pride and Prejudice Bicentenary Challenge. More to come!
Posted by Alexa Adams at 3:01 PM