Pride and Prejduice Readathon: Chapters Thirty-five and Thirty-six (The Letter)

These chapters must be compared side by side, as thirty-five contains Mr. Darcy's letter, and thirty-six is all Elizabeth's response to it. Though my head is starting to feel enough of the effects of exhaustion that I cannot provide the depth of analysis this moment in the book deserves, I will at least attempt to capture the highlights.

Darcy's letter begins in much more anger than it ends. His tone noticeably changes when he begins to write of Georgiana, somewhere around here: " I must now mention a circumstance which I would wish to forget myself, and which no obligation less than the present should induce me to unfold to any human being. Having said thus much, I feel no doubt of your secrecy." Gone is all his defensive posture, and he treats Elizabeth as a most trusted confidant. It is this part of the letter that turns her anger, too, as she comes to comprehend the truth of Wickham's character.

As packed with plot development and emotional intensity as these two chapters are, the most important points emphasized throughout both, and two of the most persistent themes in Austen, are the dangers of judging others based on appearance and prejudice, and the importance of being honest to yourself. Elizabeth asks herself what made her trust Wickham, even when his actions and words proved inconsistent:


As to his real character, had information been in her power, she had never felt a wish of enquiring. His countenance, voice, and manner had established him at once in the possession of every virtue. She tried to recollect some instance of goodness, some distinguished trait of integrity or benevolence, that might rescue him from the attacks of Mr. Darcy; or at least, by the predominance of virtue, atone for those casual errors, under which she would endeavour to class what Mr. Darcy had described as the idleness and vice of many years continuance. But no such recollection befriended her. She could see him instantly before her, in every charm of air and address; but she could remember no more substantial good than the general approbation of the neighbourhood, and the regard which his social powers had gained him in the mess.

She turns to self-rebuke, and rightly deserved, too, but every Austen heroine must go through such a moment of painful mortification, and Elizabeth, once her eyes are opened, is quicker than some to learn from her own folly: 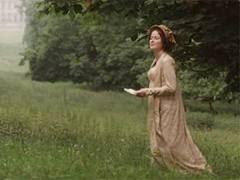 She grew absolutely ashamed of herself. -- Of neither Darcy nor Wickham could she think, without feeling that she had been blind, partial, prejudiced, absurd.


"How despicably have I acted!" she cried. -- "I, who have prided myself on my discernment! -- I, who have valued myself on my abilities! who have often disdained the generous candour of my sister, and gratified my vanity, in useless or blameable distrust. -- How humiliating is this discovery! -- Yet, how just a humiliation! -- Had I been in love, I could not have been more wretchedly blind. But vanity, not love, has been my folly. -- Pleased with the preference of one, and offended by the neglect of the other, on the very beginning of our acquaintance, I have courted prepossession and ignorance, and driven reason away, where either were concerned. Till this moment, I never knew myself."

This is the great turning point in the book, after which Elizabeth begins to judge Darcy and Wickham properly. It is also here that Darcy begins a similar process of self-evaluation, but we know nothing of it until later in the plot. The letter itself demonstrates little change in his feelings but an abatement of resentment. He is not yet able to acknowledge the justice in some of Elizabeth's criticisms, only addressing her grand accusations. That he already shows remorse for being mistaken in Jane's affections, and for keeping her presence in London from Bingley, indicates his ability for further reform.

This moment in the book seems particularly difficult to translate onto screen. I like Andrew Davies attempt best. http://youtu.be/tHNwtGBbODg
Posted by Alexa Adams at 2:18 PM