As I said in my last post, the end of volume one is depressing. Volume two begins with a very negative Elizabeth, and Jane scold her into better feelings. It is a scene which I have often found inspirational, when my sentiments have corresponded to those Elizabeth expresses:


"Nay," said Elizabeth, "this is not fair. You wish to think all the world respectable, and are hurt if I speak ill of any body. I only want to think you perfect, and you set yourself against it. Do not be afraid of my running into any excess, of my encroaching on your privilege of universal good will. You need not. There are few people whom I really love, and still fewer of whom I think well. The more I see of the world, the more am I dissatisfied with it; and every day confirms my belief of the inconsistency of all human characters, and of the little dependence that can be placed on the appearance of either merit or sense. I have met with two instances lately; one I will not mention; the other is Charlotte's marriage. It is unaccountable! in every view it is unaccountable!"

"My dear Lizzy, do not give way to such feelings as these. They will ruin your happiness. You do not make allowance enough for difference of situation and temper. Consider Mr. Collins's respectability, and Charlotte's prudent, steady character. Remember that she is one of a large family; that as to fortune, it is a most eligible match; and be ready to believe, for every body's sake, that she may feel something like regard and esteem for our cousin."

"To oblige you, I would try to believe almost any thing, but no one else could be benefited by such a belief as this; for were I persuaded that Charlotte had any regard for him, I should only think worse of her understanding, than I now do of her heart. My dear Jane, Mr. Collins is a conceited, pompous, narrow-minded, silly man; you know he is, as well as I do; and you must feel, as well as I do, that the woman who marries him, cannot have a proper way of thinking. You shall not defend her, though it is Charlotte Lucas. You shall not, for the sake of one individual, change the meaning of principle and integrity, nor endeavour to persuade yourself or me that selfishness is prudence, and insensibility of danger, security for happiness."

"I must think your language too strong in speaking of both," replied Jane, "and I hope you will be convinced of it, by seeing them happy together." 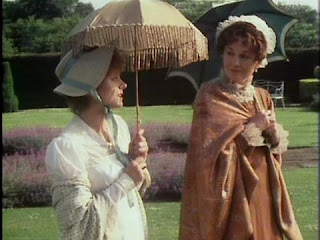 One of the reasons why Austen's novels are so enduring is because of the guidance they provide the receptive reader, and these chapters are full of lessons in coping with dissapointment. Elizabeth is greatly assisted by the arrival of the Gardiners. In her aunt's example, we finally see where Jane and Elizabeth acquired their superior manners, and it is very apropos that Mr. Wickham's unsuitability should become her focus. In contrast to Mrs. Gardiner's pragmatic reasoning (which echoes Charlotte's more than what we have thus far seen from Elizabeth), the teasing advise Mr. Bennet gives Elizabeth regarding being jilted by Mr. Wickham at the end of chapter twenty-four appears almost sinister. Elizabeth acknowledges the wisdom of Mrs. Gardiner's counsel over her father's when she write of Wickham's defection in favor of Mary King: "My watchfulness has been effectual; and though I should certainly be a more interesting object to all my acquaintance, were I distractedly in love with him, I cannot say that I regret my comparative insignificance." Her tone echoes his playfulness, but the sentiments are her aunts.

These first chapters of volume two establish this new faze of the book, where a great dela of the action will occur away from Hertfordshire. Jane is already dispatched to London and disabused of Miss  Bingley's affection, Elizabeth has promised to visit Hunsford. As the Gardiners play an essential role in facilitating the ladies' ability to travel throughout the book, it is fitting that they are introduced at this juncture.
Posted by Alexa Adams at 9:50 AM