Wave goodbye to the disagreeable Wickhams, and good riddance! Now is the time for far more gratifying topics. Chapters firty-three through fifty-five see the return of Mr. Bingley to Netherfield, and the culmination of his and Jane's long courtship. Generally, Bingley's return ushers in a new wave of good times at Longbourn, and we return to the atmosphere of cheerful domesticity with which the book begins. Even the dialogue of the first chapter is invoked:


"Yet it is hard," she sometimes thought, "that this poor man cannot come to a house which he has legally hired, without raising all this speculation! I will leave him to himself."

In spite of what her sister declared, and really believed to be her feelings in the expectation of his arrival, Elizabeth could easily perceive that her spirits were affected by it. They were more disturbed, more unequal, than she had often seen them.

The subject which had been so warmly canvassed between their parents, about a twelvemonth ago, was now brought forward again.

"As soon as ever Mr. Bingley comes, my dear," said Mrs. Bennet, "you will wait on him of course."

"No, no. You forced me into visiting him last year, and promised, if I went to see him, he should marry one of my daughters. But it ended in nothing, and I will not be sent on a fool's errand again."

Mr. Benet remains sarcastic, and Mrs. Bennet a nuisance, but their eccentricities now regain some charm, while over the bulk of this volume, a sinister atmosphere has reigned at Longbourn.

These chapters draw the reader's attention to just how difficult communication was between single men and women in this society. Miss Lucas' early strictures on the importance of a lady making her affection known take on greater resonance as we watch Darcy and Elizabeth struggle to understand one another. Along with this tension, their is still a good deal of mortification for our heroine to endure:


"It is a delightful thing, to be sure, to have a daughter well married," continued her mother, "but at the same time, Mr. Bingley, it is very hard to have her taken such a way from me. They are gone down to Newcastle, a place quite northward, it seems, and there they are to stay I do not know how long. His regiment is there; for I suppose you have heard of his leaving the ----shire, and of his being gone into the regulars. Thank Heaven! he has some friends, though perhaps not so many as he deserves."

Elizabeth, who knew this to be levelled at Mr. Darcy, was in such misery of shame, that she could hardly keep her seat. It drew from her, however, the exertion of speaking, which nothing else had so effectually done before; and she asked Bingley whether he meant to make any stay in the country at present. A few weeks, he believed.

"When you have killed all your own birds, Mr. Bingley," said her mother, "I beg you will come here, and shoot as many as you please on Mr. Bennet's manor. I am sure he will be vastly happy to oblige you, and will save all the best of the covies for you."

Elizabeth's misery increased, at such unnecessary, such officious attention! Were the same fair prospect to arise at present as had flattered them a year ago, every thing, she was persuaded, would be hastening to the same vexatious conclusion. At that instant, she felt that years of happiness could not make Jane or herself amends for moments of such painful confusion.

"The first wish of my heart," said she to herself, "is never more to be in company with either of them. Their society can afford no pleasure that will atone for such wretchedness as this! Let me never see either one or the other again!" 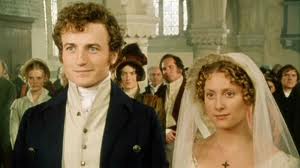 Chapter fifty-four is totally dedicated to illustrating Elizabeth's difficulty in interpreting Mr. Darcy's intentions, and fifty-five sees Mr. Bingley and Jane engaged. The latter utters some of Austen's more memorable quotes in her happiness. Of course, Lizzy is not to be outdone:


"I am certainly the most fortunate creature that ever existed!" cried Jane. "Oh! Lizzy, why am I thus singled from my family, and blessed above them all! If I could but see you as happy! If there were but such another man for you!"

"If you were to give me forty such men, I never could be so happy as you. Till I have your disposition, your goodness, I never can have your happiness. No, no, let me shift for myself; and, perhaps, if I have very good luck, I may meet with another Mr. Collins in time."