Now we enter the broader society of Meryton and meet our hero. As Mr. Darcy has been the recipient of a great deal of my attention on other occasions, I'm going to overlook him (just for the moment) and focus on some of the more subtle triumphs in these chapters. First of all, I absolutely love, love, love how the Bennet ladies get their first description of Mr. Bingley:


Not all that Mrs. Bennet, however, with the assistance of her five daughters, could ask on the subject was sufficient to draw from her husband any satisfactory description of Mr. Bingley. They attacked him in various ways; with barefaced questions, ingenious suppositions, and distant surmises; but he eluded the skill of them all; and they were at last obliged to accept the second-hand intelligence of their neighbour Lady Lucas. Her report was highly favourable. Sir William had been delighted with him.

To have to rely on Sir William Lucas for a description of a young man! It reminds me of the scene in Sense and Sensibility where Marianne questions Sir John on Willoughby. It is not until the beginning of chapter five that Austen expounds on the knight's character, and at the time the true folly in relying upon his assessment become clear.  However, let it be noted that Sir William is actually fairly dependable in this one instance, and his description must be of more use to the ladies in forming an opinion of Mr. Bingley than what they can surmise by the color of his coat, no matter how fashionable blue might be (if you are interested in mens fashion of the period, do read up on Beau Brummel - fascinating stuff). 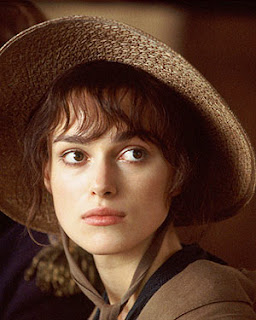 It is not until chapter four that the characters of our most important players are really introduced. We have already been able to surmise something about Elizabeth, Bingley, and Darcy already (regarding Jane we have learned little more than that she is beautiful), but it is here that Austen truly lays out their dispositions. I love how she creates a contrast between the discussion at Longbourn between Jane and Elizabeth verses that at Netherfield. In the brilliant dialog at Longbourn, Elizabeth first spoken words in the text  reveal her as her father's true daughter, and Jane's sweetness becomes instantly apparent:


"He is just what a young man ought to be," said she, "sensible, good humored, lively; and I never saw such happy manners! -- so much ease, with such perfect good breeding!"

"He is also handsome," replied Elizabeth, "which a young man ought likewise to be, if he possibly can. His character is thereby complete."

"I was very much flattered by his asking me to dance a second time. I did not expect such a compliment."

"Did not you? I did for you. But that is one great difference between us. Compliments always take you by surprise, and me never. What could be more natural than his asking you again? He could not help seeing that you were about five times as pretty as every other women in the room. No thanks to his gallantry for that. Well, he certainly is very agreeable, and I give you leave to like him. You have liked many a stupider person."

Austen is particularly brilliant at using dialog to illustrate character. I do wish that she had let us hear the conversation at Netherfield, rather than just summarizing it.

So short on time if I am to stay on schedule! I'll conclude by pointing out how chapter five fully exposes Mrs. Bennet's weaknesses. First she proves the hypocrite with Miss Lucas, pretending to not be glorying in Mr. Bingley's preference for Jane, and then she uses improper English - always a sign of character flaw in Austen: " every body says that he is ate up with pride". But my favorite is how this chapter ends, asthe mother of five grown daughters squabbles with a little boy: 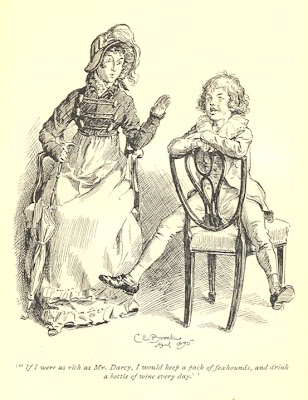 "If I were as rich as Mr. Darcy," cried a young Lucas who came with his sisters, "I should not care how proud I was. I would keep a pack of foxhounds, and drink a bottle of wine every day."

"Then you would drink a great deal more than you ought," said Mrs. Bennet; "and if I were to see you at it, I should take away your bottle directly."

The boy protested that she should not; she continued to declare that she would, and the argument ended only with the visit.

How ridiculous! I love moments like this in Austen, and I think this image by C.E. Brock (borrowed from mollands.net) captures it beautifully.

Oh! I almost forgot to say something about upward mobility, and how these chapters reveal the ways in which a family increased their standing in the world. I have not time to comment on it, but two moments are particularly revealing. This from chapter four:

Mr. Bingley inherited property to the amount of nearly an hundred thousand pounds from his father, who had intended to purchase an estate, but did not live to do it. -- Mr. Bingley intended it likewise, and sometimes made choice of his county; but as he was now provided with a good house and the liberty of a manor, it was doubtful to many of those who best knew the easiness of his temper, whether he might not spend the remainder of his days at Netherfield, and leave the next generation to purchase.


His sisters were very anxious for his having an estate of his own; but though he was now established only as a tenant, Miss Bingley was by no means unwilling to preside at his table, nor was Mrs. Hurst, who had married a man of more fashion than fortune, less disposed to consider his house as her home when it suited her. Mr. Bingley had not been of age two years, when he was tempted by an accidental recommendation to look at Netherfield House. He did look at it and into it for half an hour, was pleased with the situation and the principal rooms, satisfied with what the owner said in its praise, and took it immediately.

And this from the beginning of chapter five:


Sir William Lucas had been formerly in trade in Meryton, where he had made a tolerable fortune and risen to the honour of knighthood by an address to the King during his mayoralty. The distinction had perhaps been felt too strongly. It had given him a disgust to his business and to his residence in a small market town; and quitting them both, he had removed with his family to a house about a mile from Meryton, denominated from that period Lucas Lodge, where he could think with pleasure of his own importance, and, unshackled by business, occupy himself solely in being civil to all the world.

Oh again! This on gossip from chapter three: "Lady Lucas quieted her fears a little by starting the idea of his being gone to London only to get a large party for the ball; and a report soon followed that Mr. Bingley was to bring twelve ladies and seven gentlemen with him to the assembly."