A whole lot happens in chapter six, which begins by establishing vital themes in the novel. Charlotte Lucas first hints at the problems that will arise from Jane's cool temperament, even while Elizabeth lauds the same quality, and then reveals her own very pragmatic approach to marriage. Modern audiences deride Miss Lucas as unfeeling, or at least terribly unromantic, but to contemporary readers, it must have been Elizabeth's notions that seemed sadly mistaken. This becomes increasingly clear at the beginning of chapter seven, when the Bennet's financial and social circumstances are revealed.

Chapter six also establishes many of the flaws in Elizabet's character. Her sometimes clouded judgement of others is hinted when she laughs off Charlotte's pragmatic approach to marriage: "You make me laugh, Charlotte; but it is not sound. You know it is not sound, and that you would never act in this way yourself." She also shows how blind she is regarding her own actions and feelings, particularly when she teases Mr. Darcy in a blatantly flirtatious manner without regard to the consequences. It is ironic what Charlotte has just finished saying: "In nine cases out of ten, a woman had better shew more affection than she feels." Elizabeth does just that, and it is no wonder Mr. Darcy mistakes her opinion of him. 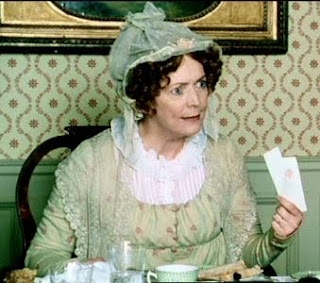 I'm running behind, and there is still so much to say! Chapter seven brings the Bennet ladies to Nethefield, and Mrs. Bennet amply demonstrates the harm idiocy can inflict upon  others. More irony abounds, as Mr. Bennet has just finished deriding the senses of his two youngest, to which his wife replies: "My dear Mr. Bennet, you must not expect such girls to have the sense of their father and mother. Tragic though her foolishness may be, I do love this scene:


She did at last extort from her father an acknowledgment that the horses were engaged. Jane was therefore obliged to go on horseback, and her mother attended her to the door with many cheerful prognostics of a bad day. Her hopes were answered; Jane had not been gone long before it rained hard. Her sisters were uneasy for her, but her mother was delighted. The rain continued the whole evening without intermission; Jane certainly could not come back.

"This was a lucky idea of mine, indeed!" said Mrs. Bennet, more than once, as if the credit of making it rain were all her own. Till the next morning, however, she was not aware of all the felicity of her contrivance.

It's moments like this that makes me think those who find no pleasure in Austen are intolerably stupid.
Posted by Alexa Adams at 3:00 AM