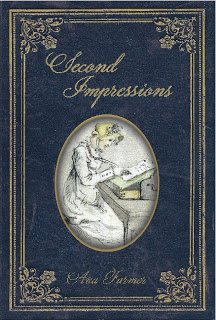 It has been too long since I have written a review, for no reason other than having virtually no time to read anymore. However, I was able to slowly plow myself through the Pride and Prejudice sequel Second Impressions by Ava Farmer (the nom de plume of the very impressive Sandy Lerner). This unusual sequel reads more like a Victorian travel log than an Austenesque novel, with a few subplots interwoven, often involving characters known to us from some of Austen's other works, particularly Persuasion. While it is not what I would recommend to those looking for spicy romance (which, quite frankly, isn't really my favorite thing anyway), for history buffs this novel is remarkable, Ms. Farmer capturing the aspect and tone of a 19th century travelogue in a truly uncanny manner.

I do not know the conditions of travel on the European continent in the post-Napoleonic era well enough to fact check Ms. Farmer's descriptions without a degree of effort which my limited time in no way permits, but she writes with the authority of one who was there, enduring the treacherous climb through the alps and the dirt and bugs of Italy first hand. The novel takes place roughly ten years after the Darcys married. They remain childless, and Georgiana, single. The three employ their free time in journeying throughout the kingdom until the end of war opens the Continent to their explorations. The detailed descriptions of their journey are remarkable and compose the bulk of the book:


The weather had turned fully into spring during their travel southward, and the houses and villas began to assume a more Italian appearance. Mr. Darcy noted with approval that, in these steep fields, mules were used to the plough, instead of cows. The cattle now deviated from the all-white cattle of the Charolais, appearing in every shade between black and white, all grazing amidst good pasturage, or standing contentedly by the gates awaiting milking-time. Woods began to overtake tilled fields as the countryside was become increasingly mountainous. The road continued increasingly steep until they reached the summit at Eschelles, a small village that looked as though it would be at any minute swallowed-up by the surrounding mountains. There, it was customary to add two horses to the larger carriages, but none were at liberty, and so an ox was added to each of the carriages before continuing through the mountains. Mr. Darcy and Mr. Harmon were content with the arrangement, noting that, whist the horse was faster than an ox, and that their carriages were considerably lighter - even under their great burthens of baggage - than were the French coaches, one ox did more work than a pair of horses.Both praised the tempers of the great English horses as being of a nature to endure being yoked with oxen, if necessary, whilst the lighter carriage horses would have reacted violently to the cattle in such close proximity; Elizabeth opining that it was the natural effect of the great conceit of the blood-horses, and the mortification they would feel if harnessed to cows. Mr. Darcy and Mr. Harmon re-inspected the under-carriages and made sure that the footmen were alert to drop the drag-irons in a moment, whenever they were wanted.

The road was very good, demonstrating another side of Buonaparte's genius, but the terrain would not admit of a moment's inattention to prevent catastrophe. Just after passing the border, the family came upon an accident which had just then occurred: an heavy coach had been proceeding down one of the steep declinations, when the tattered ropes had suddenly broken, causing a wheel-horse to fall, and the two leaders to scramble to freedom. The carriage had been stopt by the fallen horse, which, surprisingly, seemed to have escaped with only minor injury. By the times the Darcys' carriage had pulled up, one of the postillions was returning up the road with the wayward horses. Mr. Harmon (assisted by Mr. Darcy) asked if they needed any harness-pieces. To Mr. Darcy's surprise, and the utter indignation of Mr. Harmon, the coachman of the other carriage thanked them for their offer, but replied that this was a customary occurence, and he had plenty of rope with which to make another knot!

At regular intervals the ruined skeletons of all manner of carriages could be seen, having fallen off of the road-side, some with their shafts pointed directly at the powerful current of the Rhone, causing Georgiana to reflect with sadness as she imagined the fate of the horses which had been bound to the shafts. Gratefully, the Darcys reached Chambery without further incident. Chambery was the capital of the Savoy and the former residence of Rousseau, where it was still possible to see where he lived so openly and disgracefully with his mistress, M. de Varennes. As they arrived at the ancient capital, it became clear why there was a business in over-charging the English visitors, for at the placed joined the roads to Torino, Marseille, and Geneva. It seemed the very crossroads of England, so many English were there, going to one place or another, coming, staying, eating, shopping, and every other activity possible in such a confined place. Their inn was unsatisfactory, and upon entering their rooms for the night, Elizabeth made a comment to the effect that, by this point in their journey, a clean inn was certainly more remarkable than otherwise. They were all become so inured to the French stile of house-keeping, that there was certainly no advantage in dwelling upon so common-place an inconvenience.

The English superiority, the bucolic detail, and the strange syntax (beautifully defended by Ms. Farmer in her Epilogue: "Language to Austen was a tool, an art form, and a medium, not an artifact of a rigidly defined set of rules.") all combine to make the text almost indistinguishable from a primary source, and if the actor's names had not been Darcy and Elizabeth, I would have been in danger of forgetting that I was reading a modern text. The depth and breadth of the author's historical knowledge astounds me, and I have never read an Austenesque novel so scholastically impressive.

This being said, the non-historical aspect of the book - the actual Pride and Prejudice sequel - falls short of expectations. Absent is almost everything "bright and sparkling". unless you can find joy in bludgeoning Lady Catherine into submission. I have read other continuations whose authors revenge themselves on those characters most despised, usually Lady Catherine or Caroline Bingley, and it is not to my taste, much preferring books in which Austen's villains (and her idiots) find redemption. I do not want to give away too much of this subplot, but the basic premise is Lady Catherine, desperate to retain her control of Rosings, journeys to Bath in order to find a malleable husband for Anne. Instead she meets Sir William Elliot and falls victim to his machinations. The most unique aspect of this account is Ms. Farmer's portrayal of Anne de Bourgh as thoroughly unlikable. I found the entire episode depressing, but it is vitally necessary to the first volume, before the Darcys depart for the continent, for without the intrigues of Bath I do not think I could have endured beyond the first few chapters, which provide a muddled chronology, bouncing from one time period to the next in a rather bewildering manner before settling into the story.

Ms. Farmer also incorporates Mansfield Park into her tale, reserving for Mary Crawford a depiction even less sympathetic than Lady Catherine's as the romantic interest of Colonel Fitzwilliam. He is delayed by her from joining the Darcy's on their tour, opening the door for one my favorite parts of the book. While the Darcys sojourn in Paris, they are fortunate in the companionship of the Comte d'Estrouville, a leader of French society and its only member to whom they feel the slightest affinity. The Comte proves remarkably English in his manners and values, and combined with a surprising likeness to Mr. Darcy, the reader is agog with supposition regarding their possible kinship. Ms. Farmer does much to flame the suspense, including taking our heroes on a futile search for Darcy's ancestry in a different region, but she never brings resolution to the question. This is the most glaring of many bizarre omissions in the twists and turns that make up the plot of Second Impressions.

Though the book begins: "A period of ten years' time brings many changes ... ", the chronology is not nearly as clear as that opening implies, and I never was able to reconcile Ms. Farmer's accounts of the different characters without bending time and space. One might claim that such lack of consistency adds to the authentic feel of the the book, and there is much truth in that defense, but there is also a good reason why more people still read Dickens than Haggard. Quite frankly, those novels which Ms. Farmer's most resembles are not the more celebrated of the era. However, though the triumph of this book is not one of fiction, it is a literary triumph nevertheless. It really resembles something more akin to a historical reenactment than a novel, rendering the book totally unique, both in intention and tone, and incomparable to anything I have previously read. I remain in awe of Ms. Farmer's accomplishment.

Note: If my review has left you uncertain whether a copy of this rather expensive volume is essential to your Austeneque library, please be advised that the proceeds from this book support the Chawton House Library, and that it is a very handsome hardback, certain to grace your bookshelf most elegantly.
Posted by Alexa Adams at 11:51 AM