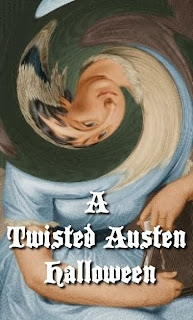 Those of you who read last week's post on the Northanger Abbey themed cards I made may recall the issues I had finding frightening quotes to feature, even in Austen's gothic parody. On further consideration, I came to much the same conclusion as that which inspired this entire Twisted Austen endeavor: it is not ghosts and ghouls that Jane found terrifying, but moral deficiency and failing. The most harrowing moments in Austen's novels are not fantastic. Instead they are very realistic depictions of the foibles and cruelties of humans inflict on themselves and others. These are the themes I explored in Emma & Elton: Something Truly Horrid last year, and even more so in this year's story, Jane & Bingley: Something Slightly Unsettling. With these thoughts in mind, I decided to make a second set of Halloween cards for giveaway during Twisted Austen, highlighting some of the more harrowing moments in Austen. Both sets of cards were made using Martha Stewart halloween stencils, which I happened to find on sale at Michaels (a great buy! I've been using them for all kinds of seasonal projects with my daughter as well), and some of the cards in this second set turned out rather witty, if I may say so myself. I selected the stencils used to provide a bit of commentary on the quotes featured, a fact which I hope is readily apparent to all. For example, I quote Fanny Dashwood's objections to providing Mrs. Dashwood an annuity and adorned the card with a skull and crossbones. Get it? I'd love to hear your thoughts on them:

The pile of swag is building up. I am going to do a giveaway each of the eight days of the event, with a grand prize on the last day (Halloween), featuring a selection of all the goodies I've made for the occasion, along with a complete set of my Tales of Less Pride & Prejudice series. I hope you will all join in the fun!