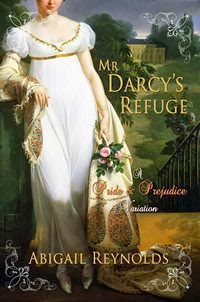 My husband was sent at the last minute to Oracle Open World last week in San Francisco, and I, also last minute, decided to join him. It was the longest I have ever been away from my daughter, and while I missed her intensely, it was beautifully luxurious to have no one's needs to meet but my own. I spent a great deal of time wandering from cafe to coffee house, greedily reading. In four days I finished five books and at least four of them I shall review here.

Forgive the double up on the two Abigail Reynolds books I read (always a delight), but I fear I wouldn't get the reviews done any other way. I adore Ms. Reynolds' books (she was the direct inspiration for my own reimagining of Pride and Prejudice), and Mr. Darcy's Refuge is a classic example of  her work. Weather is the altered variable in this scenario: Mr. Darcy departs to propose to Elizabeth at the Hunsford parsonage just when an epic storm begins. The two are stranded together for three days, working together to help sustain Mr. Collins' homeless and hungry parishioners. It is the perfect setting for Elizabeth to reevaluate her assumptions about Mr. Darcy.

Something unusual in this variation was the portrayal of Darcy uncle, the Earl of Matlock. Usually he is envisioned rather gently - a foil to Lady Catherine's imperiousness - but in Mr. Darcy's Refuge he is rather villainous. It is his machinations, and a sordid history with Mr. Bennet from their school days, that drives our hero and heroine apart. Instead of Darcy and Elizabeth having to reconcile their pride and prejudices, it is the patriarchs of their families that must be forced into reason. There are also some major reevaluations of Bingley and Jane's relationship, which I found very satisfying. The result is an excellent and unique reimagining which I could not put down. 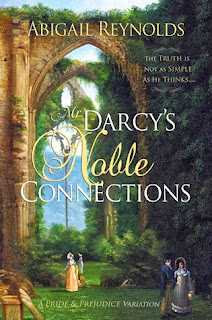 Mr. Darcy's Noble Connections was maybe even better, if only because the plot is more unique amongst Ms. Reynolds' body of work, taking us out of the familiar places and settings and depositing us at Bentham Park, the seat of Lord Bentham, a distant relation of Mr. Darcy and, surprisingly, Mrs. Gardiner. Elizabeth has a history with the daughter of the house, Eleanor, with whom she played as a child until a new step-mother placed distance between the socially unequal friends. Elizabeth receives an urgent note from Eleanor, requesting her immediate presence. Her father has contracted a marriage for her, but Eleanor is in love with their neighbor, Geoffrey Paxton, whose fortune derives from trade. Lord Bentham would never sanction such a marriage, and Elizabeth is asked to act as Eleanor's chaperone as she enjoys what she thinks will be her last few weeks with the love of her life. Mr. Paxton calls on his friend, Mr. Darcy, to do the same.

The time is not long after Darcy's first proposal at Hunsford, so tensions are high as our hero and heroine reluctantly embark on joint subterfuge. The resulting mixups and mayhem are almost more akin to Georgette Heyer than Jane Austen, and I loved every minute of it. What a wildly different take on the classic Pride and Prejudice variation! Also, unlike most of Ms. Reynolds' books, Mr. Darcy's Noble Relations has very little overt sex in it, which I really appreciate (Mr. Darcy's Refuge is a great deal racier). Both books are excellent, and I highly recommend them.

Somehow manage to not have read Abigail Reynolds before, the grand dame of the "What if?" story? Check out my other reviews of her work:

The Man Who Loved Pride and Prejudice

This is my ninth review for The Pride & Prejudice Bicentennial Celebration 2013, hosted by Austenprose. Check out my others below:
Bluebells in the Mourning by KaraLynne Mackrory
Pride and Platypus by Vera Nazarian

His Uncle's Favorite by Lory Lilian
Posted by Alexa Adams at 12:52 PM