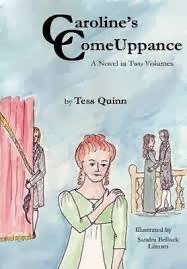 I feel terrible for not having written this review sooner. Actually, terrible is a mild term for how I feel about my abysmal lack of blogging so far this year, especially after working so hard last year to consistently post. There are several reviews in need of writing, but this one is the most delayed. I read Caroline's Comeuppance just after Christmas. My reviews always come out best when I write them quickly, and I'm really kicking myself for not having taken notes on all the specific points I wanted to mention. My apologies to the talented Tess Quinn, who deserves more specific feedback than my watered down reminiscences.

I love redemption tales, and this is the best attempt at making Caroline Bingley palatable I have read. It actually quite reminds me of my absolute favorite story of redemption: that of Elizabeth Elliot in the Mercy's Embrace trilogy by Laura Hile, all of which I glowingly reviewed several years ago (read my praise here, here, and here). Both stories take unlikable Austen women and place them in circumstances that force you to admire and sympathize, no matter how much animosity you might be harboring to the lady in question. Ms. Quinn deserves particular credit for elevating Miss Bingley into a full-fledged heroine while preserving all the irritating attributes with which Austen originally endowed her: no small feat.

The book's title, as well as the first half of the tale, gave me no notion that I was on a journey towards actually liking Caroline Bingley. Darcy has announced his engagement to Elizabeth, but Caroline is not ready to admit defeat. After overcoming her initial impulse to scream and sulk, she is back in the society of the loving couple, throwing herself in Mr. Darcy's way and making a fool of herself. This we've seen before, and I was wondering how, with more than half the book remaining, Caroline's seeming recognition of the futility of her attempts could possibly be true. What was the lady to do for nearly 200 pages if not behave rediculously? The answer took me entirely by surprise.

Caroline is returning form a London ball alone when her carriage comes upon a scene of espionage, and she finds herself detained by an unknown and dashing captor. Suddenly, the value of lady like Miss Bingley becomes abundantly clear. She doesn't swoon, quake with fear, or scream, like many a damsel in distress, instead becoming indignant, vengeful, and perceptive, even when bound and gaged never for a moment forsaking her dignity. In this trial the true nature of Caroline's personality becomes clear: she is a survivor, and as such, her scheming and social ambitions suddenly seem understandable. I was a entranced by her courage as the gentleman who bore witness to the sight.

Soon she is able to identify her attacker, though pride and interest keep her from betraying him. Soon the proper Miss Bingley becomes an accomplice in Sir John Ravensby intrigues, even donning britches and climbing trees to do so! The rest of the book provides a fairly believable psychological portrait of a pair of lovers existing on the fringe of society: Sir John having been an unwanted second son, and Caroline struggling against the stigma of fortune derived from trade. They are, of course, perfect for each other, and once their romance took off I could barely stand to put the book down.

I also really loved the perspective of Allen, Caroline's lady in waiting, who has an innate sympathy for her demanding mistress which only grows as the lady becomes more vulnerable. Her story provides the initial inlet into sympathizing with prickly Miss Bingley and makes the novel more rounded than it would otherwise be. I love the fact that Caroline is just as selfish and conniving at the end of the story as she was in the beginning, but with the proper man by her side, she is able to leverage her natural gifts to a higher purpose. Loved it! A great, feel-good Pride and Prejudice continuation, sure to enrapt the susceptible Janeite.
Posted by Alexa Adams at 3:47 PM