Being Mrs. Bennet: Chapter One 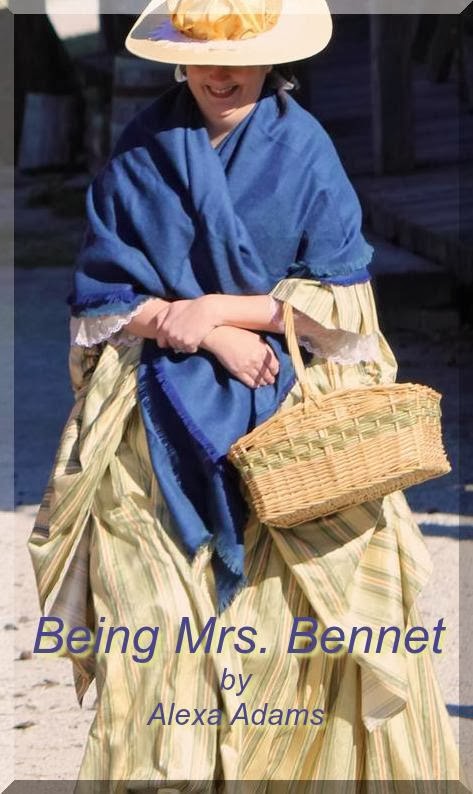 I need to blog! And I need to vent a little. This is entirely off the cuff, though I began the story years ago ...

"That's my shirt! I bought it at the concert. You weren't even there!"

"Whatever, Kitty! You wore my skirt last week, and I didn't make such a big deal out of nothing."

"But I was going to wear it today!"

Not yet! Alison Bateman prayed, pulling the covers more firmly around her shoulders and squeezing her eyes shut determinedly. If she were lucky, her dream of sitting aboard the deck of a mammoth cruise ship, drinking some outlandish tropical cocktail might resume.

"Mom!" someone thumped on the bedroom door. "Lydia's wearing my new t-shirt! Make her give it back!"

No! Turquoise waters and muscled pool boys were already fading from her grasp, so she might as well open her eyes, but they refused to budge.

"Mom!" more knocking, now accompanied by the voice of her youngest daughter. "Kitty is always borrowing my clothes without asking and I never pitched such a fit about it. It isn't fair."

She heard her husband sigh and felt him move about the bed. They had spent a fortune on memory foam, only to realize that it was his shifting of the covers that woke her in the night. She clutched her corner of the quilt more firmly, so his turning wrenched the sheet off her instead. Now the bed would be more difficult to make. Tom laid a hand to her shoulder and gave it a tiny shake.

A chorus of thumps and "Moms!" bore witness to his words.

"Why can't you help them for once?" she groaned.

"They are calling for you," he retorted, finalizing the argument with a yawn, stretch, and scratch, before lazily kissing his now incurably awake wife on the forehead and stumbling towards the bathroom.

She stared at the ceiling, listening to her daughters holler and pound. These two were more challenging than the elder three combined, and she barely had the energy and tolerance to cope with them any longer. Yet persevere she must, for it was entirely her fault. She should have known better than to offer fate so irresistible a temptation as to name her five daughters after the Bennet girls in Pride and Prejudice.

It began in innocence. Tom's mother died of cancer while she was pregnant with the beloved lady's first grandchild. Jane was not a favorite name of Alison's. There was a Jane she had gone to school with and hated violently, and she wanted to call her daughter Emily, but how could she deny the request when Tom made it so soon after his mother's death? The touching memorial to her memory was readily agreed to. A few years later, when she was again pregnant, she joked that if it were a girl she should be named Elizabeth, just like the best sisters from her favorite book. But when her mother Mary died, and she become pregnant once more with girl, the connection to Jane Austen's characters continued. It should have stopped there. She never wanted more than three children.

But Tom wanted a boy. One more child. Alison was certain before she could even confirm her pregnancy that something was different. She had never been so tired before, nor so ill, either. Her first ultrasound confirmed the truth. Two heartbeats. A few months more and they would know the genders. The mystery was a given: two girls, of course. In a moment of pique, Alison insisted they must be Kitty and Lydia, and somehow it stuck. Now she was paying the price.

"Mom!" the twins shouted in unison. Alison sat up, donned her bathrobe, and confronted her daughters.

"Girls!" she cried over their simultaneous accounts, which began to assault her the moment the door opened. "It's not even 8 o'clock, and a Saturday, too! What are you even doing awake?"

Both girls stared at her, slack jawed. They were not identical, but mannerisms and habit made their likeness remarkable. Kitty, the elder by less than a minute, was slightly shorter, her hair not quite so dark, and her eyes more round than Lydia's. They were both healthy and attractive teenage girls, and Alison was proud of the image they presented. If only they didn't insist on acting so dunderheaded, and if that mischievous smile belonging to her youngest didn't conjure instant images of Julia Sawalha as Lydia Bennet to their mother's brain! Now, as both stared at her incredulously, Alison knew at once she had forgotten something important.

"Oh, of course it is," Alison smiled, relieved the day's event required little from her. All she had to do was smile and take pictures and play supportive momma. Then she frowned. "Why does it matter what you wear, then? Are you not going to be in your uniforms all day?"

"Because we're going to shelter first, of course!"

"Dame it!" Alison exclaimed, adrenaline instantly slamming her into sixth gear. "Tom!" she yelled. "Get int he shower, now!" Drawers began flying open, as Alison hurriedly pulled out appropriate attire for herself and her husband. "I have to pick up food from Julia Simons and Tracy Reynolds on the way, and we have to be there by nine to serve!"

"But what about my shirt!" Kitty whined.

"I can't think about that right now, dear. I want you both in the car in ten minutes, and make sure you bring all your gear. We are not coming back here for sneakers, ribbons, skirts, sweaters, socks, or shoes before the game, so double check to make sure you have everything you need."

"Yes, ma'am." They said in unison, skittering down the hall in response to their mother's no nonsense voice. Alison smiled after them. Their daughters might share the same names, but she was no Mrs. Bennet. She kept her girls tight in hand. With the twins, it was necessary.

Yet all the girls seemed to bear a surprising resemblance to their namesakes. Perhaps she looked for it, or maybe they were influenced by it: either way there was no denying Jane was sweetness itself, Elizabeth brilliant and vivacious, and Mary proudly geeky. Of the two youngest, Lydia was more inclined to lead, and Kitty to follow. Alison had always found the similarities amusing, until the twins discovered boys.

It took fifteen minutes, but soon the entire Bateman clan was in the Volvo and pulling out the winding driveway of their Baltimore County home, Alison in the driver's seat. Jane and Elizabeth being at college, the entire clan was really two short. Alison never understood why it had felt easier to horde them all around when all seven were present, unless it was the pacifying influence of the eldest.

The charity event had been Alison's own idea: a community service project for the squad. Something that would build character, and look good on a college resume. How she could have forgotten it was remarkable. I must be slipping, she thought, for it was a rare thing for to forget any commitment. She had far too many not to be well organized, between raising a family, supporting her husband, and running the small business she started when the twins first went to school, selling handmade journals online. The business brought in a tidy profit and made her feel as if her business degree hadn't been entirely wasted. As soon as the twins were off to college, she would sell it and try to find a job in financial services, where she began her career years ago. If my brain hasn't gone to mush by then.  Listening to her daughters, she felt pretty hopeless on that score. She merged not the beltway.

How did I ever become Mrs. Bennet? she wondered, chuckling softly at the thought.

Tom looked up from his cell phone and at her with curiousity. "A penny for your thoughts?"

In the back seat, the girls argued.

"I just was wondering what perverse impulse made me name our children after Austen."

"Nothing new in that," he smiled, looking back to his email. She watched him typing with his thumbs and marveled that he was almost as fast as their daughters at it, which is why she didn't see the jeep that was merging into her lane.

"Look out Mom!" someone screamed, and Alison only saw the other vehicle in time to expect the impact when they hit, and then there was nothing.